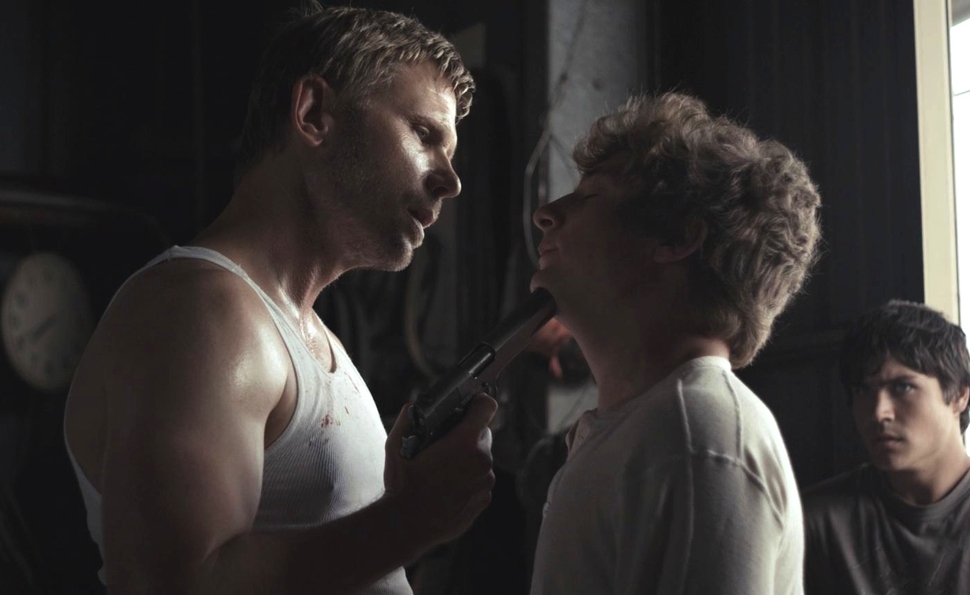 It must take incredible nerve to namedrop Jim Thompson in the second scene of a first feature—or any scene, really, of any movie. But everyone involved in Bad Turn Worse clearly has nerve to spare, from co-directors (and brothers) Simon and Zeke Hawkins to too-perfectly-named screenwriter Dutch Southern. It’s a testament to just how far that kind of confidence goes that until the film’s final act, the filmmakers and cast manage to brazen it out.

Bad Turn Worse aims to do with Thompson what Brick did with Dashiell Hammett, but while Rian Johnson’s debut—a high-school film dressed up as a noir—never rose above self-conscious mimicry, at its best, this film feels like the genuine article. The great insight here is that the soured-over shiftlessness of Thompson’s characters is perfectly at home in the long summer between high school and college. It doesn’t hurt that the film is set in a small town outside of Corpus Christi, the kind of place that, as the narrator of Thompson’s Pop. 1280 memorably put it, “is just about as close to the asshole of creation as you can get without havin’ a finger snapped off.”  Protagonist Bobby (Jeremy Allen White) and his friend Sue (Mackenzie Davis) are headed for college and freedom—the film was originally titled We Gotta Get Out Of This Place—but their friend B.J. (Logan Huffman) emphatically isn’t. When BJ shows up at the Whataburger flush with cash and suggests they have one last blowout before the summer ends, neither Bobby nor Sue ask many questions about where the money came from. As it turns out, it came from a safe belonging to Giff (Mark Pellegrino), a tinhorn crook who feels pretty strongly that everyone who helped spend it should help pay it back. Fortunately, Giff knows just where the three hapless kids can steal more than enough money to make things right.

Pellegrino gives Giff the right mix of evil and stupid (he pulled off the same trick when playing the hitman in Mulholland Dr.), but the standout performances here are the high-schoolers. Mackenzie Davis embodies a very particular sort of senior: the best-looking, smartest person in the room who knows she’s slumming, and isn’t as good at masking it as she thinks. Logan Huffman has a lazy charm floating above bottomless resentment and malevolence.  And Jeremy Allen White, with a mop of disheveled hair and eyelids permanently at half-mast, does the classic Thompson thing where sleepy hides crafty.

Bad Turn Worse takes its best shot at the slow-motion apocalypse that was Thompson’s specialty, and most of the film is beautifully claustrophobic. Jeff Bierman’s cinematography is as yellowed and sandblasted as Pierre-William Glenn’s in Bertrand Tavernier’s Pop. 1280 adaptation Coup De Torchon, and the locations—some of it was shot in Taft, Texas, pop. 3,064—look as doomed as the protagonists. Unfortunately, however, the last act of the film is a disaster, filled with too-neat solutions and monologuing villains. (It’s never the right decision to have a character say, “It was allllll part of the plan. All of it.”) But there are a few shots that live up to the Jim Thompson comparison the filmmakers brashly invite: a pan that makes a wind turbine somersault across the bottom of the frame like a tumbleweed, a perfectly framed establishing shot of a sad little sheriff’s office. In these moments, Bad Turn Worse lives and breathes in the same sorry place where Thompson’s novels are set: a sort of American Sargasso Sea, where sails hang slack and useless, and the still water lets rotten things bloom. Like high school.