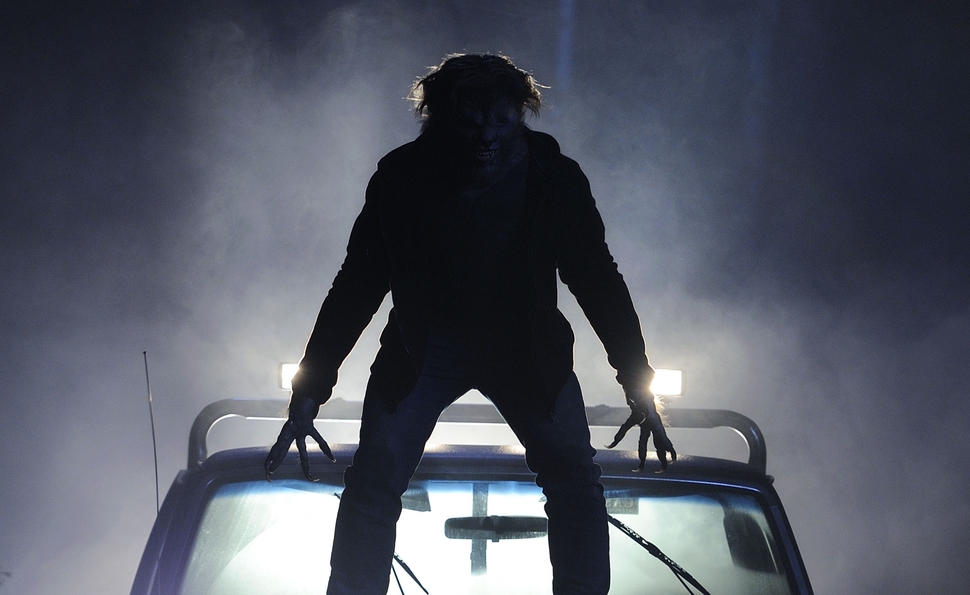 Too bad: Wolves is not an ante-upping James Cameron sequel to Wolf, Mike Nichols and an uncredited Elaine May’s 1994 exposé of lycanthropy in the publishing industry—the movie wherein Jack Nicholson pees on James Spader’s shoes.

Instead, this feature directing debut from X-Men, X2, and Watchmen screenwriter David Hayter is basically a bloodier, drastically more hirsute remake of Footloose set in the sleepy Canadian tax haven of Lupine Ridge, where most of the residents are actually… well, if you guessed “vampires,” you’re close. But Hayter burns through that shocking reveal early—in the title of the movie, in fact—giving his seldom funny, never scary fresh-faced horror-Western a listless quality, even at its slender runtime. An American Werewolf In London and The Lost Boys weren’t exactly coy about their premises, either, but they still managed to be funny and sexy and strange.

Lucas Till—Havok in the current cycle of period X-Men pictures—is dull and dewy-looking as Cayden, a high-school hero (“in a town where football was the one true religion,” as his useless voiceover narration says) who goes on the lam after losing control of his furry alter ego during a heavy petting session with his girlfriend, then wakes up to find his parents dismembered. That voiceover suggests his desperate existence as a fugitive goes on for weeks or months, but it isn’t enough time stop the TV news from talking about “The Cannibal Kid” every time he walks into a place that has a TV. An encounter with a mysterious stranger in a biker bar who seems to understand his problems sends him to Lupine Ridge. (The definition of “lupine” is helpfully provided, which makes more sense than those scenes in Interstellar where one brilliant astronaut tells another what a wormhole is.) Cayden’s arrival instantly upsets the balance between the docile citizenry and the bullies led by Connor (Aquaman-in-waiting Jason Momoa), who signals his dominance by smoking a pipe with a tiny skull on the end of it and wearing more eyeliner than anybody. Stephen McHattie, the genial old-timer who hires Cayden as a farmhand, seems like the only friendly face, but he spends most of his screen time talking about racial purity and diluted bloodlines, so who knows.

The last-act confrontation between Cayden and Connor is protracted by a twist attentive viewers will smell from a distance of miles, but there’s some impressive work from the makeup and creature-design department. Elsewhere, the visual effects are of the weightless and unconvincing digital variety, relying heavily on the slow-mo Totally Extreme Awesome Vision technique Zack Snyder employed so pointlessly in Watchmen’s hand-to-hand melees. That film’s delight in slo-mo violence was actually at loggerheads the material; here it’s simply a boring means of concealing shoddy fight choreography.

With his broad, flat face and sleepy eyes, Till looks more thoughtful and interesting once he lets his beard grow, so to speak. Even though Wolves is set mostly at night, cinematographer Gavin Smith gives the picture a glossy, mystery-obviating look that reinforces the sense this is a CW TV show rather than an R-rated feature—and an oddly tame one, save for the scene where Till-owulf comes to the aid of a hooker who’s being beaten up by a pair of truckers. One shot of an adolescent-looking girl being hit in the face by a man twice her size would suffice to convey what’s happening, but Hayter finds it necessary to show her being struck again and again and again. The savagery is so over-the-top, it’s natural to wonder if the victim of the attack is in fact a werewolf and the whole scene is a setup to lure Cayden into changing. It isn’t. Hayter doesn’t seem to have given it much thought, but it’s the only scene in the film too powerful to ignore.