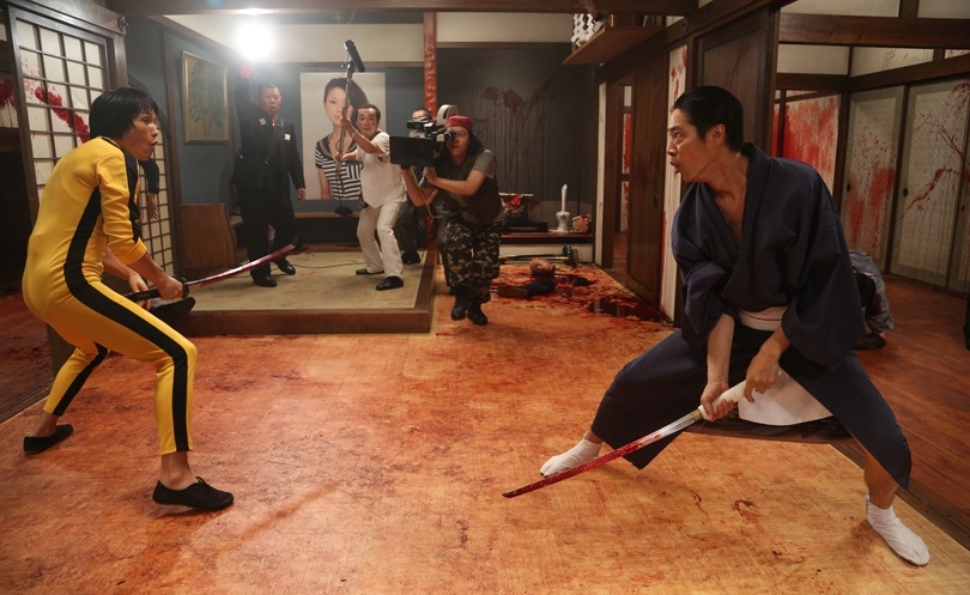 Why Don’t You Play In Hell?

More than an hour into Why Don’t You Play In Hell?, the latest hyper-manic effort from cult director Sion Sono, the two major strands of the narrative—one about a collective of eager young moviemakers called “The Fuck Bombers,” the other a bloody yakuza war—finally come together in an extraordinary cosmic coincidence. The binding force? Projectile vomit. Such is Sono’s cheerfully juvenile spirit, which informs every frame of his work with a breathless, movie-crazy energy that’s rarely curbed by discipline. (His 2008 epic Love Exposure is a four-hour treatise on Catholicism and upskirt shots.) Sono’s films are a throwback to the Japanese rebel youth films of the 1960s and 1970s, when directors like Kinji Fukasaku (Blackmail Is My Life) and Nagisa Ôshima (Cruel Story Of Youth) applied the liberated style of the French New Wave to an era of discontent, but they have their own distinct strain of anything-goes whimsy. It’s completely in character for projectile vomit to serve as a structural fulcrum in a Sion Sono film, though mileage may vary as to how much of his antics a viewer can take.

Alternately exhilarating and tedious, Why Don’t You Play In Hell? is Sono’s tribute to moviemaking—specifically an elegy to 35mm film, though the tone could hardly be called mournful. Wearing a Cannes T-shirt and an ever-present goofy grin, young Don Hirata (played later by Hiroki Hasegawa) leads a quartet of amateur filmmakers, including a lead actor dressed in Bruce Lee’s yellow tracksuit from Game Of Death and two camera operators who specialize in dolly movements and handheld shots. They don’t know what they’re doing, but “The Fuck Bombers” make up in oblivious enthusiasm what they lack in talent and connections, and they keep their hapless collective going for a decade. Meanwhile, yakuza boss Muto (Jun Kunimura) seeks revenge against gangland rival Jun Ikegami (Shinichi Tsutsumi), who failed to knock him off thanks to the knife-work of Muto’s wife (Tomochika), who goes to jail for stabbing most of Ikegami’s crew. Ten years later, as Muto’s wife is about to be sprung from prison, he’s searching for a big-screen role to immortalize his daughter Michiko (Fumi Nikaidô), who hasn’t acted since appearing in a toothbrush commercial years earlier. And that’s where Hirata and the gang finally—eventually—get their big break.

Once all sides come together for the inevitable cinematic bloodbath, Why Don’t You Play In Hell? turns into a joyful meta-movie about the relationship between genre filmmakers and their outrageous pulp creations. The yakuza thriller tends to be full of stone-faced bad-assery, but Sono doesn’t take any of it seriously. He fills the movie with goofy details like henchmen who give up suits for kimonos, or gangsters so disposable that nine of them are beheaded in one mighty swing of the blade. Sono feels a plain kinship with Hirata and his cheerful “Fuck Bombers,” who either have no ability to separate reality from fiction, or are too excited by the footage to care. For them, there are many worse things worth dying for than making a great movie.

Why Don’t You Play In Hell? isn’t a Sono worth dying for, though it impressed enough people to win the Midnight Madness Audience Award at the 2013 Toronto Film Festival. Sono’s surfeit of visual ideas—and his obvious affection for a dying medium—isn’t checked by an ability (or interest) in controlling or refining them; he’s all id, no superego. His characters are likewise defined by unchecked exuberance, especially Hirata, whose passion reads as dim and insufferable until it finally finds a legitimate outlet. Fortunately, the payoff is joyous, a kind of Cinema Paradiso for cult-movie sickos. If 35mm is going down, Sono suggests, it’ll do so in style.

GoWatchIt: Buy. Rent. Stream Why Don’t You Play In Hell?