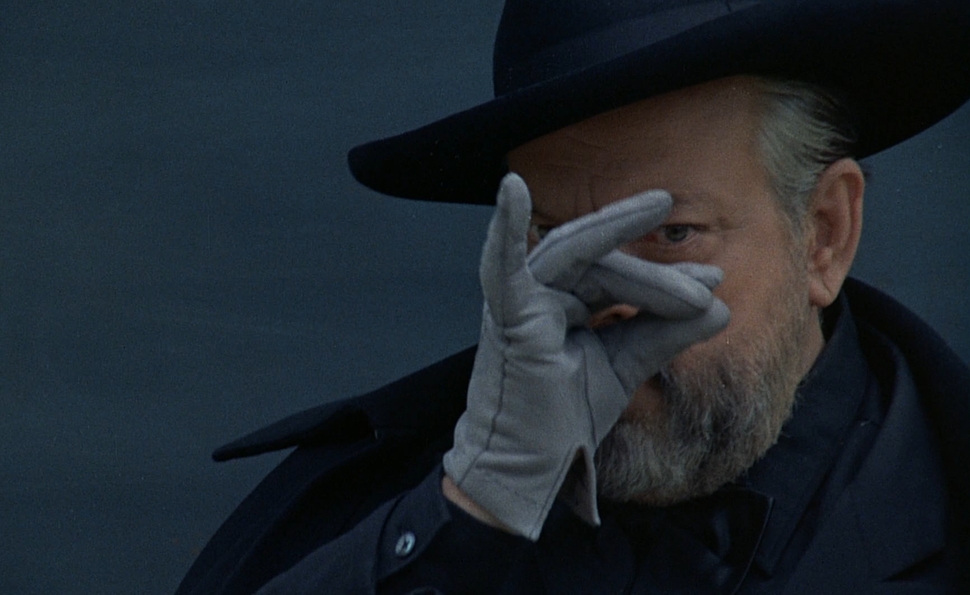 When Orson Welles made Citizen Kane, he had so many innovative ideas that some of them had to wait for the trailer, which he filled with staged behind-the-scenes footage that framed the cast against film equipment. He narrated it himself, without making an appearance, and while revealing virtually nothing about the contents of his film. It’s a dynamic piece of filmmaking that doubles as a sleight-of-hand act, one that builds excitement and intrigue for Citizen Kane through, in Welles’ word, “ballyhoo.” Welles knew whereof he spoke. In a 1975 interview with Tom Snyder included on the new Blu-ray edition of his 1973 film F For Fake, Welles speaks of his lifelong interest in magic and illusion, an interest that extended to a magician’s gift for puffing up an act for customers. Even when selling what would come to be regarded as the greatest film ever made, he took on the air of a self-promoting flimflam man. That interest culminated in this documentary, of sorts, about the magic, con artistry, and forgery that feeds into a meditation on art, life, and beauty.

Welles casts himself in the role of host, as well as narrator and co-conspirator. The film opens with one sort of magic trick and closes with another, between exploring the intertwined stories of famed art forger Elmyr De Hory and his biographer, Clifford Irving. One story would be enough for the movie. The Hungarian-born De Hory developed an uncanny ability to imitate the styles of Picasso, Modigliani, Matisse, and others. No mere copyist, De Hory created art that could, and did, pass for originals, sometimes ending up in some of the world’s most famous museums. At least that’s how De Hory tells it. With such a subject, and in such a film as F For Fake, it’s hard to tell where the hall of mirrors ends.

It certainly doesn’t end with Irving. Seen chatting with De Hory in Ibiza in documentary footage Welles inherited from François Reichenbach, Irving appears so relaxed, it’s hard to believe he was already in the process of committing his own act of fraud, in the form of a hoax autobiography of Howard Hughes. The never-published book attracted sufficient attention to draw out the reclusive Hughes, who denied its authenticity in a speakerphone news conference.

F For Fake doesn’t attempt to expose De Hory or Irving, both of whom had been exposed by the time Welles got to them. Nor does it try to understand them. If anything, Welles comes from a place of understanding them already. “We hanky-panky men have always been with you,” Welles says, and while that might seem like odd company for a man of Welles’ stature to invite, it’s worth remembering that he turned a radio adaptation of War Of The Worlds into one of the biggest hoaxes of the 20th century.

His sympathies had only deepened over the years. A contempt for “experts” who claim an ability to sort the real from the fake runs through F For Fake, and it’s easy to hear the frustration of a man who’d struggled with hostile studio gatekeepers and sometimes-indifferent critics for decades. A respect for art runs parallel to that contempt, one that finds its fullest expression in a lyrical monologue against the backdrop of Chartres Cathedral, which Welles describes as “the premier work of Man, perhaps, in the whole Western world.” It’s a tour de force performance in a two-and-a-half minute sequence that has nothing and everything to do with the rest of the film, one that surrenders to a towering beauty that strives to touch divinity, and gets as close as an any earthly work can. What does it matter that it’s anonymous, and the names of those who built it forgotten and subsumed by time?

Welles lived for 12 years after completing F For Fake, but he never completed another feature (though there are some signs that his long-discussed The Other Side Of The Wind may finally surface). It’s fitting, then, that the film plays like the work of a creator trying to grapple with the big issues before the clock runs out. Co-written with Oja Kodar, Welles’ offscreen partner and collaborator for the last decades of his life, F For Fake mixes visual styles and employs an aggressive, faster-than-the-eye approach to editing. It’s a whirl of a film that spins first in one direction, then the other, but keeps returning to the man at the center, who saw some lifelong obsessions reflected back to him by a pair of frauds, and came to question the usefulness of distinguishing between truth and illusion. Welles caps it with a final illusion of his own, then steps back to reveal how it was done. That’s the scheme of the film in miniature, though it ends up provoking more amazement than disillusion. It’s the act of a magician emptying out his bag of tricks, only to find more bags and more tricks inside.

All but one of the Blu-ray features, the Snyder interview, come ported over from Criterion’s 2005 DVD edition. It’s a generous selection even by Criterion’s standards. “Almost True: The Noble Art Of Forgery” is a 52-minute 1997 documentary the disc describes as “the film F For Fake might have been had Welles played it straight,” which is code for “informative-but-dull.” Also included: Hughes’ press conference debunking Irving’s book, a 60 Minutes interview with Irving from 2000 following up on an earlier interview in which he swore to its authenticity (he’s semi-apologetic), an audio commentary with Kodar and photographer Gary Graver, a nine-minute trailer for the film that’s its own work of art, and an introduction by Welles’ friend and collaborator Peter Bogdanovich. The jewel in the crown, however, is the 88-minute 1995 doc Orson Welles: The One-Man Band. Though the approach, inspired by F For Fake, is a bit elliptical, it’s a treasure trove of footage from never-completed Welles projects, ranging from a filmed reading of Moby Dick to a generous selection of footage from The Other Side Of Midnight.