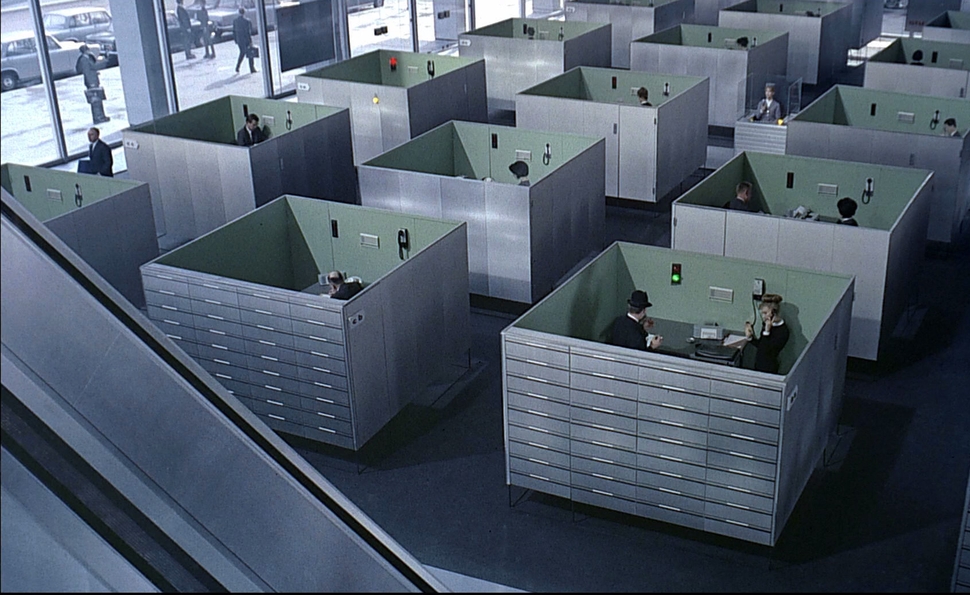 In one of the many bonus features in Criterion’s outstanding The Complete Jacques Tati Blu-ray box set, French filmmaker Olivier Assayas suggests that Tati’s four best-known films—Jour De Fête, Monsieur Hulot’s Holiday, Mon Oncle, and PlayTime—form an arc, telling the story of France during the post-World War II years of economic expansion and urbanization sometimes called “The Glorious Thirty.” Tati starts in the French countryside, then tours the coast, moves to the suburbs, and finally ventures into the city. At every stop, his films observe a nation in transition, becoming more modernized, automated, and alienating. By the time Tati reaches Paris in PlayTime, the old France has been reduced to reflections, seen fleetingly in the glass doors of featureless skyscrapers.

The man who was born Jacques Tatischeff was one of the greatest comedians who ever lived, even though his movies were only sporadically laugh-out-loud “funny.” A skilled mimic with a strong anti-authoritarian streak, Tati came up through the music halls, doing a pantomime act—an imitation of various athletic endeavors under the titles “Silent Sport” and “Sporting Impressions”—that was renowned as much for its accuracy as its humor. In an interview from the TV series Omnibus included in The Complete Jacques Tati, Tati insists that to mime riding a horse, he had to get good at riding horses, and says, “If you want to be funny on a bicycle, you have to bike quite well.” One of the reasons it took Tati so long to make films was because he’d spend years making mental notes about the quirks of human behavior and the limits of progress. The Tatischeff family was in the picture-framing business, and in way, so was their most famous son. His job was to spot something small but telling about the way people lived, then show it to them.

The magnificence of The Complete Jacques Tati is in the way it puts a frame around the framer. The box set’s title doesn’t over-promise. It includes all five of Tati’s theatrical features, one made-for-TV film, the various shorts he made both before and during the height of his fame, a few TV commercials, and one significant unfinished documentary. In addition, The Complete Jacques Tati adds hours of vintage interviews and retrospective documentaries, and nearly every film is accompanied by an extensive visual essay by Tati scholar Stéphane Goudet. Tati gets analyzed, honored, and argued against. And whenever viewers get tired of all the talking about Tati, they can return to the actual movies, where there’s often almost no talking at all.

The 1930s Tati shorts offer a useful snapshot of some of what Tati was doing onstage at the start of his career (particularly in 1936’s “Soigne Ton Gauche,” which takes a lot from his pantomimed boxing routine), as well as letting fans see Tati perform long scenes with dialogue, which isn’t something he did much in his features. But the best place to start with the Criterion set is either with 1949’s Jour De Fête, available here in its original black-and-white form and in color-tinted and full-color versions (the latter shot simultaneously with the black-and-white one), or with 1953’s Monsieur Hulot’s Holiday, available in its original form or in a later Tati edit which is shorter, with less extraneous dialogue. These two films played around the world, making Tati a star. They’re the most purely comedic and accessible of his features.

Jour De Fête has Tati bringing back the silent-era physical comedy of Charlie Chaplin and Buster Keaton, with the director playing a country mail-carrier named François, who’s inspired to work as quickly and efficiently as the U.S. Post Office. Tati featured this rapidly bicycling postman character earlier, in both “Soigne Ton Gauche” and in the 1947 short “L’Ecole Des Facteurs,” but Jour De Fête sees Tati building out the world around François, finding humor in the leisurely pace of country living, while figuring out how to use a feature’s length and a big screen’s size to build gags. Jour De Fête features a quintessential bit of Tati business when François swats away a bee while he’s pedaling down the road in the background of a shot, after which the bee moves to a farmer standing in the foreground, then back to François. Through sound effects and gestures alone, Tati invites viewers to “read” the screen, similar to the way a cartoonist guides a reader’s eye from panel to panel.

Monsieur Hulot’s Holiday experiments with complex arrangements within the frame even more, while also introducing Tati’s most popular character, Mr. Hulot: a well-meaning bumbler perpetually leaning forward on his tiptoes. Largely plotless, Monsieur Hulot’s Holiday mostly consists of setpieces wherein Hulot disrupts his fellow vacationers, but the movie also serves as a charming trip to the beach in and of itself. The film has a gentle sense of whimsy, and its observations on life’s little annoyances—like the distracting clunk of a set of swinging doors—are benign. Tati does have some fun with the way businessmen still do business and intellectuals still pontificate, even when they’re supposed to be taking a break. And his staging remains marvelously inventive, as when he illustrates a Hulot ping-pong game by showing him in the back of a shot, repeatedly running awkwardly in and out of a rec room.

Tati’s ambition grew exponentially with 1958’s Mon Oncle and 1967’s PlayTime, while his point of view got sourer. Unlike the location shooting of Jour De Fête and Monsieur Hulot’s Holiday—compared to Italian neorealism by some critics—both Mon Oncle and PlayTime rely on elaborate sets, with the former mostly taking place in an over-designed “house of the future” owned by Mr. Hulot’s rich relatives, and the latter filmed over the course of a year in a built-from-scratch city block dubbed “Tativille.” With these two films, Tati commented more directly on the changes in French society, drawing up little sketches of people forcing themselves into dehumanizing, uncomfortable positions in the name of staying stylish or technologically current. In Mon Oncle in particular, Tati shows Hulot still living in an old Paris that’s in the process of being dismantled for more modern architecture, which means Hulot’s life is dominated by rubble, clouds of smoke, and the sterile new buildings that Hulot finds hard to navigate.

Both pictures are brilliant, but Mon Oncle’s limited scope makes it come off a little meaner. PlayTime, on the other hand, is a work of unparalleled genius—so unparalleled, in fact, that back in 1967 a lot of audiences weren’t even sure how to watch it. (The movie bombed so badly that Tati never really recovered.) Taking full advantage of the 70mm format, Tati democratized the motion-picture frame, staging simultaneous action in nearly every quadrant and plane, and letting viewers decide what was important to follow. If Jour De Fête is a comic strip, PlayTime is a mural. It’s possible to make it through all two hours of PlayTime and have no idea what just happened. But it’s also possible to watch PlayTime a dozen or more times and still find something new in its depiction of a cramped, officious Paris. As Mr. Hulot bounds from closed-off cubicles to a zoo-like apartment complex to a chaotic nightclub, Tati stands as far back as he can to watch, confident that the single-minded hustle and bustle of the mob will reveal its own meaning.

In an interview in the 1970s, before his 1982 death, Tati said, “PlayTime will always be my last film,” meaning that it was the last time he’d have all the time and resources he needed to realize his vision. But the more modest 1971 comedy Trafic (with Mr. Hulot as an automotive engineer calamitously making his way to Amsterdam for a big trade show) and the 1974 made-for-Swedish-TV movie Parade (a sort of revue, with Tati revisiting his old mime routines between other people’s circus acts) are both sweet and entertaining, with moments of pure Tati magic. The montage of nose-picking drivers in Trafic, or the shot where cars and trucks are seen moving at weird angles in the reflection of a window, are superior cases of Tati seeing something that others mightn’t. And Parade, while slight in content, is conceptually bold, with Tati blending film and videotape and obliterating the lines between spectator and performer with equal abandon.

But for the best example of how the world was robbed of Tati’s gifts too early, look to the 1978 short “Forza Bastia,” a documentary Tati’s daughter Sophie completed after her father’s death. Here, the aesthetic principles of PlayTime govern Tati’s approach to filming a muddy soccer match, as he turns his cameras on the crowd, and on the crews trying to get the field into playable shape. Early in his career, Tati recreated ordinary human behavior as a kind of complicated dance/critique. With “Forza Bastia,” he stopped choreographing, and stopped judging, and instead turned his raw material over to his fans, trusting that after 30 years of watching Tati films, they’d understand what they were seeing.

It’s impossible to overstate how valuable the Stéphane Goudet video essays are. They run from half an hour to more than an hour, and include on-set footage, historical context, and comparisons of images from different Tati films. They’re good enough to stand on their own as documentaries. The other docs here vary in quality from overly dry and overly brisk to genuinely clever and insightful. Collectively, they carry on all the longstanding debates about Tati: Was he a reactionary and a misanthrope? Or was he trying to be sympathetic to the way society naturally resolves into mechanical systems, which humans then sabotage?