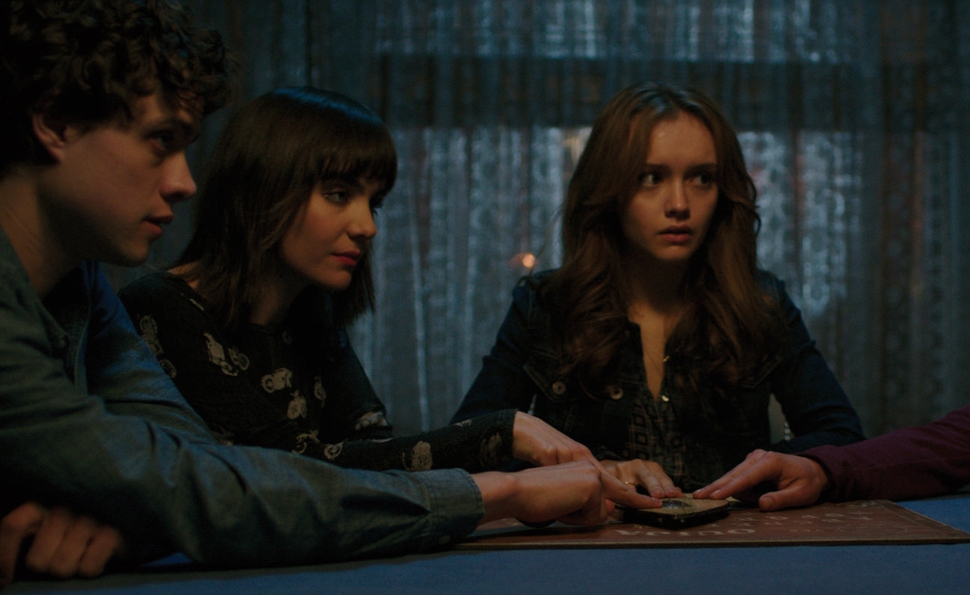 Based on the popular Hasbro board game—formerly a Parker Brothers board game, and before that, a late-19th-century “talking board” for communing with the dead—the generic horror film Ouija has two messages for consumers: 1. The board  is exceptionally durable and cannot be destroyed by fire. (Except under special circumstances; for those, see The Reveal.) 2. Follow the rules. Don’t make them up, like you do with Monopoly.

Those caveats aside, summoning spirits looks like great fun, provided those spirits aren’t trickster demons with outrageously elaborate backstories who will hunt down and murder everyone, whether they remember to say “Goodbye” or not. Corporations like Hasbro don’t often license movies that link their product with mass slaughter, but the game has always relied on divination myths to bring spiritual legitimacy to friends spelling out curse words with the planchette.

In truth, making a movie out of a Ouija board is less challenging than converting something like Battleship, because Ouija boards are tool for séances, which are a feature of many haunted-house stories. And the one fashioned by first-time director Stiles White and his co-writer, Juliet Snowden, isn’t much different from Insidious or The Ring, except for the characters’ apparent mandate to keep finding new reasons to play the game, even if that’s plainly unwise. Olivia Cooke stars as Laine, a young woman trying to fathom why her best friend Debbie (Shelley Hennig) committed suicide. After some poking around, Laine finds the Ouija board the two played with as kids, and brings along four people—her boyfriend (Daren Kagasoff), Debbie’s boyfriend (Douglas Smith), her mysterioso sister (Ana Coto), and a doomed rando (Bianca A. Santos)—to help her contact Debbie’s spirit. They succeed, but their efforts unleash a nastier supernatural force that seems determined to take them out one by one, Final Destination-style.

Though some of the scares are typical of PG-13-rated horror movies, where the biggest shocks are usually friends who appear out of nowhere to say “Hello,” Stiles does better once more spirits are circulating and can be seen through the viewfinder on the planchette. Lifting the planchette to eye level is like putting on the sunglasses in They Live: Suddenly, an invisible world becomes terrifyingly visible. The most pressing issue with Ouija is that Stiles and Snowden cannot seem to write a single interesting line of dialogue. They volley between conversational banalities and whatever exposition might be needed to get the film to its next scary setpiece. And the story they create around Debbie, her spooky old house, and the Ouija board needs lots of explanation, mostly involving dull archive searches and a cache of old photographs, though there’s one genuinely compelling scene built around a mental patient (Farrelly favorite Lin Shaye) who used to live in the house.

Horror films don’t necessarily rely on complex or colorful characters the way other genres do; no filmmaker could use these one-dimensional CW-bots in drama or comedy and expect to get away with it. But in a ghost story where Hasbro contributes most of the novelty, watching a handful of boring, interchangeable teenagers get killed off is an exceedingly modest satisfaction. Perhaps Stiles and company will get things right in Ouija Too? [Planchette moves to “NO.”]