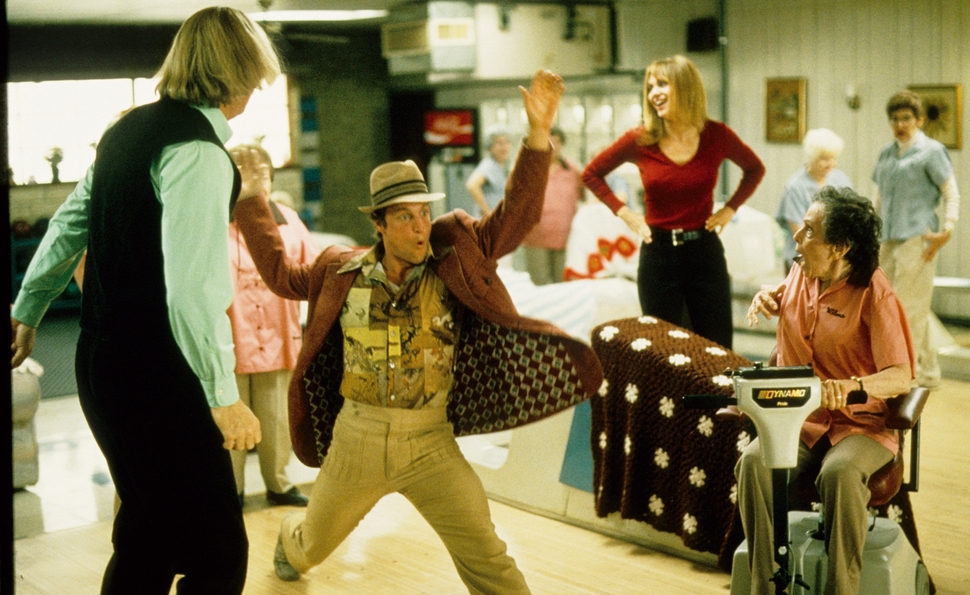 Bowling is generally associated with draft beer and salt-and-vinegar potato chips, and it features athletes who look like moonlighting assistant managers. But professional bowling events are surprisingly austere, more in line with the PGA than the WWE. The exception to that is Pete Weber, a bowling prodigy and self-styled rebel who’s been on and off the tour since 1980, leading a rock-star lifestyle that’s taken him through drinking and cocaine binges, two divorces, and controversy for his antics on the lane. The most notorious of these is his signature “crotch chop,” an advanced form of boo-yah braggadocio that’s common at the local bowling alley, but earned him trouble on tour. What’s funny about Weber is that his bad-boy image—the rude gestures, the substance abuse, the wearing of sunglasses indoors—is in service to a profession where the biggest stars often can’t even make a living wage.

Peter and Bobby Farrelly’s Kingpin makes inspired comedy by channeling the Weber spirit—and the humble reality of the circuit—through the frame of an inspirational sports movie. The fake-out opening has young Roy Munson in small-town Iowa, (almost) scaling a white picket fence and beckoning his dad to play ball with him. Not baseball, but bowling with a homemade set. It’s the origin of an early career that takes adult Roy (played later as an adult by Woody Harrelson) to the 1979 state amateur championship and to the pro tour, where he ousts Ernie “Big Ern” McCracken (Bill Murray) and holds up a giant check from Odor Eaters. First prize: $1,500.

For the Farrellys, the sweet/gross populists of American screen comedy, bowling is the perfect sport for affectionate send-up, because it’s a game everyone can play, and because there’s such a disparity between the mystique of bowling’s elite and a prize pool so small that it can’t cover Roy’s car repairs. And though Kingpin eventually heads to Reno for a million-dollar, winner-takes-all showdown, its tone remains comically down to earth. In Roy’s long comeback from his one 1979 victory—when asked later what he did throughout the entire ensuing decade, he replies, “Uhhhhhhh”—he continues to find new ways to hit rock bottom. He loses his bowling hand to an angry mob after a bad hustle, and replaces it with a crude rubber prosthetic on top of a hook. (The Farrellys definitely aren’t above hook-based low comedy.) His inability to pay rent at his fleabag apartment leads to a sexual liaison with his landlord, which results in a horrifying juxtaposition of profuse vomiting, suggestive dialogue (“You really jarred something loose, tiger”), and a Simon & Garfunkel music cue.

The hustler in Roy sees an opportunity when he meets Ishmael (Randy Quaid), a dopey Amish man from rural Pennsylvania who shows some potential, but rebuffs Roy’s offer to develop his talent and take him to Reno. After some Amish-related shenanigans, mainly involving funny accents and beards, Roy and Ishmael hit the road and pick up another hustler, Claudia (Vanessa Angel), who uses her body to distract Ishmael’s competition in cash games. Here, Kingpin turns into a comic twist on The Color Of Money, with Harrelson, Quaid, and Angel all playing supremely undignified analogs to Paul Newman, Tom Cruise, and Mary Elizabeth Mastrantonio.

Coming off the shambling road movie Dumb And Dumber, the Farrellys give Kingpin the same loose-limbed, anything-goes approach to lowbrow comedy, from Airplane!-style sight gags to gross-out stunts like Roy guzzling bull’s milk to Murray’s improvisational brilliance. (In the commentary track, the Farrellys recall how Murray would literally throw script pages away, ask what was needed for the scene, then go off. The bad toupées and comb-overs were his idea.) Almost two decades later, the film’s political incorrectness plays like a refreshing fart blast in our more timid time, but the Farrellys have never been rude just for the sake of provocation. They just want to make a lot of people laugh. And Kingpin remains their funniest movie to date.

New to Blu-ray, this edition comes with both the 1996 theatrical cut, which is PG-13 and runs 113 minutes, and the 1999 directors’ cut, which is R and runs 117. The Farrellys offer a genial but not hugely compelling commentary track on the latter cut, with behind-the-scenes stories and comments on the cast dominating most of the discussion. A 20-minute featurette, “Kingpins: Extra Frames,” has the Farrellys looking back on the film, but it’s mostly notable for a mid-1990s interview with Harrelson, who starts crying when reflecting on how much he loved working on the movie. It’s sweet.