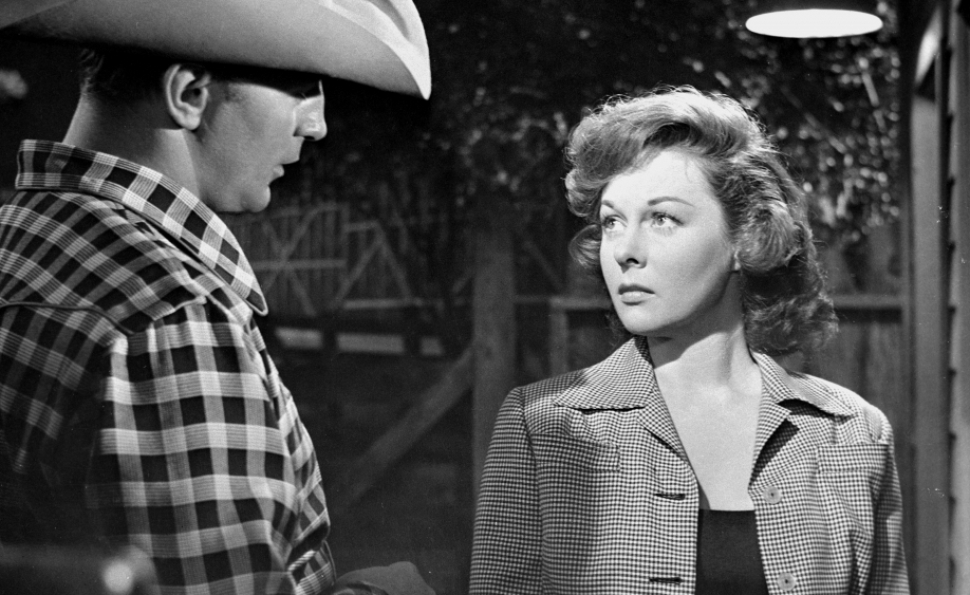 It takes skill to make Robert Mitchum look small. A tall man at 6 feet 1 inch, he has the screen presence of a giant. His sleepy eyes and nonchalant attitude give him a magnetic quality. Even when the characters he plays get knocked down, they’re never diminished. Yet there’s a shot early in Nicholas Ray’s 1952 film The Lusty Men that gives him the vulnerability of a child. A former rodeo champ—or “saddle tramp,” to those without respect for the profession—his Jeff McCloud has left the circuit penniless after getting injured by a bull. Jeff drifts back to his boyhood home and climbs under it, finding a toy gun, a cowboy magazine, and a tobacco tin in which he used to keep his money. For just that moment, time circles back on itself. Looking back on the things that turned him into the man he became, he wears an expression that’s half wistful and half regretful, in a rare moment of privacy that allows him to lower his guard. Then he’s discovered and dragged back into the world of men.

“Cowboys ain’t tough the way they used to be,” laments Booker (Arthur Hunnicutt), a broken-down rodeo veteran, later in the film. But he isn’t exactly right: The Lusty Men has no shortage of tough cowboys, it’s just that the world doesn’t have the same use for cowboys it used to, at least outside of the sometimes-savage spectacle of the rodeo. Jeff takes a low-paying job on a ranch, where he befriends the young married couple of Wes (Arthur Kennedy) and Louise Merritt (Susan Hayward), who profess a desire to save up money to buy a ranch on the land where Jeff’s former home stands. Wes has other sorts of aspirations, though. Recognizing Jeff, he invites him to train him in the arts of the rodeo, in which it soon becomes clear he’s a natural. The two partner together, despite Louise’s skepticism and concern, splitting Jeff’s earnings as they work the circuit from Texas to the Pacific Northwest.

Drawing from a book by Claude Stanush, a Texas novelist and journalist whose work also inspired The Newton Boys decades later, Ray fills The Lusty Men with the often-sad details of rodeo life. The men perform dangerous feats for a few moments of glory—portrayed in the film as more brutal than glorious—and the shot at a fortune, but few find happy endings. Their women wait in the stands, fret, and spend their downtime stewing in trailers that look like cramped parodies of luxurious modern homes. They socialize together and grow sick of one another in bars and hotel rooms. For all the cowboy trappings, nobody in their insular world seems to be enjoying the freedom of the cowboy ideal. Ray alternates intimate interior scenes with fast-paced rodeo sequences, but even these feel penned-in. No matter how hard the cowboys ride, the fences assure they can’t go too far.

Mitchum, Hayward, and Kennedy all beautifully play the tense central relationship. Jeff becomes a father figure to Wes. He’s taken himself out of the game, but recognizes a prodigy when he sees one. (The relationship bears a strong resemblance to the one at the center of The Color Of Money.) Jeff also becomes confidante to Louise, from whom he can barely hide his deepening feelings, feelings she starts to return as Wes’ success distances him from her. They’re playing out a slow-motion tragedy against a backdrop with more tedium than excitement. Ray focuses as much on registration lines and the long downtime between events staged with much excitement and little regard for those participating them. When a rider falls, the announcers note any injuries before announcing the next name out of the chute. Portrayed with Ray’s usual sympathy for outsiders, the central threesome are decent, flawed romantics in a no-win situation as they pursue a sport without winners, just those with the ability to hang on longer than most. But in time, everyone gets thrown.

Just a trailer, and one that proves trailers that spoil too much of the plot have been around for a long time.