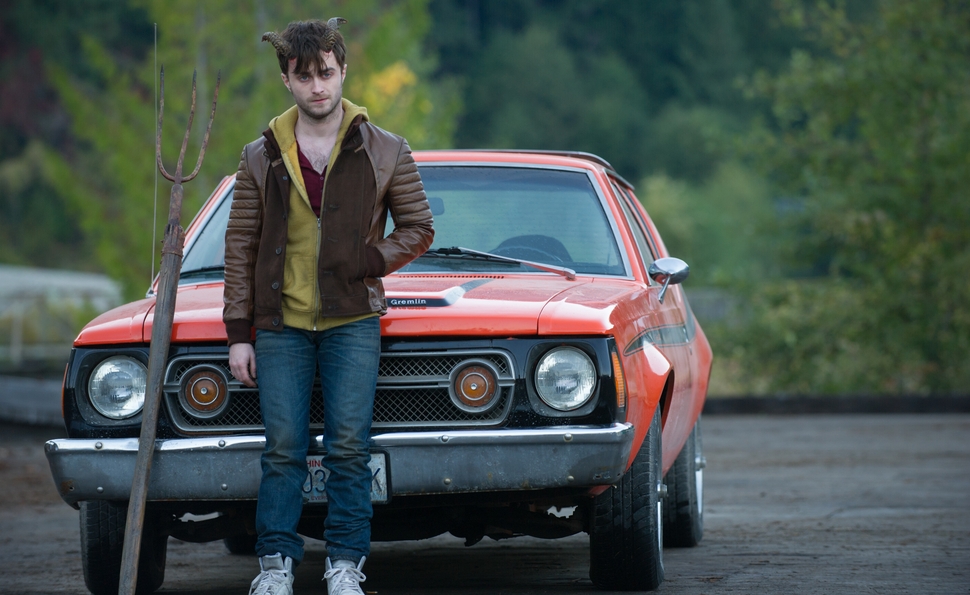 Joe Hill’s writing has an artfulness that makes the implausible seem conceivable. Like his father, Stephen King, Hill writes supernatural stories with a level of detail that grounds them in the real world; unlike King, he tends toward lyricism, and in the case of his 2010 novel Horns, an elaborate metaphor unpacking the relationship between good and evil, and the iconography of both. But that metaphor doesn’t come across onscreen, once all the nuance is stripped away and the story’s bones are bared. In Alexandre Aja’s adaptation, the supernatural often seems silly and arbitrary. Hill uses real emotion to make fantasy seem more believable. The film’s fantasy drags real emotion down into unbelievable territory.

Harry Potter saga star Daniel Radcliffe stars as Ig Perrish, a small-town DJ who’s disintegrating into grief after his girlfriend since childhood, Merrin Williams (Juno Temple), was raped, murdered, and dumped under the treehouse where they staged their lifelong storybook romance. Virtually everyone in town (and presumably out of town, unless his sleepy mountain village happens to boast multiple TV stations with their own roving news crews) believes Ig killed Merrin, especially since he was seen grabbing and screaming at her the night of the murder, when she dumped him. Crowds waving “Burn in hell” signs stalk Ig through town, and those roving news crews follow him everywhere he goes, shouting things like, “What’s it like to get away with murder?” But Ig is more haunted by his personal loss than by the collective condemnation. Then he starts growing horns, the sight of which puts people into a hypnotic state where they confess their most grotesque and lurid impulses, and seek his permission to act on them. Initially baffled, Ig rapidly morphs into a demonic gumshoe, using his evolving powers to hunt down Merrin’s murderer.

There’s a massive mismatch in tones between the film’s best ideas and its worst execution. Hill built an operatic, Faustian story about a man who embraces his own destruction, and sees so much ugliness in the world that he’s willing to tempt others to similar calamity. It’s a retelling of the Lucifer story in miniature, as one man decides it’s better to reign in hell than to just live there without his first love. Aja’s version is a blunt, Ghost Rider-esque superhero origin story about a kid and his devil-themed powers, punctuated by moments of weird comedy. When people want to gush to Ig about the desire to binge on donuts and get fat, or kick a shrieking child in the ass, they almost invariably sport goofy, wild-eyed grins. Their confessions don’t feel like dark, stray impulses loosed from the id, so much as the fruits of a drunken improv game called Ain’t People Awful? The over-the-top humor is sometimes a hoot, as with a scene where Ig uses his powers to set the news crews at each other’s throats, then walks through the combat in slow motion, fire blazing behind him, to Marilyn Manson’s cover of “Personal Jesus.” But the petty comedy meshes poorly with the hero-on-villain action, the graphically portrayed horror of Merrin’s rape and murder, and Radcliffe’s attempts to bring some real pain to Ig.

Aja seems to be emulating Twin Peaks, with its sense of a hermetic, suffocating small logging town full of colorful characters, surrounded by deep woods that mask atrocities, and filled with cozy houses that do the same. (Heather Graham’s small role as a diner waitress, and the beautiful cinematography by Blue Velvet and Wild At Heart DP Frederick Elmes, both back up that impression. All that’s missing is a few lingering shots of owls, or pie.) But the list of suspects isn’t big enough to complicate Merrin’s murder the way Lynch and company complicated Laura Palmer’s killing. Ig still lives near his parents (James Remar and Kathleen Quinlan), his brother Terry (Joe Anderson), and Ig’s childhood friends, lovelorn local bartender Glenna (Kelli Garner), angry cop Eric (Michael Adamthwaite), and Ig’s stiff-but-saintly lawyer and protector Lee (Max Minghella). Outside of that group, the world is largely filled with nobodies who only exist to dump their baggage at Ig’s door. The story feels as small as the setting: Just as it’s a simple, straight shot from single-digit Merrin and Ig shyly meeting in church to their double-digit selves screwing in the treehouse, there’s a straight line between a Butterfly Effect-esque sequence of Ig, Terry, Glenna, Eric, and Lee messing with cherry bombs as kids, and their virtually unchanged dynamic as grown-ups.

Like recent M. Night Shyamalan movies, Horns tends to pull new rules out of its ass every few minutes, and it conveys fairy-tale logic with a leaden, painfully literal approach. Ig gains new powers at convenient intervals, and takes them with the grim-’n’-gritty growl of a demon-themed Punisher as he clomps joylessly toward a final special-effects throwdown. Radcliffe does convincing work with the rage and despair of his role—elements familiar in his work as Harry Potter—but it’s harder for him to sell the idealized “heaven” of his sun-dappled past with Merrin. Lying on a blanket with Temple, giggling through an afternoon reverie that’s meant to stand in for the leads’ entire relationship, he comes across much like Robert Pattinson in the Twilight movies, trying to layer bucolic contentment over a face better made for scowling. Much of Horns reads the same way: Its attempts to force comedy, tragedy, farce, action, and melodrama into the same story never quite fit. It would have been better off just sticking with the scowl.