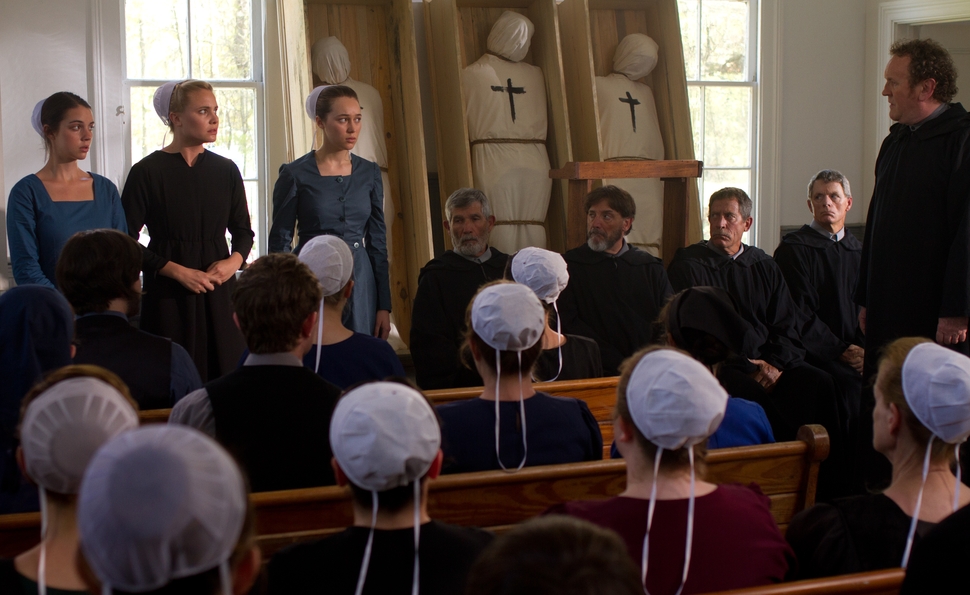 Combining the pseudo-religious hokum of demon-possession movies, the hooded, scythe-bearing serial murder of I Know What You Did Last Summer, and the Amish fervor of the 1980s Wes Craven thriller Deadly Blessing, The Devil’s Hand works itself into a lather from the opening scene and doesn’t let up on the silliness until the prophecy finally reveals itself as true. Or false. For most of the way, it’s a whodunit, stoked by the fears of a community that believes one of the six girls—or five, since one was killed by her own mother after birth—will become the devil incarnate when the clock strikes midnight on her 18th birthday. Which of these comely lasses is the dreaded “Drommelkind”? Or is it religious hysteria that’s the true devil’s hand? The moderately violent answers to those questions are rated PG-13.

After the prologue, The Devil’s Hand cuts to almost 18 years later, with the five girls having grown up best friends, ostracized by their peers and elders. Their habit of swimming “on the far side of the lake,” closer to townie heathens, is just one piece of evidence Elder Beacon (Colm Meaney, in the Ernest Borgnine role) uses to condemn them. Their fiercest defender is Jacob Brown (Rufus Sewell), who protected his daughter Mary (Alycia Debnam Carey) and the other girls from Beacon’s scythe when they were born, and continues to protect her against vicious stepmother Rebekah (Jennifer Carpenter). When the girls start getting killed off one by one, the survivors search frantically for the perpetrator while fending off the threats and suspicions of New Bethlehem’s most cruelly pious. And all the while, Mary continues to experience “episodes” that suggest the Devil has put down his deposit, bought boxes and packing tape, and is ready to move in.

There’s a good horror movie to be made about how the insularity of the Amish could stoke paranoia and fear—and obscure the truth and forbid outside perspective—under these circumstances, but The Devil’s Hand doesn’t have more than a casual interest in Amish rituals and traditions. They make jams and quilts, and behave more or less like the residents of M. Night Shyamalan’s The Village. The body count in the film is fantastically high, between the girls dying off and the adults committing at least three acts of elaborate suicide, but director Christian E. Christiansen, who previously PG-13-ed Single White Female into The Roommate, doesn’t make any of it count. He has all the elements of an exploitation movie—sexy Amish teens! A scythe slasher! Demonic visions! Mass hysteria from people who own pitchforks! Homemade jam!—but no ability to follow through beyond the odd jump scare. The Devil’s Hand may have been a bad movie either way, but at least an R-rated or unrated version would have been naughty, too.