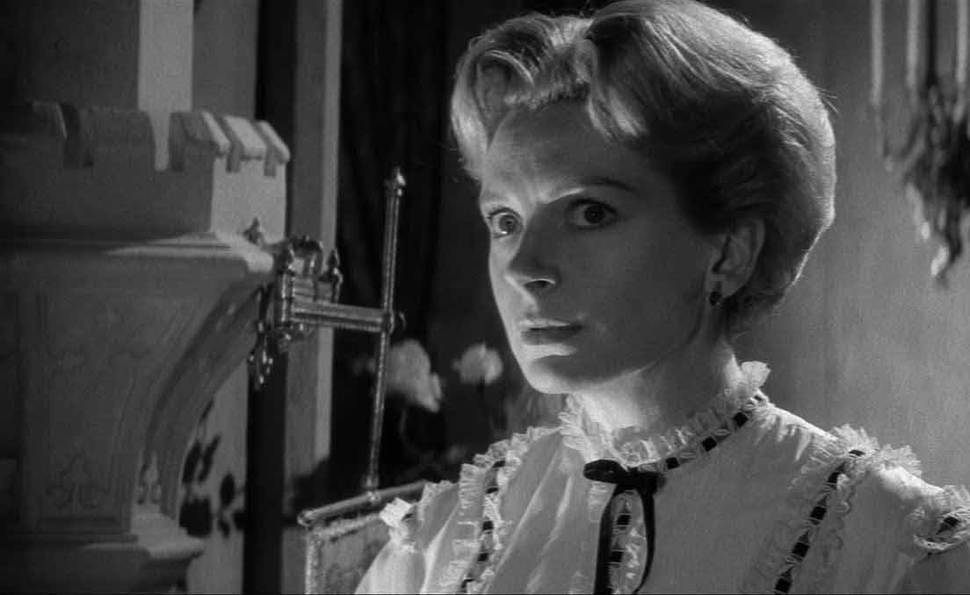 “Sometimes one can’t help… imagining things,” fragile British governess Miss Giddens tells one of her country-manor wards early in 1961’s The Innocents. With that line, nervously delivered in response to a strange, unidentified noise from outside, she re-opens a can of worms that’s been actively squirming since 1898, when Henry James’ “The Turn Of The Screw” was first published. The Innocents, a florid black-and-white adaptation of James’ gothic ghost story, mostly treats the hauntings on a vast country estate at face value. The ghosts are visible to the audience; the children they’re haunting are authentically unsettling, in large part due to Freudian dialogue pointedly punched up by Truman Capote. To the degree the film has any ambiguity at all, it’s largely left for the end. James readers have spent more than a century debating how “Turn Of The Screw” should be read: Is it a story about otherworldly possession, or about one woman turning her paranoia and sexual repression into a fervid fantasy she forces on two innocent children? The Innocents has a fairly firm take on the question. But as Miss Giddens’ forlorn line about her own active imagination implies, there’s still room for doubt.

From the beginning, British director Jack Clayton emphasizes Miss Giddens’ fragility and fear. First seen as a flash of white face and hands against a featureless black background, intensely weeping and praying for the souls of the children in her care, she reads like Catherine Deneuve in Repulsion: beautifully composed in her better moments, but capable of shattering like a dropped porcelain plate. When a neglectful uncle (Peter Wyngarde) puts her in charge of his orphaned niece and nephew, Miss Giddens seems a bit overwhelmed by his trust and the responsibility, but simultaneously grateful—it’s her first position as a governess, and she clearly loves children with the forlorn passion of the unwillingly childless. His firm instructions that she can only have the job if she promises to take “supreme authority” over his estate, and never bother him with any questions or concerns about the kids, raises a second set of alarm bells. Where some governesses might be smugly pleased at being handed absolute authority, Miss Giddens seems worried, as though she doesn’t fully trust herself.

But when she arrives at the country manor and meets her wards, Flora (Pamela Franklin) and later Miles (Martin Stephens), she briefly turns into a Julie Andrews character, all warmth and competent support. While she’s a lax disciplinarian, they’re both uncommonly precocious children with suspiciously adult manners, and they barely take advantage. Then Miss Giddens learns how her predecessor in the governess position died, and what happened to the predecessor’s lover. And she starts seeing the two of them in window glass, or watching the children from afar in broad daylight. Or is she just… imagining things?

In a 1961 New York Times review, Bosley Crowther sneered at the film’s lack of ambiguity, because Deborah Kerr as Miss Giddens seems “excessively normal and alive,” rather than so sexually repressed as to be “quickly labeled psychopathic in this more knowing day.” He sneered that the film’s atmosphere at least “should clobber the gullible,” but that “the sophisticated viewer” would want more terror, or at least more explanation of Miss Giddens’ exact psychological diagnosis. But he’s selling the film tremendously short. Clayton, the director of 1959’s Oscar-winning Room At The Top, and later of The Great Gatsby and Something Wicked This Way Comes, fills the screen with portent and a sense of emotional oppression from the beginning. The cinematography is consistently breathtaking: DP Freddie Francis had a healthy career as a horror director himself, on titles including The Day Of The Triffids and Tales From The Crypt, but was better known for his cinematography on starkly beautiful films like Cape Fear, The Elephant Man, and Glory. (The latter won him an Oscar.) Virtually every frame of The Innocents is either stark and sharp with deep blacks, or packed with ominously florid detail, as if trying to crowd out that darkness. And Criterion’s print is flawless in bringing across images that belong on posters.

But the film rides on Kerr, and on Franklin and Stephens’ coy, knowing performances, which manage to insinuate malice into childish sweetness and Victorian politesse. Kerr’s performance vibrates with complicated tension and vulnerability, as she communicates the internal life of a woman constantly at war with herself, but trying to set the battle aside for the sake of creating an idealized childhood for her charges. Franklin and Stephens are perfectly cast: They seem like wide-eyed innocents, even as she’s petting a butterfly and praising the spider that’s devouring it, or he’s turning a bedtime peck on his governess’ cheek into a disturbing full-on lip-lock. Clayton fills the screen with disturbing images and gives the film around them a constant sense of lushness falling into decay, suggesting the children’s cheerful energy is slowly morphing into something more disturbing. If the white roses shedding petals and falling into rot aren’t psychological enough for Crowther, possibly he should be content with the child-statue, still clinging to the hands of a severed adult-statue, and with a roach wriggling out of its mouth. The film’s symbolism is never subtle, but that doesn’t make it any less effective.

The Innocents ends just as “The Turn Of The Screw” does—abruptly and without explanations, either about the climactic event, or about what led Miss Giddens to such desperate measures. The suddenness of the finale leaves plenty of questions open, and room for the doubt that starts to creep in throughout the final act, suggesting that no matter what horrors audiences are seeing on the screen, the governess’ reactions are outsized and dangerous. In that sense, Clayton and the writers leave enough enigmas to keep the story from feeling didactic. Horror, they suggest—both in Miss Giddens’ life and in her predecessor’s—is as much in the victim’s reaction as in the victimizer’s actions. But wherever the horror comes from—actual ghosts, or ghosts of the mind—it’s equally unnerving. There’s no need for ambiguity there.

A dry but thoroughly accessible 23-minute video essay from film scholar Christopher Frayling, shot in the park that serves as the film’s gothic estate, walks viewers through the film’s history, dropping in plenty of interesting trivia. He explains how it was derived from a play, how Capote got involved and what his contributions were, and information about the park where it was shot, but also gets into analyzing some of the shots and symbolism. An intriguingly nuts-and-bolts 18-minute feature on cinematographer Freddie Francis discusses the “primitive and difficult equipment” used to shoot the film, and gets into Francis’ filmography and the innovations used to shoot the film. And a 13-minute piece shot in 2006 features interviews with Francis and Innocents’ editor and script supervisor, sharing memories from the set, and about Jack Clayton’s working methods, intentions, and hobbies. (Apparently working with the pigeons on set made him a lifelong pigeon-fancier. What a takeaway from a film prominently featuring a floppy pigeon-corpse with a snapped neck.)