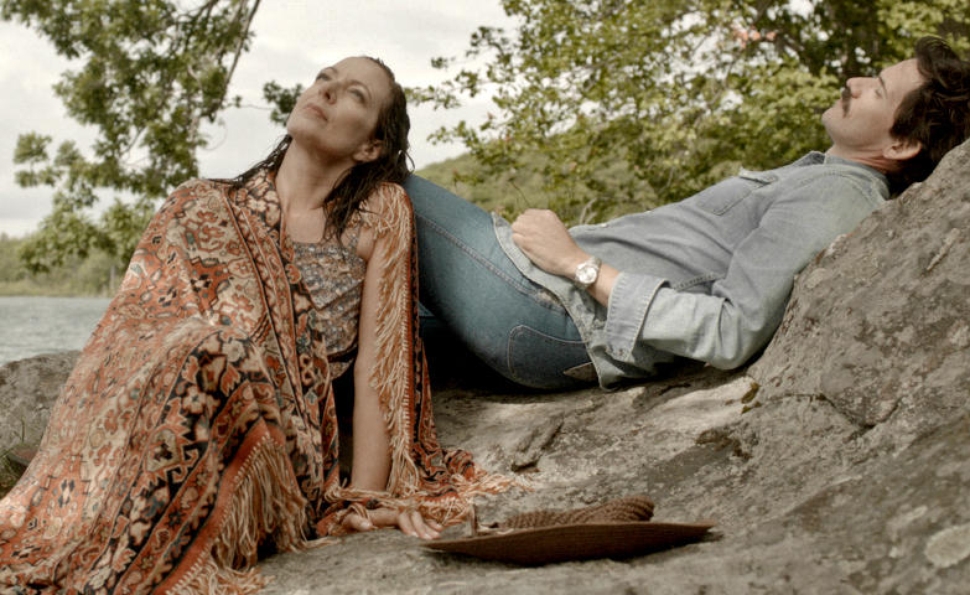 Remember when The Hurt Locker came out, and everyone was like “You know that Billy Crudup lookalike who explodes in the second act when everyone is running away from the bomb implanted in a child’s corpse? When is he going to write and direct a relatively star-studded version of ‘The Seagull’ that relocates Chekhov’s drama to the lake house of a WASP-y Connecticut family circa 1984?” Well, the wait is over. With Days And Nights, Christian Camargo—a multi-hyphenate talent whose interests are apparently more extensive than his IMDb credits suggest—has delivered his feature-length directorial debut, and it’s the movies’ most radical riff on Chekhov since Louis Malle’s Vanya On 42nd Street.

Camargo himself steps into the Trigorin role, rebirthing Chekhov’s fame-obsessed writer as a filmmaker visiting the New England home of his older actress lover, Elizabeth (a characteristically terrific Allison Janney). Lest Days And Nights be considered a vanity project, however, Camargo’s script shifts the focus away from his character in order to settle the story on Elizabeth’s tormented family, effectively reducing Chekhov’s most dynamic male character to a supporting role in his own drama. An understandable attempt to help wrangle the text into a more streamlined narrative, Camargo’s gambit is ultimately his film’s undoing, as the members of Elizabeth’s family are hazily sketched out, the connections between them as diaphanous as an early summer sunrise.

It’s Memorial Day weekend, and all Elizabeth’s relatives are gathering in the same place. Her son Eric (a brooding Ben Whishaw) is a mixed-media artist starved for his family’s attention, and deeply in love with a neighbor named Eva (Juliet Rylance, whose spacey affectations uncannily recall Virginia Madsen’s performance in Sideways). Perhaps most crucially, there’s the property’s owner, Elizabeth’s brother Herb (William Hurt), whose failing health is becoming harder to ignore. The cast is rounded out by a strange gaggle of other characters, including Jean Reno as the weirdly present family doctor, and Katie Holmes as… someone. She’s definitely someone. And filling in for the titular seagull is a bald eagle. (Camargo apparently couldn’t bring himself to call his film The Eagle, opting instead for a generic title that hints at the movie’s inability to make memorable choices.)

The weekend unfolds much as it does in Chekhov’s play—Eric stages a quietly disastrous artistic performance for his family, which triggers a chain reaction of discord, self-loathing, and unrequited love—and it’s never particularly clear what all the Big Chill vibes are supposed to contribute. Camargo dwells a bit on the emerging technology of the 1980s, but mines the period more for its style and ineffable sense of simplicity; to some extent, it feels as though the kind of “quality time” Elizabeth’s family spends together would be impossible now. Most of all, however, the film seems reverse-engineered from its gorgeous lake location, which Steve Cosens’ nuanced cinematography always shoots like it’s staring into the sunrise of an uncertain new day.

Unfortunately, the film’s sense of place is much more lucid than its sense of purpose. Camargo maintains an odd relationship with the source material, his script lost in the limbo between “inspired by” and “adapted from.” The world of Days And Nights is vintage Chekhov from the start: As soon as an old man sings to himself to ward off insanity, it’s clear whose world we’re in. But the characters occupy the same strange space that Shakespeare In Love so memorably carved out: Their actions and dialogue are both colloquial, and inextricable from the legend behind the curtain. Shakespeare In Love had the benefit of being a comedy (not to mention the benefit of a script co-written by Tom Stoppard), while Camargo has a much harder time of finding the right balance. Some lines sound like translated Chekhov (“I can’t stand the taste of blood, it’s like eating someone”), while others feel hostile toward him. (Elizabeth to her lover, regarding his lust for Eva: “If you don’t put your dick down, darling, you’ll run into something. I know you want to crawl inside that young vagina and hide from the world, but you’ll just be disappointed.”)

Eventually, the whole movie falls into the rift between those two modes. The characters are so distant from one another that it becomes difficult to understand who they are and what they want, and the ellipses fortifying the film’s mood are left to carry more weight than they can. Camargo all but ditches the creative self-reflection that courses through Chekhov’s play, and his adaptation fails to recognize that a portrait of unrequited love requires a heartbeat in order to hurt.