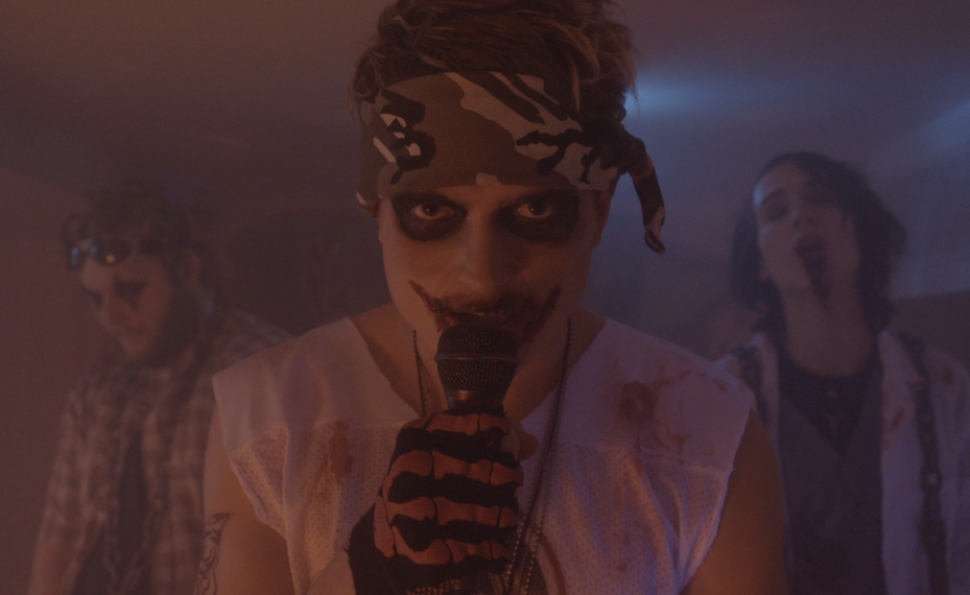 In the basement of a house in rural Delaware, a group of wasted teenagers in facepaint pass around a microphone, trading verses on a grinding rap-rock song called “I’ll Cut Yo Dick Off.” In the corner of the room, 25-year-old New York photographer Nate (played by Keith Poulson) eggs the boys on, claiming to be a fan of their “I’ll Cut Yo Dick Off” YouTube video, and saying he knows people in the city who work for magazines and record labels. Nate doesn’t seem like that bad of a guy. He’s come to Delaware on a quest for something authentic, driven out into the sticks by his disgust for pigtail-sporting Brooklyn beardos who crank out primitive art and sell themselves as tortured geniuses. Nate tells himself that these rappers—who call themselves Young Torture Killaz—are more genuine than any of his frenemies back in the city. But in the back of his mind, Nate also knows that he might be able to sell pictures of these kids as Americana.

The only people easier to mock than hipsters are pretentious New York artists, but Michael M. Bilandic’s low-budget indie satire Hellaware knowingly skewers both, even though Bilandic ultimately doesn’t find anything new to say on the subject. Nate’s story is as old as modern art. He’s the sincere go-getter who carelessly appropriates other people’s work and images for his own ends, then spews out highfalutin bullshit to defend himself. Hellaware’s big twist on an old gag is to set it within a subculture of young people who hate everybody’s ridiculous affectations but their own.

Even with that twist, Hellaware’s obviousness proves too much for Bilandic to overcome. The movie’s plot arc is dully predictable: Nate gets close to his subjects, takes some intimate pictures that they find embarrassing, uses the photos to get his first gallery show, impresses the kind of art-world snobs who coo over exhibitions of actual severed penises (not just songs about them), then starts acting like the kind of self-important asshole he and his friends used to mock. Hellaware is short enough that its doggedness never gets tedious, but the film’s near-total absence of curveballs exposes either a limited imagination, or a lack of time and money to flesh out the premise.

Even the Young Torture Killaz’s return for an expected but admittedly zingy big finish only points out how little interest Bilandic seems to have in the Delaware group, let alone how little his hero cares about them. If only a quarter of the energy that Bilandic devotes to aiming at fat targets was spent on getting to know the people Nate is exploiting, Hellaware wouldn’t feel so blunted. A scene where one of the Killaz tries on Nate’s semi-girlfriend’s glasses—and jokes, “What do you think of my new look? It’s very New York.”—suggests the more balanced picture that Hellaware could’ve been, showing how assumptions and misperceptions cut both ways.

Hellaware’s comic tone is odd, too—sometimes to its benefit, sometimes not. The movie is blessedly non-broad, such that when one of Nate’s old art-school professors talks about a gallery owner who has “a collection of Russian erotica that’s very strange and pretty interesting,” the joke isn’t underlined as a joke. This is just how people talk in Nate’s circle, referring to various kinds of irrelevant or awful ephemera as “interesting,” or “revealing.” But Bilandic’s comedic restraint also means Hellaware is low-key to a fault. When Nate’s methods become more overtly sinister—when he returns to Delaware with drugs and booze, encouraging the Young Torture Killaz to be more decadent and to make shittier music—Bilandic seems more concerned with making an overfamiliar point about artists doctoring real life to suit their needs than he does with being funny.

Ultimately, though, what justifies Hellaware’s existence—beyond some genuinely witty lines, sprinkled liberally throughout—is its spot-on depiction of Nate. As conceived by Bilandic and played by Poulson, Nate is a special kind of self-deluded, making ethical and aesthetic mistakes out of laziness and fear of conflict rather than any overt malice. Early on, Nate is half-convinced that Young Torture Killaz is a brilliant group, or at least, “There’s enthusiasm there.” But even as he’s promising to stay non-judgmental, he’s photographing the ostentatious American flags and crumbling signs in the YTK’s hometown, instinctively putting a frame around their lives. By the end of the film, when he’s telling interested art-lovers, “They’re not as dark as they think they are, and there’s something dark about that,” he’s finally putting his training to good use, finding the exact words to make juvenilia seem profound.