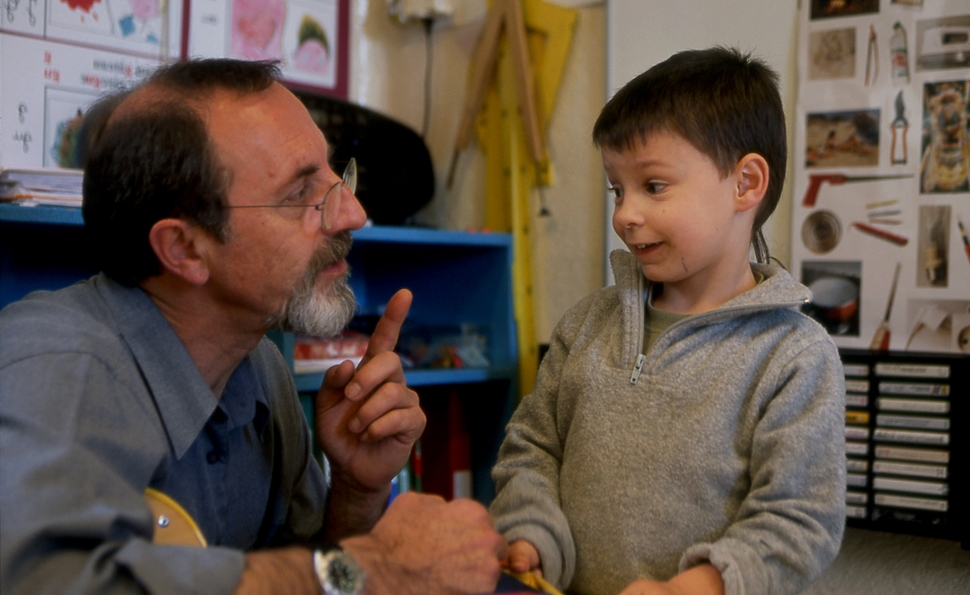 To Be And To Have

Nicolas Philibert’s 2002 documentary To Be And To Have is about a school—which isn’t immediately apparent from the first five minutes of the film, which show farmers herding cattle in a snowstorm, then two turtles crawling across the floor of an empty classroom, then tall fir trees swaying in the winter wind. To Be And To Have isn’t really as impressionistic as its first three scenes imply. It’s more a Frederick Wiseman-like observational doc, following one class of mixed ages in a rural French community only big enough for a small primary school. (It’s the equivalent of the “one-room schoolhouse” of the American pioneer days.) But the images of the cattle, the turtles, and the trees serve a function beyond just cueing the audience that To Be And To Have is going to be a quiet, slow-paced film. They establish the setting—the tiny farming village of Saint-Étienne-sur-Usson, in Puy-de-Dôme—and they get at what it’s like to try and maintain control of a roomful of children.

The man in charge in To Be And To Have is Georges Lopez, a tall, calm, goateed man finishing his 35th and final year of teaching. (He put in 20 of those years at Saint-Étienne-sur-Usson.) The movie shows how Lopez fills the day at a school with about a dozen students, ranging from toddlers to preteens. He gets one group started on coloring while he teaches the other fractions. He has them all make crêpes together, using it as a lesson in measurements and cooperation. Throughout, he’s incredibly patient, guiding his kids through tedious remedial lessons in counting and grammar that would drive a lesser man to bellow.

One of Lopez’s main jobs is adjudicating disputes, whenever the students push each other down on the playground, have trouble sharing, or are just generally mean for no reason. These long scenes of Lopez walking children through what they did wrong—whether behaviorally, or just in the crooked way they’ve written the number “7”—bring back in a rush the feeling of being a kid in trouble, face flushed with embarrassment or blind rage. But then the whole of To Be And To Have is startling for how well it captures childhood, with minimal filter. Philibert gets his camera in close on these kids, watching them whispering to each other about who their best friends are, and seeing them help each other with their schoolwork. To Be And To Have is of a piece with other classic French films about childhood, like Forbidden Games, The 400 Blows, and The Red Balloon.

It also has the unassuming, sneakily profound quality of Jean Renoir, or of Richard Linklater’s Boyhood. There seems to be nothing much to To Be And To Have—just sweet scenes of the towering Lopez and these fragile, miniature humans, playing in the countryside or spontaneously ditching their lesson plan when one of the kids asks a question that inspires Lopez to start a whole conversation. But there’s a real pang to watching Lopez tell the mischievous 4-year-old Jojo that if he doesn’t finish his coloring, he can’t go outside, or repeatedly telling Jojo to wash his face and hands until he’s actually clean. These are the little moments that make up the days, and the relationships between children and their elders.

At the end of To Be And To Have, the usually stoic Lopez has a hitch in his breathing after he says goodbye to the children, and his sudden sense of loss is something that will be familiar to any parents who look wistfully at old pictures of their kids, wondering how these little turtles have crawled as far as they have. But the beauty of To Be And To Have is that Lopez’s loss isn’t the audience’s. This movie is a portal, leading to a living museum of childhood at its most poignant.

The lone extra of note on Kino Lorber’s new DVD of To Be And To Have is a 20-minute interview with Philibert, in which he describes the long process of finding the school, and how important it was to film a class small enough that the audience could get to know nearly every child. He also talks about the ethical issues of filming the kids when they were visibly upset, and he confesses to the few scenes in the film that he either staged outright or coaxed into existence. Because the interview was shot in 2002, Philibert doesn’t address the lawsuit Lopez and several parents later filed against the film, in which they claimed he’d misled them about how widely To Be And To Have would be seen. But that’s a fascinating case, because it speaks to the magnificence of this movie. If Lopez and his kids hadn’t been so magnetic, the film wouldn’t have become popular enough to upset them.

GoWatchIt: Buy. Rent. Stream To Be And To Have