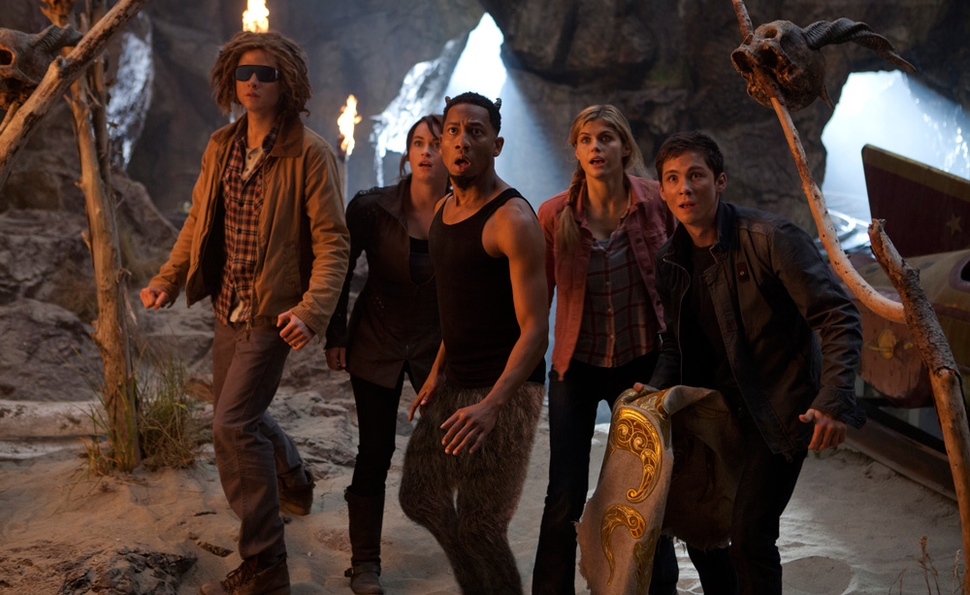 It costs the same amount of money to see a Percy Jackson movie as it did to see a Harry Potter movie, but in all other respects, the series has the bargain-bin chintziness of those budget-conscious Christmases when the holiday bonus didn’t come through. Three teen heroes with supernatural powers, led by an uncertain Nerd Of Destiny, hone their craft at a secret school called Hogwarts Camp Half-Blood, and take on all manner of mythical beasties in effects sequences that are conspicuously short of special. Based on Rick Riordan’s books, the first entry, Percy Jackson & The Olympians: The Lightning Thief, was even directed by Chris Columbus, who brought the first two Harry Potter books to the screen before that series grew more mature and cinematically expressive. Columbus’ movie was passable, just as that ever-so-slightly melancholy Christmas morning is passable. And the sequel, Percy Jackson: Sea Of Monsters continues a tradition of adequacy that could be described as “epic-ish” or “majestic-esque.”

Sea Of Monsters’ prologue flashes back to a time when the son of Poseidon, Percy (Logan Lerman), and his li’l demigod chums were dashing to Camp Half-Blood with a creature in hot pursuit. One of their friends didn’t make it, but her martyrdom, combined with some magic from above, resulted in the creation of a giant tree that acted as a border protecting the camp from the forces of evil. Cut to the present, where someone has poisoned the tree and made the peace-loving campers vulnerable once again to inexpensive-looking beasts of all stripes. In order to save the tree, Percy and his closest friends—wisecracking satyr Grover (Brandon T. Jackson) and Annabeth (Alexandra Daddario), demigod daughter of Athena—have to travel to the Sea Of Monsters and wrest the Golden Fleece away from the Cyclops guarding it. Along the way, they have to contend with Luke (Jake Abel), Hermes’ bratty demigod son, who wants to use the Golden Fleece to revive the vengeance-seeking, world-destroying demon Cronos.

The prevailing theme of Percy Jackson: Sea Of Monsters is the same as that of The Lightning Thief: In order to overcome his fears and face his destiny, Percy first has to overcome daddy issues. So does Luke, whose absent father (played by Nathan Fillion, an oasis of comic relief in a desert of witlessness) works as a functionary at a converted UPS store. But Percy’s angst, dramatized by him running his hand through the ocean and quietly pleading to Poseidon for help, is rendered almost comically petty. After all, if there’s any father in the world who’s entitled to act like a distant god, it’s an actual distant god. Given that Percy saved Olympus from oblivion the last go-around—an achievement treated with a strange “Yes, but what have you done for us lately?” attitude around Camp Half-Blood—his navel-gazing here is both unnecessary and a drag on the action.

Aside from one genuinely inspired animated sequence that tells Cronos’ story entirely through stained-glass figures and backdrops, the mythical clashes in Sea Of Monsters are serviceably rendered, neither groundbreaking nor embarrassing. Percy and company improvise their way through giant bull-like and scorpion-like creatures, navigate the belly of an underwater beast, and fight a fire demon taller than the peak of a roller coaster. Director Thor Freudenthal (Hotel For Dogs, Diary Of A Wimpy Kid) has the luxury of being mostly unburdened by origin stories and focusing on the quest, but the regularity of the action beats isn’t matched by any flourishes that might separate one from another. It’s overwhelming challenge, unlikely triumph—rinse, repeat, ad infinitum. But it does leave the door open for a thrilling second sequel: Percy Jackson: Getting The Kids Out Of The House On A Rainy Afternoon.