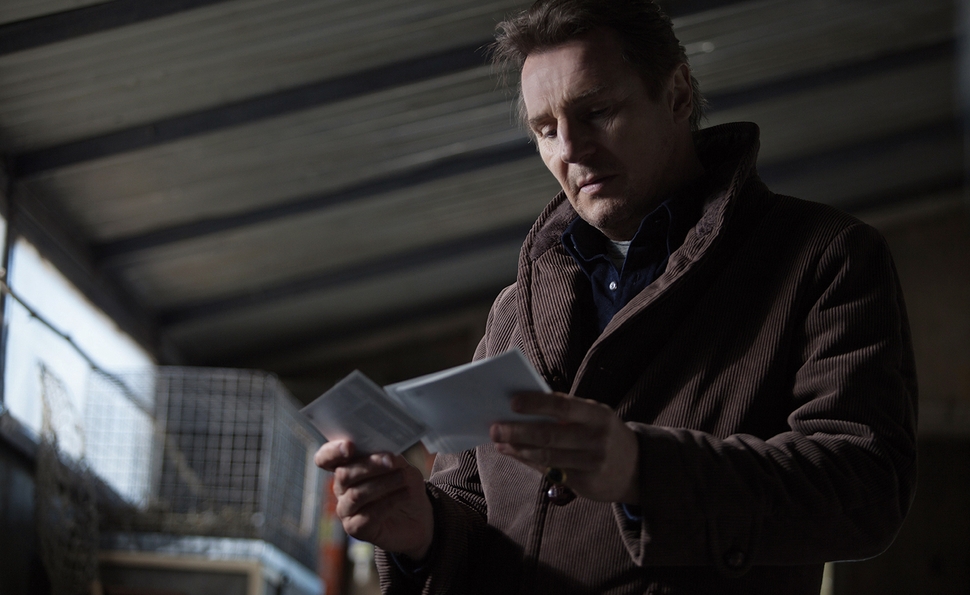 A Walk Among The Tombstones

Liam Neeson would like to have a word with the man who said there were no second acts in American lives—a manly, intimidating word, delivered in a sandpaper whisper. Maybe Neeson’s Irish heritage earned him an exemption from F. Scott’s Fitzgerald’s famous quote, but whatever the reason, Neeson is in the midst of one of the most improbable second acts in movie history. Suddenly, this 62-year-old Academy Award nominee, previously known more for his prestigious résumé than his prodigious muscles, is the biggest and most consistent ass-kicker in Hollywood. If the Liam Neeson of today starred in a movie called Schindler’s List, fans who only know him from his recent work would assume it was a high-octane thriller about a hitman named Schindler systematically working his way through an index of the men who murdered his family. Neeson’s latest effort, A Walk Among The Tombstones, is slightly more subdued than his average shoot-’em-up, but no less gruffly satisfying.

Neeson stars as Lawrence Block’s NYPD-cop-turned-unlicensed-private-eye Matthew Scudder, who, in the film’s opening scene, interrupts his morning cup of coffee (and two shots of whisky) to stop a bar robbery, killing two of the assailants and injuring the third. Eight years later, Scudder is retired from the force and earning a meager living as a detective. He’s called to the lavishly appointed home of Kenny Kristo (Downton Abbey’s Dan Stevens, also currently starring in The Guest), a drug dealer—he prefers the title “drug trafficker”—whose wife has been kidnapped and held for ransom. Before Scudder can refuse the job as his bag man, Kenny explains that he’s already handed over his life savings to the thieves—who killed his wife anyway. Scudder’s task, if he’ll take it, is to find the men who perpetrated the crime, so Kenny can have his revenge.

What follows contains no wild plot twists or elaborate genre deconstructions, just good old-fashioned sleuthing and gritty New York ambiance par excellence. To find the kidnappers, Scudder follows their trail of breadcrumbs through the Five Boroughs, while director Scott Frank and cinematographer Mihai Malaimare Jr. follow him, with an attentive eye to some of the less glamorous (and less photographed) corners of New York City: musty libraries and dingy diners, church basements and vacant lots, and for several key sequences, Brooklyn’s Green-Wood Cemetery. Even with immigrants like Neeson and Stevens anchoring the cast—with, to their credit, totally passable Noo Yawk accents—the movie is shot through with an authentic Big Apple vibe.

A Walk Among The Tombstones also has Neeson at the peak of his powers as a glowering antihero, even though the film pushes him into a decidedly more subdued register than the Taken films, where his character is portrayed as a combination of Rambo, MacGyver, and Jesus. While still cutting a convincing figure as a badass—particularly when peering over the upturned collar of a terrific corduroy overcoat—Neeson plays Scudder as a lonely recovering alcoholic, hounded by unrelenting guilt and regret. The movie’s finale, which juxtaposes a shootout with an Alcoholics Anonymous meeting, serves as an effectively mournful reminder that in the real world, the excessive gun violence of Neeson’s escapist action pictures always comes at a terrible cost.

Frank proved in his exceptional screenplays for Get Shorty and Out Of Sight that he has a knack for crime-fiction adaptations that transmit the infectious, propulsive momentum of a good page-turner to the screen. Though Block’s novel was originally written in 1992, Frank updates the setting to the turn of the century, and sprinkles the production design and dialogue with references to the looming threat of the Y2K bug; even before Scudder is called to Kenny’s house, the air is thick with dread over a looming catastrophe. Later, one kidnapper spies a newspaper headline about the computer virus affecting airplanes and remarks, “People are afraid of all the wrong things.” He’s referring to himself, but inadvertently alluding to the city’s sad future.

It’s a small, sharp moment in a movie full of small, sharp moments. Peppered with memorable tough-guy dialogue (“I wasn’t brave. I was just drunk.”) and coated with a convincing layer of grime, A Walk Among The Tombstones will probably do no better than modest business in theaters. It will certainly win no Oscars this awards season. But it’s the sort of modest yet thoroughly satisfying potboiler that, with time, begins to accrue a reputation among aficionados as a minor classic of its genre. Expect it to have a healthy second act, too, on home video and cable.

GoWatchIt: Buy. Rent. Stream A Walk Among The Tombstones