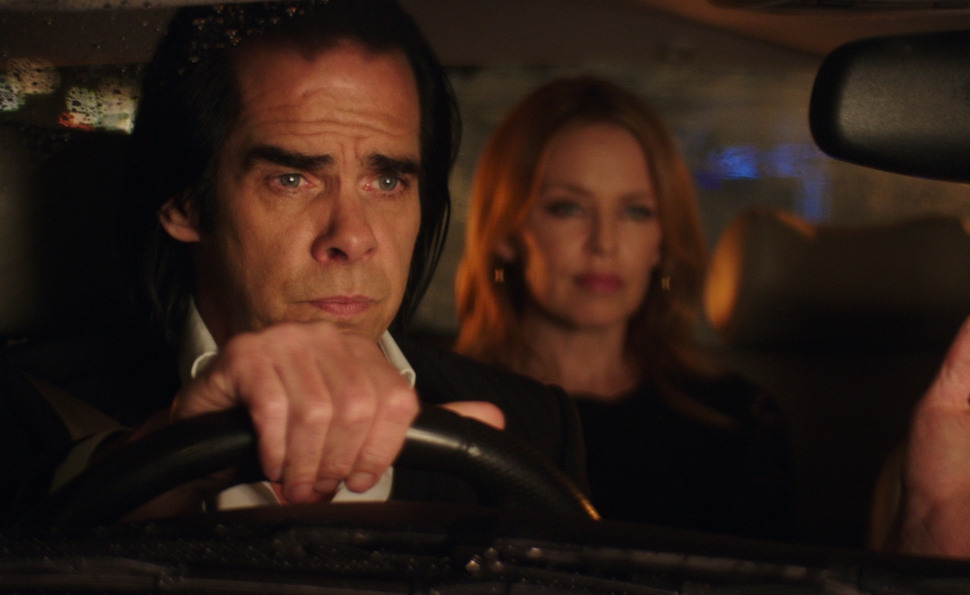 Nick Cave used to wake up, go to church, pray with all his might, go find a dealer to feed his heroin habit, then hope the combination of righteousness and sinfulness would balance out in the end. He hasn’t done that in a while, however. “At the end of the 20th century, I ceased to be a human being,” Cave says early in 20,000 Days On Earth. He describes a routine of waking, writing, watching TV, spending time with his family, and writing some more, in the latter capacity creating “an absurd, crazy, violent world where people rage away and God actually exists.” Taking its title from Cave’s age, 20,000 Days On Earth depicts the singer-songwriter-novelist-screenwriter amid a long, productive, generally happy postscript to years of tumult, enjoying a life of creation and contemplation in the English seaside town of Brighton.

That may not sound like the most compelling subject for a documentary, but co-directors Ian Forsyth and Jane Pollard have only offered a documentary in the loosest sense. This heavily aestheticized, partly dramatized slice of life follows Cave as he visits a therapist, performs songs from the most recent Nick Cave And The Bad Seeds album (2013’s Push The Sky Away), spends time with his personal archives, and drives around Brighton discussing the creative process and his own history with friends like actor Ray Winstone, former Bad Seed Blixa Bargeld, and pop singer Kylie Minogue, with whom Cave dueted on “Where The Wild Roses Grow,” the biggest hit of his career.  These conversations may exist only in Cave’s mind, though, given how his chat partners appear and disappear without warning.

For longtime Nick Cave fans, nothing here will prove all that revealing. Cave recounts his upbringing in Australia, his time in The Birthday Party and The Bad Seeds, his drug habit, and his shifting attitudes toward religion. But 20,000 Days On Earth is less about information than presentation, with Cave providing a lyrical, reflective, yet unpretentious voiceover as he goes about the work of being Nick Cave: typing, recording, collaborating, and spending time with the twin boys he’s raising with his wife Susie, the woman he credits with rescuing him from his old, destructive life.

Susie is seen, but never in full, and never heard. That’s no doubt in part because there’s no way any depiction could live up to Cave’s description of her in one of the film’s best scenes, a rapturous monologue in which he describes her as the apotheosis and usurper of all his previous ideals of woman. Meanwhile, a montage covering everyone from Wonder Woman to Barbara Eden in I Dream Of Jeannie rolls by. It’s a standout moment, but one consistent with 20,000 Days On Earth’s mission of casting Cave, who co-wrote the film, as a man of outsized passions living the humble life of a creative laborer. That’s a convenient image for promotional purposes—the film never casts him in an unflattering light, literally or figuratively—but it’s also a convincing one. Looking at old photographs, Cave seems a bit baffled by some of the habits of his 1980s self, a Byronic young man who would tear pages from books and add his own writing to them.

It’s easy to see how the mature Cave emerged from that earlier incarnation. Both are driven by visions and an almost inhuman work ethic, and both understood how to turn those visions into art. In one scene, Cave and longtime collaborator Warren Ellis recall a Nina Simone concert in which Simone made no attempt to hide her hostility for the audience, and then delivered a transformative performance far removed from whatever feelings she brought to the stage. 20,000 Days On Earth is itself an act of performance, a chance for Nick Cave to offer his own version of Nick Cave to the world. It’s a persuasive act, though, one that finds the connection between a pensive, fiftysomething creator living a quiet life by the sea, the wild-haired, death-courting rock star of yore, and the passionate stage presence still capable of sending audiences into an evangelical fervor. None of those Nick Caves could exist without each other, and while 20,000 Days On Earth never finds the real Nick Cave, it’s because it knows better than to try to look for it.