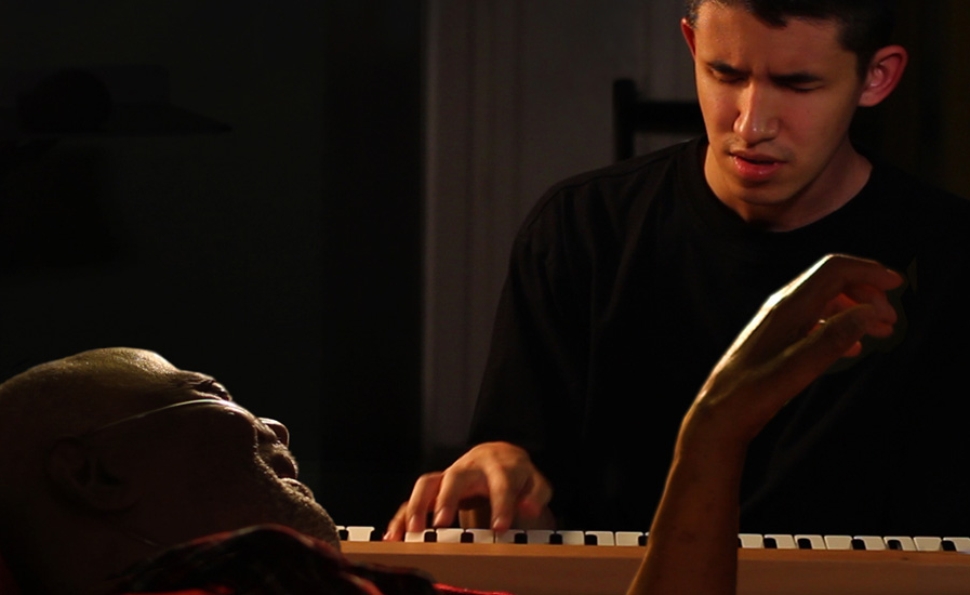 Keep On Keepin’ On

Keep On Keepin’ On is packaged like a standard-issue music documentary—albeit one with an unusually palpable affection for its subject—but Alan Hicks’ debut feature resonates as a beautiful illustration of how people can find each other. The Australian drummer turned director had enough restraint to keep himself out of the movie, but the story he tells with it nevertheless reflects his own. A musician from Wollongong, Australia, Hicks moved to New York City when he was 18, and studied jazz at William Paterson University. There, he met the man who became his mentor: legendary swing and bebop trumpeter Clark Terry, who played with the likes of Count Basie and Duke Ellington, in addition to teaching Miles Davis and Quincy Jones. Terry eventually hired Hicks to drum with his touring band, giving him a career in the process. It turns out that Terry was giving Hicks another career as well.

Hicks only realized how remarkable his meeting with Terry was—and that he’d stumbled upon a great subject for a documentary—when he saw his story repeat itself with an even more pronounced sense of purpose and kismet. While Hicks was a student at William Paterson, he met a prodigiously talented jazz pianist named Justin Kauflin, a 23-year-old who has been blind since sixth grade. Also around that time, Terry, nearly 90, began to lose his sight as a result of his worsening diabetes. Sensing an opportunity to help fate along and encourage a meaningful connection, Hicks introduced Kauflin to Terry. Keep On Keepin’ On observes the rather incredible friendship that ensued.

The film belies Hicks’ inexperience, though that may have something to do with the fact that he shot it for more than five years, which gave him plenty of time to refine his technique (and perhaps dull the untrained sensitivity that makes much of the film special). The early portions of Keep On Keepin’ On, likely cut together toward the end of production after Hicks assembled the bulk of his footage, are assembled with the unremarkable competency of someone who’s been numbed to the unique wonders of their work. Before settling into its portrayal of an unlikely bond, the film runs through the standard biographical paces, all talking heads and rough archival video. Terry’s formative years spent impoverished in Depression-era St. Louis are fascinating, but the means by which they’re presented distract from the wonders of Hicks’ cool, decidedly organic approach to the present-day parts.

Hicks’ depiction of the relationship that forms between Terry and Kauflin is modest, unforced, and casually moving in a way that makes it feel as though these two men are genuinely motivating the film around them. Hicks trusts his subjects, and he trusts how compelling it is to simply watch people from such wildly different backgrounds find common ground and inspire each other. It may sound a bit saccharine, but the easy rapport Terry and Kauflin share almost instantly defuses the kind of eye-rolling that such a dynamic often inspires. Kauflin is obviously overjoyed to have made this connection, but he never seems opportunistic, and the way Terry’s verbal patterns seep into the younger man’s speech and swagger point toward the kid’s palpable awe; one of the film’s great pleasures is watching Kauflin’s hero worship melt into a genuine sense of friendship.

As for Terry, no filmmaker would have to game the truth to make him seem like an inspiration. An infectiously positive man who continues to make music from his hotel bed, Terry obviously sees something of himself in his young protégé, which is all he needs to see to get by. Even in his failing health, he does whatever he can to help Kauflin, efforts that include prepping him for the Thelonious Monk International Jazz Competition (which does not play out as expected) and introducing him to an old friend in a powerful position. Even with such spine-tingling moments, Hicks never aspires to the raucous emotional highs of 20 Feet From Stardom, or films of that ilk. Instead, Keep On Keepin’ On opts for a feeling of loose bebop jazz, keeping things fresh, unpredictable, and occasionally sublime.