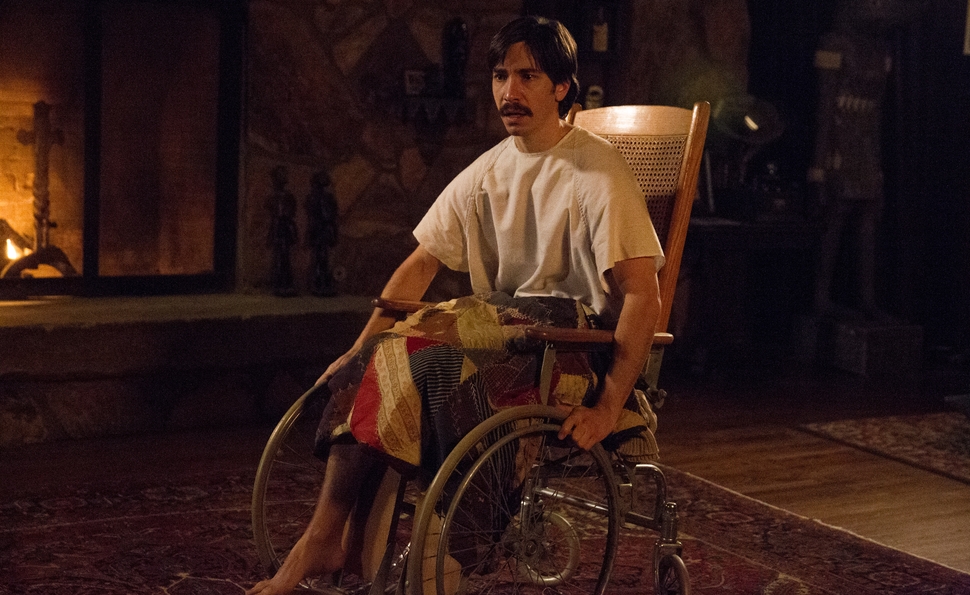 Just before Kevin Smith’s horror-comedy Tusk fades in, laughter erupts—not from the audience, but from the screen. Tusk stars Justin Long as Wallace, a podcaster who travels around the country meeting weird people, then describes his experiences to his co-host Teddy (Haley Joel Osment), who refuses to leave Los Angeles. (Their show is called The Not-See Party, because Teddy doesn’t see what Wallace sees.) While Wallace tells his stories, Teddy laughs his head off. When Teddy makes a smart-ass comment, Wallace cackles in response. From the few minutes of “The Not-See Party” shown in Tusk, viewers get the idea that Wallace and Teddy’s podcast is one-third talking, two-thirds laughing. And there are times in Tusk when it seems like Smith means to turn the movie into a pointed, self-skewering comment on what happens to those who treat the world as an endless joke.

In the opening credits, Tusk is described as “based on actual events”—which is true, inasmuch as it’s based on an episode of Smith’s podcast, where Smith and his friend Scott Mosier had fun with an online ad soliciting a boarder willing to dress up as a walrus for two hours each day in exchange for a free room. In Tusk, Wallace fields a similar pitch when he flies up to Manitoba to interview the star of a humiliating viral video, only to find out that his subject is dead. Wallace goes looking for any eccentric in the vicinity, which is how he comes across a flyer written by a man named Howard Howe (played by Michael Parks), offering lodging to anyone willing to listen to his tales of maritime adventure. Wallace drives up to see Howe, who serves him spiced tea while spinning a yarn about being lost at sea as a young man and being nurtured by a friendly walrus he named “Mr. Tusk.” The next thing Wallace knows, he’s been drugged unconscious. He wakes up to find Howe has begun amputating his limbs in order to stitch him into a grotesque walrus suit, with Wallace’s own sharpened femurs serving as tusks (and his own ridiculous hipster mustache serving as whiskers).

Tusk has a lot going for it. Michael Parks has a knack for making Smith’s overwritten speeches sound like prose-poems, and Smith doesn’t squander that asset—he lets Howe’s long, winding stories anchor the movie. And that Mr. Tusk costume is genuinely horrific, with bloody scars and a general ungainliness that makes the Wallace-walrus look like he’s in excruciating discomfort. (There’s a scene about three-quarters of the way through Tusk where Howe forces the man-beast to learn how to swim, and the combination of Wallace’s panic and what he finds beneath the water is as terrifying as anything a veteran horror director could’ve staged.) Tusk also has some subtle touches that speak to Smith’s personality, like the way Wallace keeps making discoveries while urinating, and how Wallace’s enormous plastic “Chug-eh-lug” cup from the Canadian convenience store “Eh-2-Zed” pops up in nearly every shot in the Howe house, representing how out of place the snarky goofball Wallace is in the world of this grizzled maniac.

That said, the names “Chug-eh-lug” and “Eh-2-Zed” are emblematic of Smith’s own Wallace-like tendency to go for the cheap joke whenever possible. Tusk is the first in a planned “True North Trilogy” from Smith, and it’s packed with weak wordplay, with a Canadian spin. (For example, at one point a character talks about eating at “Poutinee-Weenie.”) The movie’s grossest misstep is the performance of Johnny Depp as Guy Lapointe, a former Quebec cop who’s been hunting Howe for years, and who helps Teddy and Wallace’s girlfriend Ally (Genesis Rodriguez) track him down. Between his wig, his makeup, and his outrageous French-Canadian accent, Depp comes across like the early-1960s Jerry Lewis, transplanted into a horror movie to provide comic relief just when it’s starting to become genuinely disturbing. Tusk never recovers from his arrival.

It doesn’t help that the film doesn’t have much of a plot—just Wallace going to see Howe and getting walrus-ized—and no strong visual design, apart from the walrus suit. Even for a fairly low-budget movie, Tusk doesn’t feel thought-through, or focused enough. For a time, it seems like it’s going to be about two kinds of storytellers—the obnoxious Wallace and the gentlemanly Howe—and how they each exploit people to their own sick ends. But ultimately, any point gets drowned out by all the self-satisfied laughter. Smith’s writerly screenplay, with every guffaw scripted, misses the looseness of contemporary comedies; while Smith sometimes illustrates the stories Wallace and Howe tell, at other times he just lets them ramble. Early on, Howe shows Wallace a bottle he got from Ernest Hemingway, and tells an anecdote about it, explaining afterward that it’s the story that makes the bottle special, and vice-versa. In Tusk, Smith rarely has the bottle and the story on the screen at the same time.