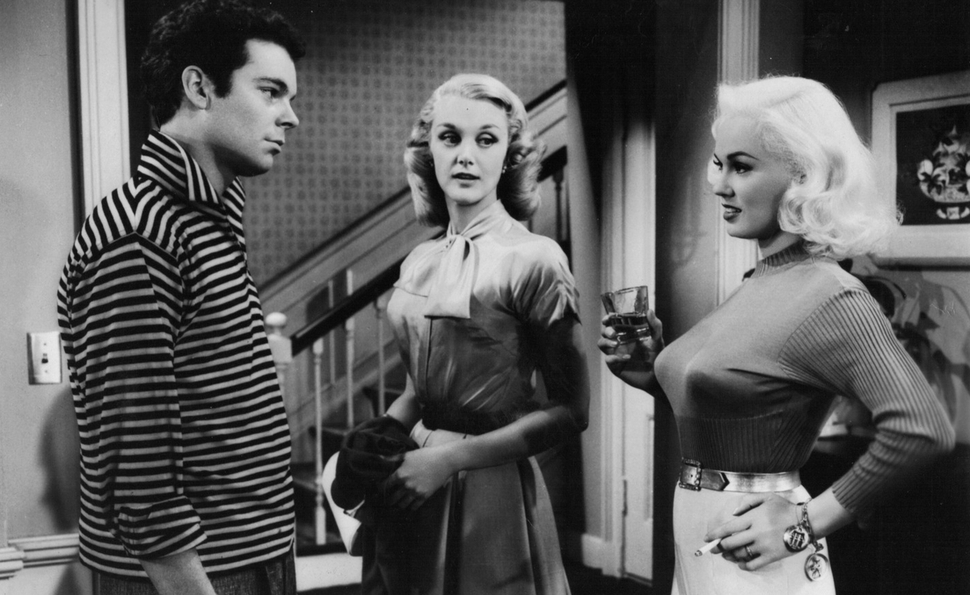 The 1958 exploitation movie High School Confidential sets the bar for camp awesomeness awfully high with an opening sequence featuring Jerry Lee Lewis, in the prime of his wild life, beating out the title song on a piano on a big truck sturdy enough to hold Lewis and his band. But the film maintains that level of agreeable ridiculousness until a final scene where a hitherto-absent narrator says the preposterous events that have just unfolded are a fact-based representation of the dangers of marijuana and the menace it poses to proper society—especially the children. This closing narration seems to belong to another movie. At the very least, it’s an amusingly disingenuous attempt to present a sleazy B-movie with nothing but cheap kicks on its mind as a sober-minded exposé of the problems plaguing contemporary youth. The notion that High School Confidential is a serious film in any way might be its wackiest, wildest joke.

Russ Tamblyn, fresh off his Oscar-nominated turn in 1957’s Peyton Place, stars as Tony Baker, a suspiciously mature senior who’s been attending various high schools for seven solid years. Tony arrives at his latest school full of insouciant attitude, borderline-unintelligible hipster jive, little tolerance for squares, and an evangelical passion for the gospel of marijuana cigarettes. Baker’s love for the demon weed brings him into a circle of teenage dope-peddlers and reefer enthusiasts, plus classmate Joan Staples (Diane Jergens), who maintains her wholesome, freshly scrubbed air of Doris Day-like innocence no matter how far she falls into the pit of addiction.

High School Confidential takes place in one of those strangely ubiquitous movie high schools where the students seem to be roughly the same age as the teachers, and even the dope-peddlers agree that heroin addiction follows that first hit of reefer as surely as night follows day. Heck, it’s almost part of their sales spiel: “Smoke this marijuana cigarette! It’ll have you hooked on heroin in no time!” In High School Confidential, access to weed has instant drug addicts fiending for junk before they’re even done with their first joint.

Tony resides with his “aunt” Gwen (Mamie Van Doren), who oozes trashy sexuality: At one point, she cradles and nibbles on an apple with a sensuality that would make God blush. She’s a seething sexpot who settles on Tony as a convenient outlet for her erotic energies, a femme fatale perpetually lounging about the house in lingerie and a come-hither stare. Van Doren rightly has a reputation as a poor substitution for Jayne Mansfield, who in turn was considered the poor man’s Marilyn Monroe, but Van Doren is electric here, a real star rather than an acceptable simulacrum for the real thing.

The cast is half the fun in High School Confidential. In addition to Lewis and Van Doren, the cast includes Michael Landon as one of Tony’s classmates, Drew Barrymore’s father John Drew Barrymore as a drug-dealing high-school beatnik who favors his classmates with a poetry-slam ramble about Chris Columbus as the ultimate hep cat (the monologue was later sampled on a White Zombie album), and Jackie Coogan Jr. as “Mr. A”, a middle-aged, suit-clad, quietly sinister, and deceptively respectable-looking heroin kingpin who does his dirty business out of an office fit for a bank middle-manager.

Every element of High School Confidential’s treatment of marijuana rings either hilariously false or hyperbolic. It’s a B-movie that shamelessly embraces every cliche and stereotype about stoners of the era, from their love of poetry recitations by foxy, turned-on dames in shadowy coffee houses to their use of slang that sounds ridiculous coming from the 30-year-olds pretending to be high-school students, and even more preposterous from the 30-year-olds pretending to be authority figures. What makes High School Confidential a spectacularly unconvincing anti-marijuana manifesto also makes it a consistently amusing, eminently re-watchable camp comedy.