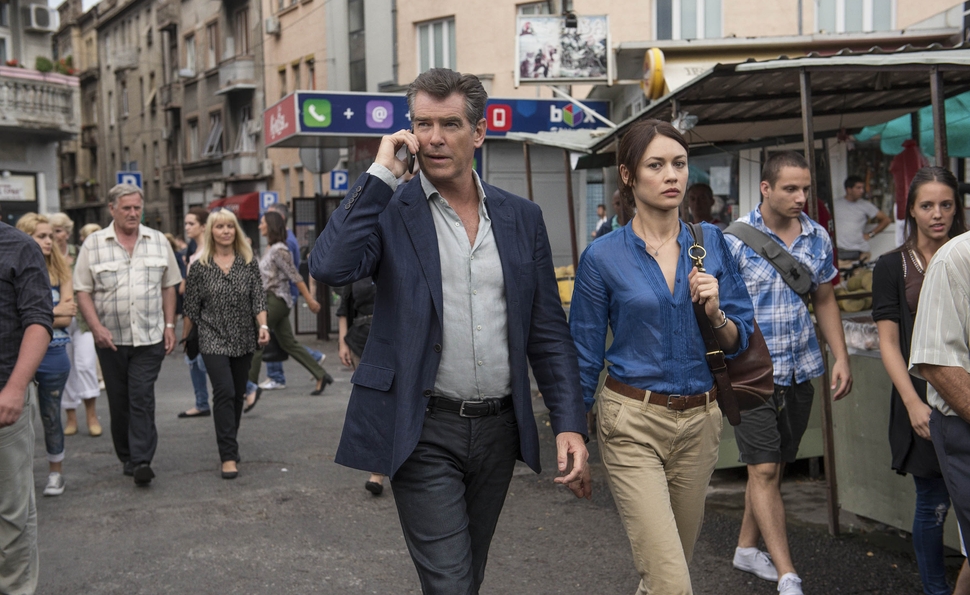 When Pierce Brosnan was cast as James Bond for 1995’s GoldenEye, the promotion had less to do with his résumé than the fact that he was poured into that particular mold—handsome and suave, nice accent, looks good in a suit, and credible with a gun. He had logged time on TV’s Remington Steele, but longtime Bond-film producer Albert R. Broccoli eyed him as a replacement for Roger Moore long before that, with little regard for Brosnan’s undistinguished record as a cheesy, second-rate Bond in the meantime. Over four entries in the franchise, Brosnan restored 007 to dignity and international success, though not great critical acclaim. But his post-Bond career has revealed him as a more compelling actor than he initially seemed. His willingness to play against his Bond image—as a long-in-the-tooth assassin in The Matador, as a Tony Blair-like former prime minister in The Ghost Writer, and even as a smitten (albeit frog-voiced) suitor in Mamma Mia!—has deepened his range as an actor, and put some distance between him and his most famous role.

The November Man represents a step back for Brosnan, way back to the late 1980s and early 1990s, when he was still logging time in generic made-for-TV thrillers. In fact, director Roger Donaldson could have made this movie back then, too, having established his Hollywood bonafides with No Way Out in 1987, which happens to be the same year Bill Granger published There Are No Spies, the novel on which The November Man is based. Aside from references to Chechnya, little effort has been made to update the Cold War spy games of 25 years ago to the Russian chicanery on display here, and real global politics are off the table. Though it pulses with the violence and vague international intrigue of the Bourne series—there are shootouts, chase scenes, double crosses, and twists—there’s no purpose behind any of this. It’s just rug-pulling for its own sake.

In the absence of meaningful context, a little coherence might have helped, but Donaldson, working from a script by Michael Finch and Karl Gajdusek, dives right into the action, and never fully sorts everything out. Brosnan plays Peter Devereaux, a retired CIA officer summoned for One Last Job: to retrieve an American spy in Moscow who has collected damning information on Arkady Federov (Lazar Ristovski), a ruthless monster destined to become the next Russian president. When that mission goes south, Devereaux shifts his focus toward protecting Alice Fournier (Olga Kurylenko), a relief-agency worker in Serbia who’s in contact with a young refugee who can testify to Federov’s heinous crimes. Meanwhile, Federov’s allies want to hunt down Alice and the refugee—sending one of the most nimble and conspicuous assassins in movie history to do it—and Devereaux squares off against a former protégé, David Mason (Luke Bracey), who’s working with another agency to track him down.

The above is a streamlined version of a plot that spins needlessly into John Le Carré curlicues, but without Le Carré’s droll, foreboding sense of the dangers and longueurs of life as an espionage agent. Apart from the scene where Devereaux is coaxed out of retirement, The November Man doesn’t pause for a moment’s breath, which tightens up the action at the expense of clarity, character development, wit, politics, themes, subtext, and all the other things that can go into a thriller besides bang-bang and crash-crash. Brosnan has proven himself capable of adding that little something extra, but he isn’t given the opportunity. He’s reduced to being a 60-year-old man auditioning for Bond again.