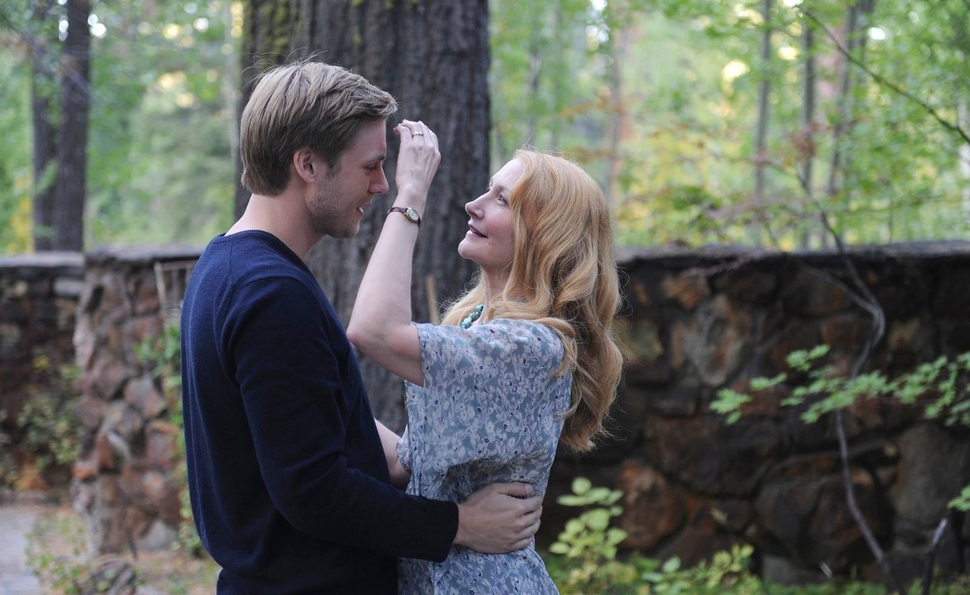 The best part of Last Weekend, co-directed by Tom Williams and Tom Dolby (who also scripted), is its immersion into the culture of Lake Tahoe. (Dolby vacationed there with his family as a child, so he knows the territory.) Last Weekend introduces a particularly specific locale, a community of people who have been summering there for generations. Everyone knows everyone else’s business. Cinematographer Paula Huidobro films the lake with sensitivity to its different moods and colors—the quiet of dawn, the blazing blue of midday. Patricia Clarkson, as Celia Green, the matriarch of a dysfunctional family gathering for one last weekend in their vacation home, stands on the shore staring out at the lake, her figure a stark black silhouette against the soft sunset hues. These moments of quiet bring melancholy, a contemplative private space missing in the rest of the film, which is overrun with constant pointless bickering.

In Last Weekend, the wealthy Green family gathers over Labor Day, coming from all around the country for a long weekend. It’s been years since they all were in the same place at the same time. Theo (Zachary Booth) flies in from New York with his new boyfriend (Devon Graye) and his friend Blake Curtis (Jayma Mays), star of the sitcom Theo helps write. Theo’s brother Roger (Joseph Cross) arrives with his girlfriend Vanessa (Alexia Rasmussen). Greeted by their parents Celia and Malcolm (Chris Mulkey), Theo and Roger revert to childhood, scrapping with each other, and picking on their mother.

The Lake Tahoe home—the same house memorably used as Elizabeth Taylor’s parents’ house in A Place In The Sun—is one of two vacation homes owned by the family (they made their money in exercise equipment), and now Celia is considering selling. Her sons never visit. They show no interest in owning the home themselves. Celia wants to simplify and let go. Watching a rich woman agonize over whether to sell her second vacation home makes for a disheartening film, especially without any sense of satire, or at least a comic acknowledgment of their fortunate position. It’s not that wealthy people can’t have interesting problems. It’s that the characters in Last Weekend lack self-awareness. The two adult sons come off as tiresome and entitled, so what should be an existential crisis feels like petulant ingratitude.

Roger has been fired for a typo that cost his firm $30 million, and he’s afraid to tell his parents. He hijacks the newspaper before it reaches the house so he can remove the business section, filled with reports of his error.  Theo wonders why his mother doesn’t seem more interested in his boyfriend, even though he’s barely interested in his new boyfriend himself. Celia, in Patricia Clarkson’s hands, is a charming and easily distracted control freak, blurting out monologues filled with carelessly rude side-swipes. Her sons use her as an emotional punching bag, as various guests sit around looking uncomfortable.

Dolby is a successful novelist, but his script for Last Weekend is loaded with exposition, with almost every line including character information and backstory. It sounds awkward; people don’t talk like this, filling one another in on common knowledge among the group. (One character tells her boyfriend, “Ever since I became friends with Theo in high school…”) Last Weekend has no subtext. It’s all text.

“Do you ever think it’s not gonna get any better than this?” Theo asks his boyfriend. Spoken halfway through Last Weekend, as the two men loll on the private family dock, the line is emblematic of the problems with the script, the characters, and the film as a whole. Theo has a good job in a field that he loves, he has a loft in Manhattan, and as his boyfriend observes, he “doesn’t even own a Metrocard.” Yes, his mother is sometimes rude and forgetful, but it’s unclear what Theo could possibly be complaining about.

Individual moments shine, however. Vanessa and Celia have a strained relationship; when Celia makes a point of approving something Vanessa has done, the relief on Vanessa’s face is cathartic and sweet. Celia breaks down in tears in the master bedroom, and her husband, used to his wife’s emotionalism, holds and comforts her. Judith Light has a cameo as a nosy, bossy nouveau riche neighbor, and she strolls into the film in her tight white pants and perfectly coiffed hair, and nearly walks away with the whole thing. Mary Kay Place and Sheila Kelley play neighbors who snorkel over to visit, clambering up the shoreline, goggles on, calling out greetings. These are details that feel right, that feel lived-in and true.

There’s a scene where Celia and Theo stroll through a farmers’ market, Theo giving his mother a hard time throughout for no apparent reason. It’s fascinating to watch Clarkson play the scene with Booth, who suggests his character mainly through rolling his eyes. Clarkson manages to bring forth the core of a woman baffled at how her life has turned out, confused and hurt as to why her sons are so angry with her all the time. Clarkson has great emotional authority onscreen, but even she can’t save Last Weekend. It’s beautifully filmed, with a great feel for location and atmosphere, but it feels petty. The vacation home is huge, but the emotions are exceedingly small.