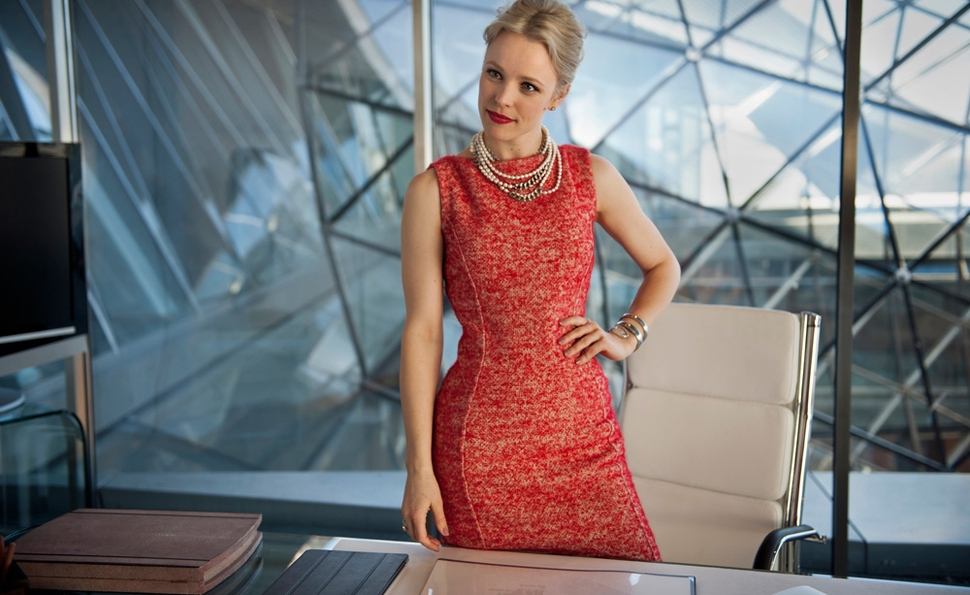 Brian De Palma’s Love Crime remake Passion adds a few wrinkles to the business-world and gender-role themes of its source material, but De Palma doesn’t succeed in making the boardroom scenes feel any realer than Corneau and his co-screenwriter Natalie Carter did. Noomi Rapace and Rachel McAdams take over as the two schemers, with Rapace playing Isabelle, a smart, rising marketing executive at an international firm, and McAdams playing Isabelle’s mentor Christine, who steals all Isabelle’s best ideas, then waves off the betrayal as “teamwork.” As a small act of revenge, Isabelle embarks on an affair with Christine’s weaselly, embezzling boyfriend Dirk (Paul Anderson), but Christine has such a fluid approach to relationships—including her sometimes-flirty relationship with Isabelle—that she doesn’t seem to care.

And frankly, neither does De Palma. He dutifully puts all the Love Crime pieces in play, because the intricate plotting of the film’s second half wouldn’t work if he didn’t, but for the first half-hour or so, Passion feels lackadaisical, with Rapace and McAdams coming off as awfully stiff. Then, right around the time Isabelle makes a bolder play for recognition—and is countered by an even more ruthless move from Christine—De Palma wakes up. After a hilariously over-the-top music cue by composer (and frequent De Palma collaborator) Pino Donaggio, the movie’s pace quickens and its style becomes more expressionistic, with longer shadows and more extreme angles. Before Passion ends, De Palma comes through with two sequences (neither of which originated with Love Crime) that can stand among his best: one where Christine is stalked on half a split-screen while the other half shows a fourth-wall-breaking performance of The Afternoon Of A Faun, and another that wordlessly sends four characters in pursuit of each other inside and outside Isabelle’s apartment.

That latter scene—Passion’s big finish—doesn’t make much literal sense, given what precedes it. The ending is a complete De Palma invention, serving as a loosely related epilogue to the main story, much like the codas De Palma added to his films Carrie and Dressed To Kill. The scene is also a complete hoot. Passion makes glancing comments about ethics, cronyism, and a corporate culture that encourages employees to be cutthroat so long as it helps the company, but as always with De Palma, he’s more riffing on these ideas than making coherent, illuminating statements. He’s primarily interested in choreographing masterful setpieces, where every camera move is precise and the tone is heightened to the point of being tongue-in-cheek.

Which isn’t to say that Passion is empty. De Palma gets some comic mileage out of the differences between the extroverted, brightly attired Christine and the chillier Isabelle—who can’t even work up a convincing “I love you” when she has to—which is a sly way of confounding the convention of the femme fatale. (Depending on the viewer’s perspective, the villain of Passion could be Christine, Isabelle, or even Isabelle’s sycophantic assistant Dani, played by Karoline Herfurth.) De Palma also deals with the difficulty of maintaining a sterling public identity in an age when cameras are recording every major and minor slip-up, something he tried to grapple with in his 2007 Iraq War collage Redacted, but was foiled by half-realized formal experimentation and mediocre acting. With Passion, De Palma is on more familiar ground, using the world of the erotic thriller to note how Skyping, sexting, and tiny pocket cameras are changing behavior, putting everyone in the spotlight and distracting the eye.

That’s ultimately what makes Passion a more effective film than the one it’s remaking. While Corneau and Carter were telling a story about what their characters do and don’t see, De Palma is more engaged with what the audience sees. There’s always something to look at in the background of Passion, from the erotic paintings on the walls of Christine’s flat to the video billboards posted around Berlin, and always something eye-catching in what the characters wear, or how they’re posed. The movie is one long game of misdirection, playing tricks on viewers from scene to scene, and showing how easy it is to steer a crowd into missing something important. That’s the real De Palma touch, even more than the operatic overtones and excess.