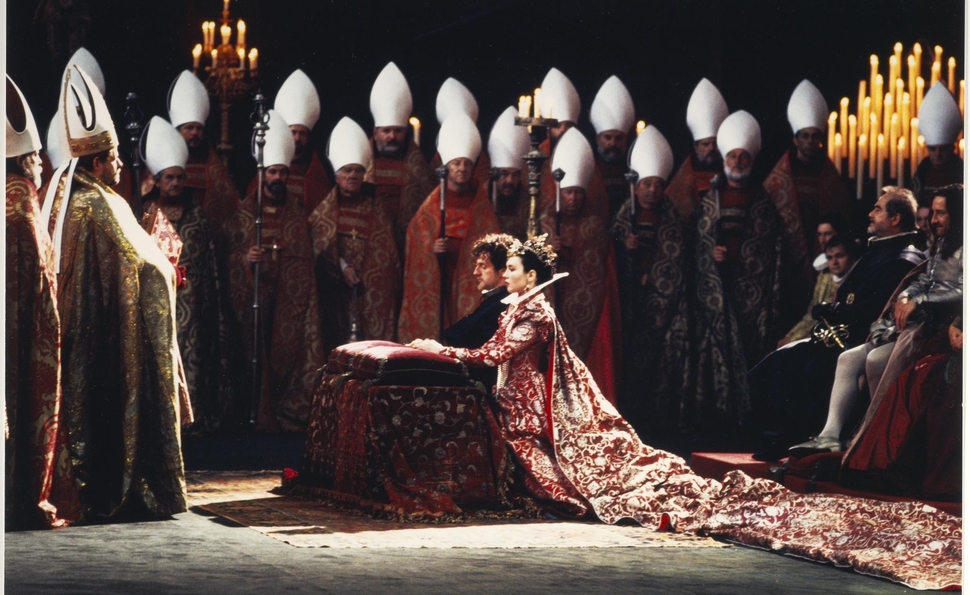 When Queen Margot was released theatrically in America in 1994, arthouse mavens had reason to believe this epic tale of love and betrayal among Catholics and Protestant Huguenots in 1572 France would take the form of other classed-up French bodice-rippers. In fact, Miramax, which distributed the film, wanted potential viewers to have that impression: It slashed about 15 minutes from Patrice Chéreau’s final cut and added a deleted scene of two lovers sharing a red cloak, which also provided an image for the poster. Contrast that with the French poster, which has Isabelle Adjani in a white dress soaked with blood, her hands cupped to her face in abject horror. This the real Queen Margot, a film that renders the events surrounding the St. Bartholomew’s Day Massacre as an appropriately gruesome and shocking series of drawing-room conspiracies and vicious retribution, all photographed at close range. The stormy romance Miramax promised in the marketing does exist, but in a far uglier context than viewers might have expected.

Recently restored to a 159-minute director’s cut, Queen Margot adapts Alexandre Dumas’ novel about Margaret Of Valois, the stylish, beautiful daughter of King Henry II and Catherine de Medici, who was thrust in the middle of a volatile time in the nation’s history. The only real pageantry in the film comes at the beginning, when Margot (Isabelle Adjani), a Catholic royal, enters into an arranged marriage with the Huguenot King Henri of Navarre (Daniel Auteuil), a gesture intended to sustain a truce in the war of religions. But even that scene rings with violence: The strong-willed Margot doesn’t want to marry the greasy, officious Henry, and refuses to offer an affirmative “Oui” after the prompt of her wedding vows. Her brother, King Charles IX (Jean-Hugues Anglade), has to leap onto the scene and shove her head forward to get the necessary consent. If it wasn’t obvious before, the empty symbolism of Margot and Henry’s union has become public spectacle, and there’s agreement between the two afterward that a wedding-night bedroom visit is out of the question.

Yet Margot and Henry both prove more shrewd, complicated, and morally keen than might be assumed, and there’s a degree to which they take their vows seriously. They aren’t romantically aligned, but they buck against the roles they’ve been assigned, especially once the weak, venal King Charles and the scheming Catherine decide to quell an anticipated Protestant rebellion by slaughtering thousands on the streets of Paris. As it happens, Margot is building bridges with another Protestant on the side, taking the dashing soldier and nobleman La Môle (Vincent Perez) for a lover and giving him refuge when he’s wounded in the massacre. Their illicit affair happens in the context of political maneuverings, including Catherine’s attempt to exalt her favored son Anjou (Pascal Greggory) to the throne and renewed threats to the monarchy.

That’s a lot of plot—and plotting—to sort out, and while Chéreau and co-writer Danièle Thompson occasionally fail to explicate it clearly, the center of the film holds strong. Adjani plays Margot as a figure of prismatic emotional and moral complexity, at times aggressive and seemingly reckless in pursuing her romantic and sexual interests, and at others cunning and shrewd in playing the middle of two sides locked in conflict. But what’s most striking about Margot is her moral integrity, which surfaces first in her rage over the massacre her family has orchestrated, and later, more subtly, in her dealings with Henry and La Môle, both of whom she goes to great lengths to protect. The degree to which Queen Margot could be called a traditional bodice-ripper owes entirely to the beauty and passion Adjani brings to the role, playing a woman who’s lusty and impudent, and determined to remove the impossible obstacles to her happiness.

Adjani’s uninhibited performance figures into Chereau’s approach to history, which couldn’t be further from the decorous reserve and pageantry of other such costume epics. This is the type of doomed romance where Margot’s lover requests that she claim his head after his execution, so she might plant it with kisses. The conflict between the Catholics and the Protestants is taken down to street level, where rivals tussle in volatile scrums that can sweep up even the most powerful figures on both sides. Chereau has concluded that an atrocity like the St. Bartholomew’s Day Massacre could only arise from an environment toxic and treacherous enough to make it possible, and he creates the film’s bruising aesthetic accordingly. The forces of history clash through filth, blood, and poison, and Margot, as elegant and transcendent a figure as she is, has dirt under her fingernails like everyone else.

Save for the theatrical trailer, the sole extra is a new commentary track by Richard Peña, director emeritus of the New York Film Festival. Peña praises the film’s ability to make sense of this fractious moment in French history while embracing an intimate, up close and personal approach. In its updating of a tried-and-true genre, the historical film, Peña likens it to The Godfather.