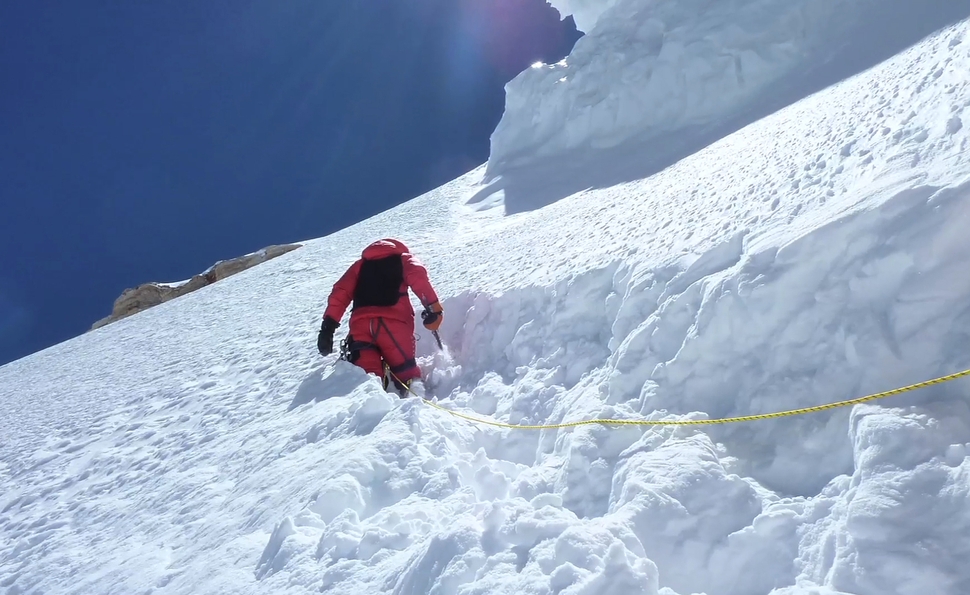 K2: Siren Of The Himalayas

None of the interviewed talking heads in the pre-charted documentary K2: Siren Of The Himalayas falls back on “because it’s there” as a reason for mountain-climbing, but just about every other cliché is in attendance. In this 75-minute straight shot of Discovery Channel cinema, no emotional crests are peaked, but viewers will come away informed. “Oh, so that’s how they do it? Never knew that…” is about all this record of a 2009 attempt to reach the summit of the titular Himalayan mountain has to offer. While the education is considerable, the fact that the footage has been lingering for five years is a fairly good indicator of the urgency of the final product.

K2 isn’t the world’s highest spot. That would be Mount Everest, by a considerable margin. But K2 is a far more difficult climb: steeper, rockier, and with worse weather. It has a 25 percent death-vs.-summit ratio, so those who take a crack at it have to be pretty dedicated to alpinism (a nifty term used a lot in this movie that can apparently be used outside of the Alps, too). Even getting to the first base camp is a hassle that starts in Islamabad, and among the north-going cliffside roads.

During this part of the trek, K2 has the wide-open goal posts to get audiences familiar with the characters making the attempt. But strangely, few moments offer glimpses into the climbers being profiled. Other than one Austrian woman whose defining feature is that she is a woman, it would be difficult to pick any of these dudes out of a lineup after watching this movie. No doubt they’re all wonderful people, but director Dave Ohlson does a poor job of getting anything human about them onscreen.

Where he does succeed, however, is in explaining, in crystal-clear terms, how people actually go about climbing K2. For example, to acclimate to the high altitude, climbers don’t just zoom up the side and make stops along the way. They go up a bit, park, go back down, camp, go back up again, and yo-yo back and forth for days. And while “camp” may sound cozy, this frequently means dangling in a nylon tent over a ledge in the wind and snow. Ohlson also offers animated looks at the different routes other adventurers have used. It’s all very thorough.

The 2009 attempt Ohlson documents—without discussing how it was financed, or by whom—is meant to coincide with the 1909 ascent by the Duke Of Abruzzi, one of the earliest success stories. Images from that expedition and voiceover from journals are woven into the new footage. Despite the century between them, many of the same obstacles hamper both groups. These historical interludes are just about the only creative aspect in this film. Not everything involving man vs. nature needs to be Werner Herzog or Harvard’s Sensory Ethnography Lab, but filmmakers up there on K2 might take advantage of the chance to create something cinematic.

Still, it’s undeniably impressive to see these people huffing and puffing just to be able to say they made it a little higher than the other guy. A significant percentage of the climbers turn back during the final leg. Then there’s the debate about whether using oxygen tanks deserves an asterisk. Along the route, there’s a memorial to all who have died trying to make the climb, many of them known to the group in this film. These scenes drive home just how peculiarly driven—or maybe delusional—they must be to try to reach the summit. It would have been nice if Ohlson provided a window into their madness.