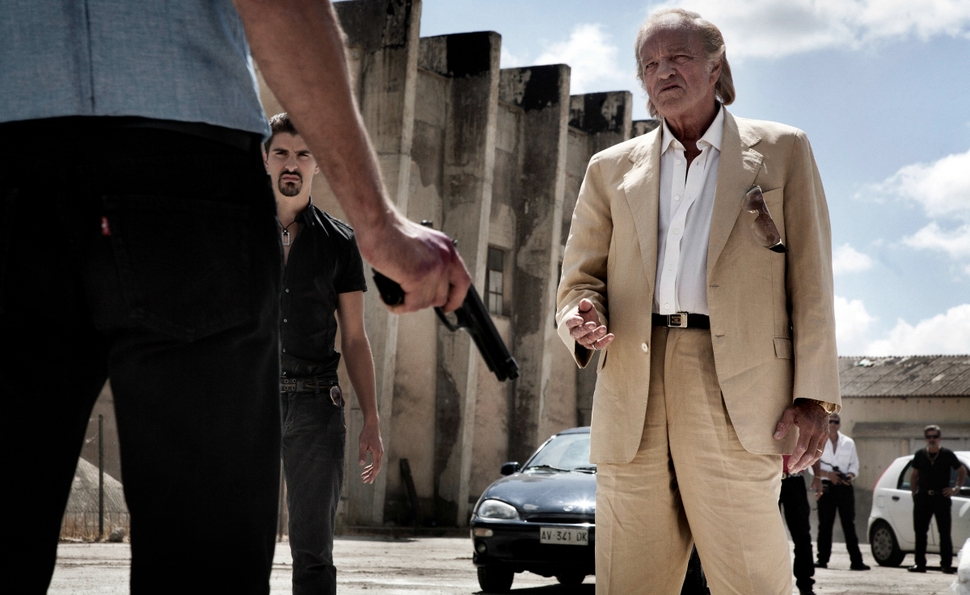 The opening images of Salvo, a brooding Italian drama about a sensitive Mafia hitman, are so visually indistinct that it looks as if something must have gone awry. Only a bit later does the import of this odd strategy come into focus. After surviving an attempt on his life, mob enforcer Salvo (Palestinian actor Saleh Bakri, from The Band’s Visit and The Time That Remains) stealthily enters the house of the dude who set him up, seeking revenge. He finds only his quarry’s sister, Rita (Sara Serraiocco), sitting alone counting money. She doesn’t respond to Salvo’s presence, however, even though he’s in plain sight a few feet away. Then her eyes dart randomly about, and the film’s initial murkiness suddenly makes sense. She’s blind.

What follows is an extraordinary 18-minute setpiece, confined entirely to Rita’s darkened house, in which the camera alternately follows Salvo, as he silently stakes out the best place to ambush his victim when he shows up, and Rita, as she gradually realizes that she’s no longer alone. In her film debut, Serraiocco somehow succeeds in conveying the latter without a blatant oh-my-God moment—it just becomes evident, maybe halfway through the lengthy sequence, that she’s terrified, even though she continues doing chores and humming quietly to herself as before. First-time feature directors Fabio Grassadonia and Antonio Piazza expertly sustain the tension for what seems like an eternity, pushing and pulling their two characters throughout the house; when the violence finally erupts, it occurs offscreen, so viewers must experience it as Rita does. Stop Salvo here, and it looks like a potential masterpiece.

Alas, it’s a steep downhill grade from there. Moved by Rita’s blindness and/or innocence, Salvo can’t bring himself to kill her, even though letting her live will surely incur the wrath of his Mafia boss (Luigi Lo Cascio). Instead, he locks her up in an abandoned factory on the outskirts of town, then goes about his business. The rest of the film consists of a sappy slow thaw, as Salvo, who was previously cold and taciturn, starts to be friendly with the couple from whom he rents a dingy room (being a mob hitman doesn’t pay that well, apparently) and to value Rita’s safety more than his own. Eventually, he’s willing to risk his own life to save hers, and she, in turn, is able to see him as someone other than just the man who murdered her brother.

That isn’t the only thing she can see, either. Even more disappointing than the descent into mawkishness is Grassadonia and Piazza’s decision to incorporate a miracle into the story, then largely ignore it. Salvo, for no particularly good reason, has a habit of placing his hand on each victim’s head before he blows it off, as if he’s offering benediction; when he does this to Rita, before changing his mind and abducting her instead, the film cuts briefly to her point of view, showing bright light suddenly flood her field of vision. The subject never arises in dialogue (of which Salvo has precious little), but it’s clear from Rita’s actions and eye movements that she’s no longer blind. This is such a bold development, occurring so early on, that it’s maddening just how little it ultimately matters. There’s no religious or spiritual subtext to speak of—Salvo’s personal transformation is motivated by boilerplate pity, and his relationship with Rita remains stubbornly superficial, unworthy of the power to heal. In the end, it’s Salvo itself that’s murky and obscure.