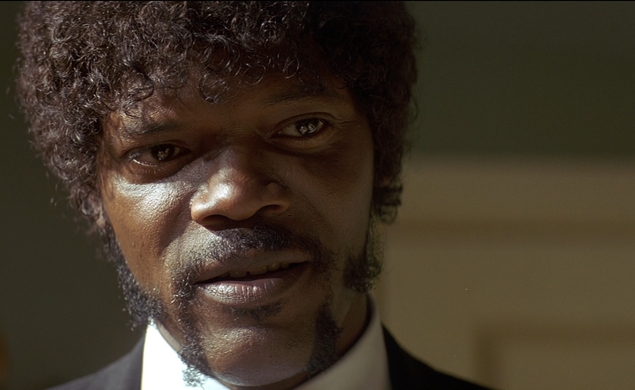 Flavorwire film editor Jason Bailey’s new book is called Pulp Fiction: The Complete Story of Quentin Tarantino’s Masterpiece. 20 years after Tarantino changed indie filmmaking forever, Bailey looks back at his breakthrough movie to reconsider what made it so brilliant and so important. Illustrated with stills, behind-the-scenes photos, and original artwork, Pulp Fiction bills itself as “the most comprehensive, in-depth book” ever published about its subject.

Here now is an exclusive excerpt from Pulp Fiction entitled “God Got Involved.” If you want to read more, Bailey’s book is available now.

“I never said, ‘I’m gonna write a redemption story,’” Tarantino told The Los Angeles Times in 1995. “But if I’m writing this big passel of characters and weaving it in, that’s what ended up coming out, because that’s what I really believe in.” It would be easy to surmise that Tarantino backed into the spiritual aspect of Pulp Fiction by accident—maybe he, like Jules, wanted to use the modified Ezekiel 25:17 quote from the Sonny Chiba movie because he thought “it was some cold-blooded shit to say,” but then, like his protagonist, he began to consider the implications of the speech.

Or it could just be that, as Tarantino says, the film’s subtle but heartfelt message about redemption and forgiveness is his own deeply held conviction. By his reckoning, Pulp Fiction “ends up being quite a moralistic film. You could even make the case that Dogs ultimately ended up being very moralistic. I never intended it to be this way but in some ways my films go by the old Hays Code. You can do anything you want in the first eighty-eight minutes as long as in the last two minutes there’s some retribution for what the characters have done.”

Pulp Fiction’s three-story structure allows Tarantino to do better than that: each of its episodes concludes with a salvation (or two, if you count the person doing the saving). Vincent Vega saves Mia Wallace from death by overdose—and in doing so, saves himself from the certain death of responsibility for her passing. Butch saves Marsellus from his brutal sexual assault (and perhaps subsequent murder) at the hands of Maynard and Zed—and thus cleans his own slate with his former employer, quite possibly saving his own life (and that of his beloved Fabienne) down the line. Both of those salvations are sealed with an agreement that the events will remain solely between the parties involved, but because the third redemption—in which Jules chooses not to take the lives of Pumpkin and Honey Bunny, and determines to save his own—is done publicly, it carries more weight.

Strangely, as it follows three Tarantino scripts (Reservoir Dogs, True Romance, and Natural Born Killers) filled with important police characters, the world of Pulp Fiction is a nearly lawless one. (Zed the “rent-a-cop” is the closest thing in the film to law enforcement, and he may be the film’s most reprehensible character.) These people, it is made clear, are on their own. Jules may pinpoint Pumpkin as “the weak” in “the valley of the shadow of darkness,” but then so are Mia, and Butch, and Marsellus, and Vincent. The latter, by ignoring the sign (be it a miracle, a freak occurrence, or divine intervention) that sends Jules on his righteous path, remains weak, the blind man, and pays the ultimate price. But we hold out hope for the other three, and for Pumpkin and Honey Bunny as well, and certainly for Jules.

Which brings us to Ezekiel 25:17. The verse is the film’s moral backbone, even if the form it appears in here bears only a passing resemblance to the real thing. “I rewrote it a little bit,” Quentin shrugged, as (presumably) did the writers and translators of The Bodyguard, the Sonny Chiba film that suggested the quotation. What we can be certain of is that, as Jules says, the speech/verse/sermon/rave-up is merely a text, recited for effect, until the epiphany that follows his near-death experience.

He clearly makes a choice to read that experience as a fated event rather than the random, “freak occurrence” of Vincent’s interpretation—a notion lent further credence by Marvin’s shooting immediately thereafter (one intended murder fails, one accidental murder succeeds; it’s all willy-nilly, the luck of the draw, how the cards fall). Jules holds firm: “Naw, naw, naw. That shit wasn’t luck.” And to that end, the discussion of whether it was a miracle or freak occurrence becomes moot—Jules believes it was a miracle and changes his behavior (and his life) accordingly.

The opportunity presents itself rather quickly, as these things sometimes do. But his actions at the coffee shop are carefully considered. He does not, first of all, choose the simplest method of saving himself, his fellow diners, and the fifteen hundred dollars tucked away in his “bad motherfucker” wallet: pulling his handgun and plugging Pumpkin and Honey Bunny. He could do it, certainly—both of them are preoccupied with the logistics of the robbery, and aren’t expecting that kind of behavior from a diner patron (see their earlier comments about cutting down on the hero factor in a place like this).

But that’s not good enough for Jules. It might have been, a few scant hours earlier, but not now. He must not only save himself and his fellow diners, but the two lost souls (the weak) God has placed in front of him, as surely as He diverted the bullets coming at Jules earlier that morning. Jules, as Gavin Smith noted in Film Comment, “survives death through ‘divine intervention,’ is blessed and cleansed by Keitel’s debonair angel, and discovers mercy.”

That mercy is the “something” he’s buying for his money, and in the closing scene of Pulp Fiction, we are given a taste of what Jules will do, and what he will (scratch that—already has become. These two common thieves aren’t just saved but tamed, sent out the door in each other’s arms, and though Jules must first wield his pistol, it is not his gun but his words that reach them. He saves them not with force but with honesty and vulnerability, not by preaching at them, as he usually does when reciting Ezekiel 25:17, but by speaking to them.

“Jules couldn’t say this religious epiphany in the same way as he’d said it before,” Tarantino explained, and he not only changes the tone, but the words themselves (the impersonal “my name is” and “thee” are transformed into the more intimate “I am” and “you”). “After using it for ten years, for the first time he realizes what it really means. And that’s the end of the film.” The experiences of this morning have not just changed Jules. They have made him into an agent of change. What could be more fundamentally spiritual than that? If such a man as Jules Winnfield can find a new path and a new place for himself in the world, who among us can’t?