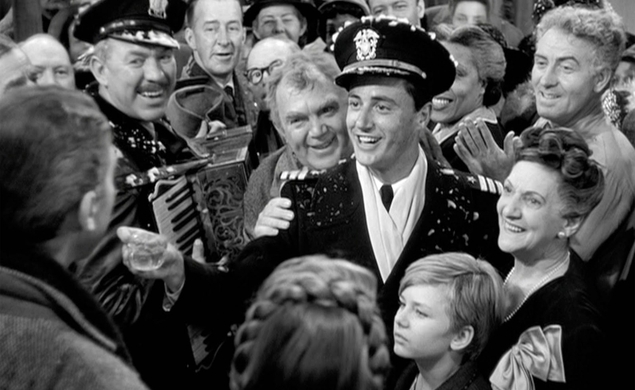 Variety’s Dave McNary reported today that a sequel to It’s A Wonderful Life is in pre-production, with the goal of shooting in Louisiana in time for a 2015 release. It’s A Wonderful Life: The Rest Of The Story will star Karolyn Grimes—whose last listed IMDb credit is an uncredited role in 1952's Hans Christian Andersen—returning as the grown-up “Zuzu,” George Bailey’s daughter who yells “Every time a bell rings, an angel gets his wings!” at the end. McNary describes plans for what sounds like a sort of Christmas Carol gloss, in which Zuzu returns “as an angel who shows Bailey’s unlikeable grandson (also named George Bailey) how much better off the world would have been had he never been born.”

The script was co-written by Martha Bolton, whose IMDb resume consists almost entirely of contributions to Bob Hope comedy specials, and Bob Farnsworth, founder of Hummingbird Productions, which specializes in ad jingles. Founded in 1976, they did the sound design for the Budweiser frogs and their current credits include the music for this Prilosec OTC ad starring Larry The Cable Guy. “I’ve probably read close to 20 scripts over the years suggesting a sequel to It’s a Wonderful Life, but none of them were any good,” Grimes said. “The script by Bob Farnsworth and Martha Bolton was wonderful, and I wanted to be involved with his version of the film immediately.”

Farnsworth will be co-producing the film with financier Allen J. Schwalb. It’s unclear how the pair got the sequel rights, which are are closely guarded by Paramount Pictures. The film’s famously complicated post-release history included years in the public domain after Republic inexplicably failed to renew their copyright. The company regained the rights due to their ongoing copyright hold on the source material, as well as a renewed claim to the score. (A more legally detailed explanation can be found here.)

Last year, what seems like a pitch trailer was put on YouTube. “Experience the children actors from the original film actually returning as the beloved elders in The Rest Of The Story,” this sort of mind-blowing trailer proposes, “and you’ll see them at the theater in color, and later in 3-D.” Also below, Farnsworth talks about the project.