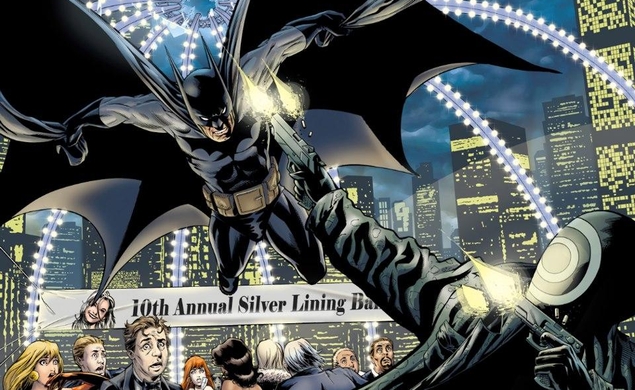 Filmmaker Kevin Smith is something of an expert on Batman. The longtime comic book fan hosts a regular podcast on the subject and even tackled his beloved Dark Knight in a series of books for DC Comics. Smith also hosted an event last weekend meant to promote the new Man of Steel Blu-ray and its upcoming, untitled sequel that will feature Superman and Batman, who’ll be played by Smith’s frequent man-muse, Ben Affleck.

On another of Smith’s podcasts, the director discussed the state of Man Of Steel 2, and acknowledged that he had seen Affleck in the redesigned Bat-suit. He wouldn’t describe the garment in detail, but claimed it looked “fantastic.” Here’s exactly what he had to say:

“I saw the Batman costume. More than that I saw a picture of him [Affleck] in the costume. Now, I don’t want to give anything away ’cause that is up to them and stuff, but I am going to say this, I instantly bear hugged [director Zack Snyder]. You have not seen this costume in a movie on film before, and for a comic book fan it was mind bending. I was like ‘Get out of here, only you have enough power to pull this off.’ Because everyone always like does this Matrix/X-Men black armor… It was fantastic. I’m already a flag waver for this movie, but the costume, it blew my mind. I think everyone is just gonna be like ‘Holy ****!’ It’s its own thing, man. It’s like we haven’t been down this path at all. I was so elated… Even the hardest core ‘**** all this’ person will be like ‘alright, I’m ready.’”

Smith’s comments suggest that Affleck’s Batman will be the first really serious visual departure for the character from the template established by 1989’s Tim Burton Batman, and the black armored costume designed by Bob Ringwood. Beyond that, we’ll have to wait and see.

In other Batman Vs. Superman tidbits, TheWrap reports that Girls’ Adam Driver is a “serious contender” to play Nightwing, Batman’s estranged former partner (he used to be Robin), while Snyder confirmed that Lex Luthor will have a major role in the sequel. But what will they wear?!? Someone get Kevin Smith on the Bat-phone.