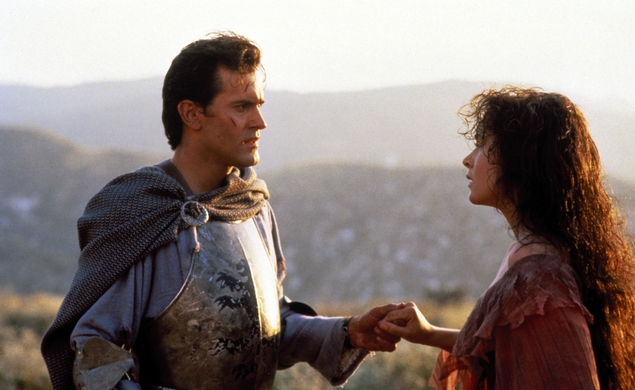 Rumors of a fourth Evil Dead movie (or a second Army Of Darkness, which was the third Evil Dead) have lingered through horror fandom for the past two decades. Kept alive by a series of comics, videogames, a movie reboot, and the eternal hopes of gore lovers everywhere, the possibility of another film about Bruce Campbell’s iconic anti-hero Ash and his wisecrack-filled war with the forces of the underworld has been a persistent, frequent topic of conversation by Campbell and director Sam Raimi since Army Of Darkness’ 1992 release. It seems like the project is always a possibility, but never a reality.

Well, apparently (allegedly [supposedly]) it is going to happen now. Speaking at Wizard World Nashville, Campbell told an audience that he and Raimi are actually getting closer to making Army Of Darkness 2. His exact quote, via Bloody Disgusting:

“The last one was twenty-two years ago. I just haven’t been racing to do it. Sam Raimi is just a little bit busy making the biggest movies in Hollywood. I used to be busy. Now I’m not. That’s why I’m here.”

After joking about a potential premise, Campbell concluded with “All right, sir, the answer is yes.”

Fool me once, Bruce Campbell, shame on you. Fool me a million times, shame on me. This sounds very similar to the stuff Campbell and Raimi have been saying to fans for a long time. But who knows? Bloody Disgusting also notes that Evil Dead remake director Fede Alvarez recently said that Raimi was actually more focused on making a new Army Of Darkness with Campbell than making a sequel to Alvarez’s film. So maybe it’ll finally happen this time? Just to be safe, I’m not going to hold my breath.

In closing, here is a Simpsons clip that succinctly describes what it feels like to be an Evil Dead fan as you wait forever for this fourth movie: