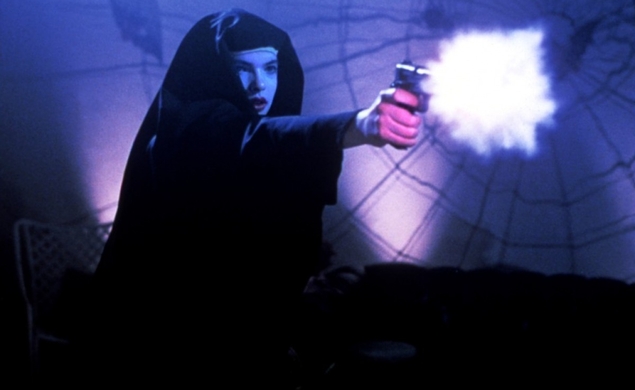 For years, Abel Ferrara’s 1981 rape-revenge-rampage Ms. 45 has been out of print on American DVD, although last year, an all-region DVD from South Korea offering a cut-down version was made available. Now, Drafthouse Films has announced its acquisition of rights to the film, which will be reissued theatrically in December before coming to North American DVD and Blu-ray for the first time. The newish distribution company (an outgrowth of the popular beer-food-movie chain) wants “to build a selection of films which destroy the barriers between ‘art-house’ and ‘grindhouse.’” That’s Creative Director Evan Husney, quoted in the press release announcing the acquisition. “Ms. 45 is one of those fringe ’80s films that has been somewhat marginalized as pure exploitation, so we are beyond thrilled to reintroduce it to a new audience of cinephiles.”

A thorough breakdown of about one minutes and 22 seconds’ worth of cuts made to the versions of the film most recently available for home viewing can be found here. Ferrara himself is in the middle of a busy year, having recently wrapped shooting on Welcome To New York, his forthcoming drama about former International Monetary Fund head Dominique Strauss-Kahn. Interviewed by Indiewire’s Eric Kohn earlier this month, Ferrara discussed his difficulties getting financing for the drama, saying Strauss-Kahn’s now ex-wife made it nearly impossible for him to get French financing. “Never mind Strauss-Kahn,” he said. “He just don’t want a fat guy [Gérard Depardieu] playing him.”

Next up is a drama about the last day in the life of Italian director Pier Paolo Pasolini, run over with his own car in 1975 under mysterious circumstances that are still fodder for conspiracy theories. There have been problems obtaining financing for this project within Pasolini’s home country as well. “I think my producer’s going to come up with the money,” Ferrara said. “We’ve got ARTE, we’ve got Canal Plus, we’ve got everybody, but we don’t have one penny from Italy.”