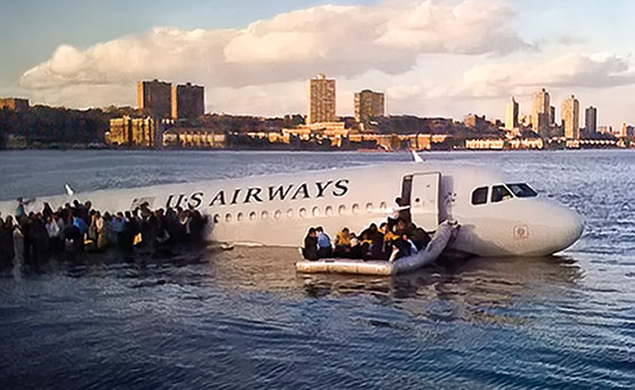 Fun fact: In the aviation business, they’ve got a specific term for when birds in flight explode into a bloody, feathery mess on the hull of an airplane like gnats on a car’s windshield. Pilots refer to this occurrence as a Bird Aircraft Strike Hazard, or BASH, and it’s usually harmless, if a bit gross. But when a group of geese BASHed into the cockpit and engines of US Airways Flight 1549, Captain Chesley Sullenberger had more to deal with than a few dead birds. Rapidly losing altitude, he executed a daring emergency landing by steering his aircraft into a controlled crash in the Hudson River. The gambit was a resounding success, with all 155 lives on board landing safely. (Second fun fact: Sully’s plane landing inspired electronic band College to write the song “A Real Hero”, recognizable as the de facto theme from Drive.)

It was a sensational story, combining danger, heroism, and a happy ending with a satisfying resolution rarely seen outside of the world of fiction. In fact, this whole affair had a cinematic bent to it: there’s a heroic adult white man with a pair of beautiful daughters and a doting wife praying that he makes it home okay, triumph over adversity in the face of overwhelming odds, thrills, chills, and the secure knowledge that everything’s going to be fine. Studios have been angling to bring this too-good-to-be-real-except-it-is-unless-like-me-you-are-a-Sully-truther story to the cineplex since the last passenger stepped off the wing of the plane, and a production has finally coalesced for Warner Bros. It’s only been a couple of weeks since Clint Eastwood agreed to handle the project for Warner Bros. in the wake of their smash collaboration American Sniper, and now Deadline reports that he’s found his Sully: Tom goddamn Hanks.

It’s a pretty perfect choice, almost to the point of obviousness. No currently working actor embodies ethically clean heroism quite like Hanks, having established his type in such films as Saving Private Ryan, Apollo 13, and Philadelphia. This project positively screams ‘rousing crowd-pleaser’, and though no release date has been set as of yet, something tells me this one will deathlessly crash into theaters sometime around next award season.