Rob Zombie to direct Groucho Marx biopic, up now down 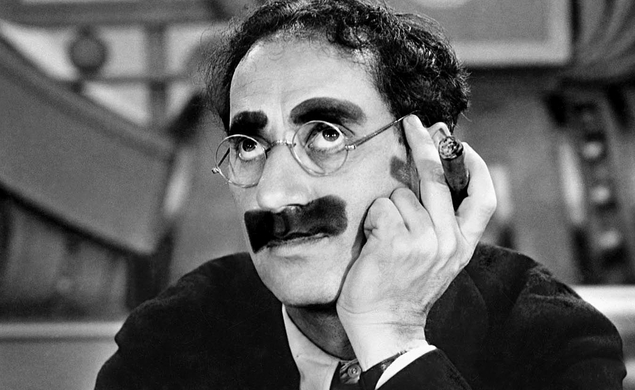 Though possibly apocryphal, all-time-great funnyman Groucho Marx was known to have said, “Outside of a dog, a book is man’s best friend. Inside of a dog, it’s too dark to read.” Horror filmmaker and former heavy metal rocker Rob Zombie has attempted to read while sewn inside several different dog carcasses, so he can attest to the veracity of this claim firsthand. In a way, then, he’s the perfect choice to helm a biopic about the Marx brother, and Deadline’s announcement that he’ll do just that actually makes perfect sense. (We’re reaching. This is completely bananas and nothing in this world makes sense to us anymore.)

It’s true, though, that the brain behind such fine films as House of 1000 Corpses, The Devil’s Rejects, and The Lords Of Salem will undertake a new film about Groucho’s final days and break into unprecedented, non-blood-spattered genre territory. Deadline reported last night that Zombie and Cold Iron Pictures have acquired the rights to Steve Stoliar’s memoir Raised Eyebrows: My Years Inside Groucho’s House, which details the comedy icon’s last days. As memoirs go, Raised Eyebrows is an odd bird; told from the point of view of a young superfan who ascended to the stations of Marx’s personal assistant during his twilight years, it’s an outsider’s look into the lives of old Hollywood’s crumbling marble statues, such as Mae West, Jack Lemmon, and George Burns. Tragically, Stoliar could only grow close to his idol just in time for them to be parted by the icy clutches of eternity.

The man to bring this melancholy tale of celebrity and mortality to the screen will be, again, Rob Zombie, though remember he paid homage to the Marx Brothers with the killer Firefly clan in his first two films and even had a film critic character offering the cops a little historical context in The Devil's Rejects. The quote Zombie provided for Deadline really does inspire hope for the project:

“I have been a huge Groucho Marx fan ever since I was a child and have read countless book on the comic legend, but after reading the book Raised Eyebrows, a totally new perspective on Groucho’s life emerged… I immediately saw this project as Groucho’s Sunset Boulevard and knew I had to bring it to the big screen. It is a sad, funny and very dark tale of a one [sic] of Hollywood’s greatest stars final years.”

That’s a solid and heartening point of comparison. But there’s still a part of me that hopes that Zombie’s Groucho project ends up being the most blandly generic, by-the-book biopic imaginable. I hope that this film by Rob Zombie includes a score of inspirational string swells in critical moments, and that it ends with title-cards laboriously explaining that today, Marx is revered as one of America’s finest humorists. I want it to become an Oscar frontrunner and for awards pundits to groan about Hollywood recycling the same biopic tropes and for Rob Zombie to win a bunch of Academy Awards. Then, once he’s got mainstream pop-culture’s attention, I want Zombie to double back and make the most twisted, vulgar, horrifying film of his career. Nothing would bring me more joy.