Our next Movie Of The Week: The Virgin Suicides 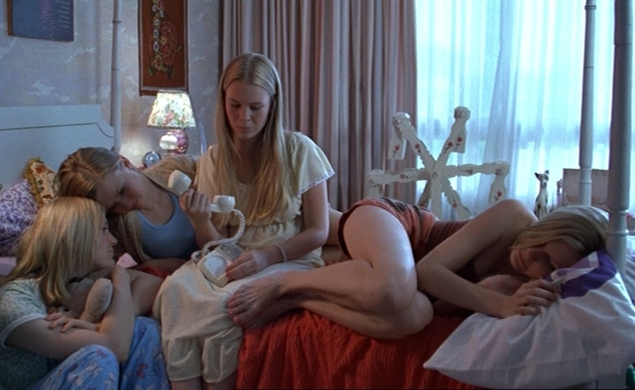 It’s rare for a new director to pull off a debut as assured and auspicious as Sofia Coppola managed with The Virgin Suicides—which, considering the film is an adaptation of a popular Jeffery Eugenides novel, is saying something. But despite the film’s faithfulness to its source material—which Coppola herself adapted to a screenplay—Virgin Suicides has Coppola’s fingerprints all over it, from her unique visual sensibility (influenced by her previous experience in photography, clothing design, and other visual arts) to the first hints of what would become her ongoing obsessions as a filmmaker (isolation, celebrity, material possessions, femininity, and more). A crime drama by way of a hazy daydream, The Virgin Suicides unpacks the beautiful, tragic mystery of the five Lisbon sisters—the cloistered daughters of a math teacher (James Woods) and his homemaker wife (Kathleen Turner)—as observed through the collective eyes of a group of neighborhood boys who puzzle over them, and their deaths, amid the washed-out torpor of mid-1970s suburban Detroit. Despite its sensationalist subject matter, The Virgin Suicides is an enigmatic, almost pensive film, one prone to fantasy, fragmentation, and dream-like reverie, all buoyed by an affecting mix of Air’s dreamy score and an on-point collection of 1970s pop hits.

Our Movie Of The Week discussion of The Virgin Suicides will kick off next Tuesday with my Keynote on how the film functions as the Rosetta Stone of Coppola’s small but specific filmography. Then on Thursday, Keith and Tasha will pick up the discussion in the Forum, while Hazel Cills will tackle how music functions as a character in Coppola’s films in her accompanying essay. We hope you’ll join us.