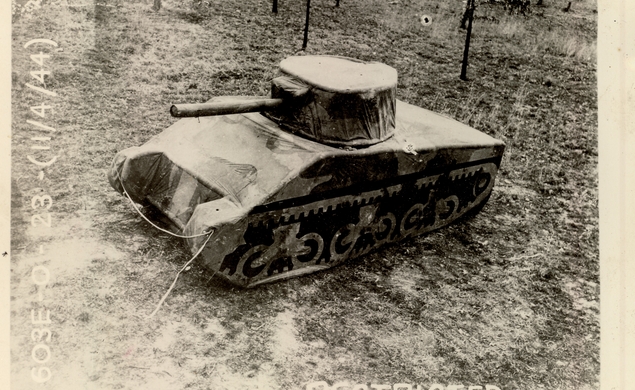 World War II truly is the gift that keeps on giving. With none of the murky morality of Vietnam or the Global War on Terror and a ready-made supervillain in Hitler and the Nazis, it has proven to be perfect fodder for films in search of a little historical heft. The staggering number of World War II pictures can be attributed to the manifold angles from which a filmmaker can approach the topic; within the greater narrative of nations at war, there were countless personal struggles and unlikely stories playing out with the conflict as a backdrop. In recent memory, The Monuments Men and Woman In Gold  have explored the lives around the periphery of battle, where bullets may not be fired but the impact of war is still all too present.

How to do this in an interesting or visually distinct way, as illustrated by the two aforementioned examples, has yet to be figured out. Deadline reports that Warner Bros. will give this approach another go with Ghost Army, a cinematic treatment of a real-life anti-Nazi effort mounted on home soil. Adapted from the book The Ghost Army Of World War II: How One Top-Secret Unit Deceived The Enemy with Inflatable Tanks, Sound Effects, And Other Audacious Fakery, the film chronicles a group of creative types tasked with fooling the Nazis into believing America was a more formidable force than it may have actually been. During WWII, the American military commissioned a group of art student, ad executives, and others schooled in the art of persuasion to falsify photographs, radio broadcasts, and any other material that would appear to confirm the presence of a vaster American army. As the rambling title of the source material would suggest, they employed such farfetched means of perpetuating their ruse as inflatable tanks, crash-test dummies posed as soldiers—and, naturally, other audacious fakery!

After the runaway success of American Sniper, Warner Bros. was eager to get Bradley Cooper back to the front. Ghost Army will run as a coproduction between Warner Bros. and 22 & Green, Cooper’s production company with The Hangover director Todd Phillips. Though Cooper has not yet signed on to appear in the film, Warner Bros. is courting the actor for an onscreen role. One key position has been filled, with Earth To Echo scribe Henry Gayden tackling the screenplay for the film. Perhaps the brain behind Earth To Echo holds the key to crafting a bolder, more substantive war-away-from-war drama.