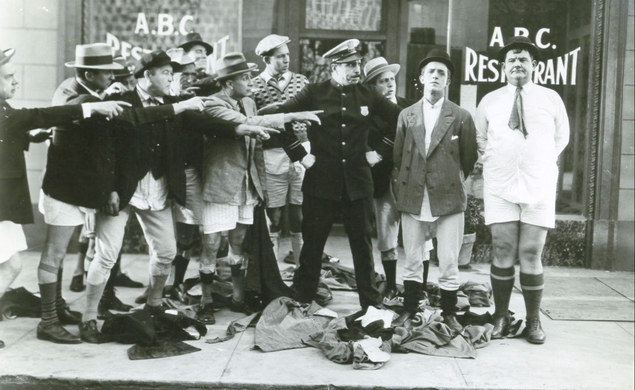 For those who like to watch films in reverent silence, Mostly Lost sounds like a nightmare. “[T]his is not a ‘sit back and enjoy the show’ type of experience,” the event’s site insists. “We ask for your continual and enthusiastic engagement during the screenings as you and other attendees shout out things as you recognize them. Anything from car models, city landmarks, actors, production companies or even the title of the film if you happen to know it—the more the better!” Why? Because Mostly Lost isn’t a typical festival but a “Film Identification Workshop,” sponsored by the Library Of Congress National Audio-Visual Conservation Center and held at the State Theatre in Culpepper, Virginia. The footage shown consists of “unidentified, under-identified or misidentified silent and early sound films,” fragments of the past for experts to watch and analyze in real time.

This year’s Mostly Lost, the fourth such workshop, has produced some pretty big news for fans of slapstick comedy. The website Silent London reports that the second reel of the Laurel and Hardy two-reeler “Battle Of The Century” has been found. One of more than a dozen films Stan Laurel and Oliver Hardy appeared in in 1927, the first year of their on-screen partnership, “Battle Of The Century” was long thought to survive only as a fragment taken from its climax, a pie fight that begins with a baker slipping on a banana peel and then erupts into a melee that turns a city street into a wasteland of crust and cream filling. If what survives isn’t the pie fight to end all pie fights, it’s close:

The first, pie fight-free, reel surfaced in the late ’70s, but there had been no further developments until this weekend, when a 16mm print of the second reel surfaced at the workshop. It’s a remarkable find. Because their most famous films come from the sound era, and because they became popular quickly, Laurel and Hardy haven’t seen as much of their work vanish or fall into disrepair as other classic comedy stars, but there are still three other Laurel and Hardy films considered lost or partly lost. (The presumed loss of “Battle Of The Century” was especially troubling because of its reputation. John Ford called it his favorite film of all time.) It’s also evidence that for as many films from that era that have been lost, there are still treasures out there waiting to see the light of day, but won’t unless we continue to support film preservation efforts. For now, fans of Laurel and Hardy (and pies, and fights), have something to look forward to.