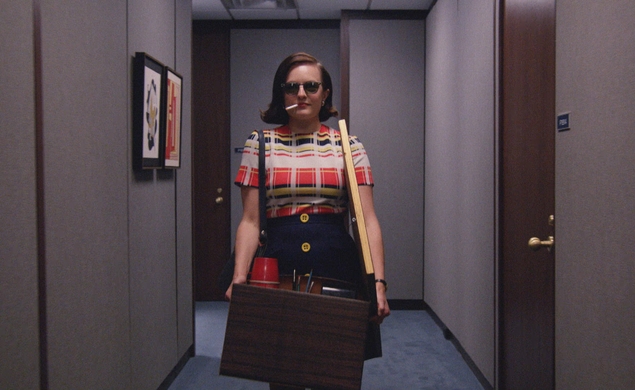 Peggy Olson may be gone, rollerskating across the hearts of the Mad Men faithful, sassily smoking her way through our collective daydreams, but Elisabeth Moss isn’t going anywhere but up. Deadline reports that Moss has signed on for not one, but two (!!) new film projects that will both play up her ability to inhabit complicated ladies.

The outlet shares that Moss will first star in Michael Mayer’s new adaptation of Anton Chekov’s classic play The Seagull, written for the screen by Stephen Karam. The feature has lined up a stellar cast so far, including Annette Bening, Corey Stoll, and Saoirse Ronan. Moss will play Masha, “a self-destructive alcoholic who hates her life because she cannot be with the man she loves.” Fun!

Although the play has continually been reinvented and relaunched for the stage, this will be the first time that Chekov’s masterpiece (as per Chekov decree, a story of one messed-up family and the slow revelation of just how messed up they are) has been adapted into a faithful, English-language version since Sidney Lumet did it in 1968 with his The Sea Gull. (Kathleen Widdoes played the Masha role.)

After The Seagull, Moss will star alongside Boyd Holbrook in Jason Lew’s The Free World, which centers on “a man trying to adjust to civilian life after being exonerated of a murder conviction and released from a long prison sentence. Moss will play Doris Lamb, a mysterious woman with a violent past whose world collides with his.”

Moss will next be seen in Alex Ross Perry’s Queen Of Earth, Reed Morano’s Meadowland (she has a small role in the drama, but it’s a bit of a show-stopper), Ben Wheatley’s High-Rise, and James Vanderbilt’s Truth (the Dan Rather film). We sure miss Peggy, but this helps.