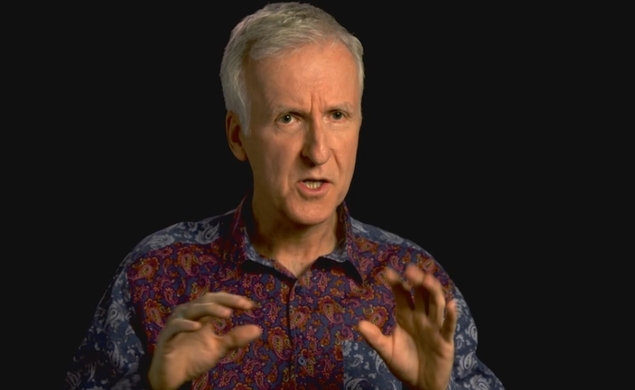 If you’re one of the people who have felt increasing disappointment upon watching each successive trailer for Terminator: Genisys, then this may come as a surprise: James Cameron, the progenitor of the Terminator series-cum-franchise, loves the new movie. In fact, he considers it the real sequel to Terminator 2: Judgement Day. (Sorry, Jonathan Mostow.) In a video provided by Paramount Pictures posted today on Yahoo!, Cameron (rocking an insane floral shirt that I kind of want?) expresses surprising enthusiasm for the film: “I’m just a fanboy.”

Cameron wasn’t involved with the 2003 Terminator 3: Rise of the Machines, in which Arnold stoically says, “Talk to the hand” to a gas-station attendant. (The series’ slippage into unintentional self-satire can probably be traced back to this moment.) That film, having nothing of import to tell us, explains how John Connor (Nick Stahl) meets his eventual wife Kate Brewster (Claire Danes). T3 made money but sort of lapsed from the public’s pop-culture conscious; if T3 has a legacy, it’s being Arnold’s final film before he became Governor of California.

Genisys, directed by Alan Taylor, who did some fantastic work on The Sopranos (including The Matthew Weiner-penned classic “The Blue Comet,” one of the best episodes of television mine eyes have ever seen), ignores the third film, and is apparently “respectful of the first.” “The originals are classics because of the characters,” Cameron says, explaining how Genisys’ Sarah Connor (Emilia Clarke) is a badass but vulnerable character. Cameron’s unique strain of feminism, which involves women kicking copious amounts of ass, is discernible in all of his films, if you consider the Jamie Lee Curtis strip scene in True Lies to be a parody of the modern action genre.

Genisys begins like The Terminator, with a (CGI-modified) Arnold demanding some punks give him their clothes; before he can ram his fist into the leader’s stomach and remove his innards, another Arnold shows up and they have an Arnold fight. Virtually every trailer has emphasized this, which makes some of Cameron’s praise seem a little odd. “It’s all about the twists,” he says, perhaps with his tongue a bit in his cheek, as he tells us about the amazing and unpredictable inversion of expectations by which John Connor becomes the bad guy.

Watch the video below, via Yahoo!