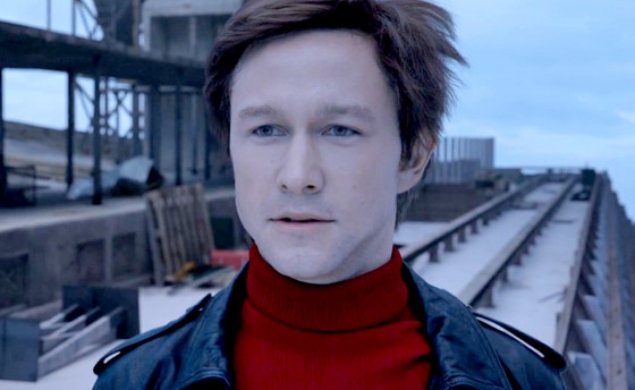 I caught the first teaser for Robert Zemeckis’ The Walk right before Mad Max: Fury Road. As I walked out of the theater, weeping beneath the late-afternoon sun (Mad Max made me cry a lot, okay?), what I recalled about the trailer wasn’t the stunning, vertigo-inducing 3-D rendering of Joseph Gordon-Levitt defying death as he teetered on a high wire strung between the Twin Towers. Nay, what has haunted my sleeping and waking hours ever since are Gordon-Levitt’s uncannily bright blue contacts, which make him look like the unlikely child of Kyle XY, a dire wolf, and Channing Tatum’s Caine Wise from Jupiter Ascending.

I can only assume Gordon-Levitt’s ice-blue gaze is a byproduct of Zemeckis’ attempt to base The Walk, at least in part, on the story of Philippe Petit, a man who tiptoed from one Twin Tower to the other across a high-wire back in 1974. Upon very close Google image inspection, Petit appears to have blue eyes. But he also has red hair, so I don’t even know anymore. Let’s move on; I just really needed to get this out.

Petit’s story was last told in James Marsh’s outstanding 2008 documentary Man On Wire, which breaks down the Frenchman’s prep for the performance and the subsequent public response. The Walk is Zemeckis’ fictional take on the tale, one that reimagines Petit as a dark-haired alien but centers similarly on the planning and execution of his wild—and illegal—adventure. Here’s the new synopsis (edited; shit is long, but I did keep the word “wizardry” in there for you), as well as the first full-length trailer:

“Twelve people have walked on the moon, but only one man—Philippe Petit (Joseph Gordon-Levitt)—has ever, or will ever, walk in the immense void between the World Trade Center towers. Guided by his real-life mentor, Papa Rudy (Ben Kingsley), and aided by an unlikely band of international recruits, Petit and his gang overcome long odds, betrayals, dissension and countless close calls to conceive and execute their mad plan…With innovative photorealistic techniques and IMAX 3D wizardry, The Walk is true big-screen cinema, a chance for moviegoers to viscerally experience the feeling of reaching the clouds.”

The trail of the tape
Title: The Walk
Director: Robert Zemeckis
Screenwriters: Christopher Browne, Robert Zemeckis
Cast: Joseph Gordon-Levitt, Ben Kingsley, James Badge Dale, Ben Schwartz, Charlotte Le Bon, Clément Sibony
Release date: October 2, 2015
The entire trailer in one line of dialogue: “When people ask me, ‘Why do you risk death?’ For me, this is life.”
The entire trailer in one screengrab:

Otherwise, this trailer is tres amusement, at least for the first half; as Petit enthusiastically preps for his jaunty, law-breaking little stroll, the tone feels fast-paced and cocky, like a lighthearted heist film. (“I got just the guys!”) But the second half brings things (tumbling rapidly) down to earth, as Petit’s friends and advisors tell him he’s fucking crazy and definitely going to die. All fair and understandable reactions to the situation at hand.

The Walk is slated to open the New York Film Festival in September.