Our next Movie Of The Week: White Men Can’t Jump 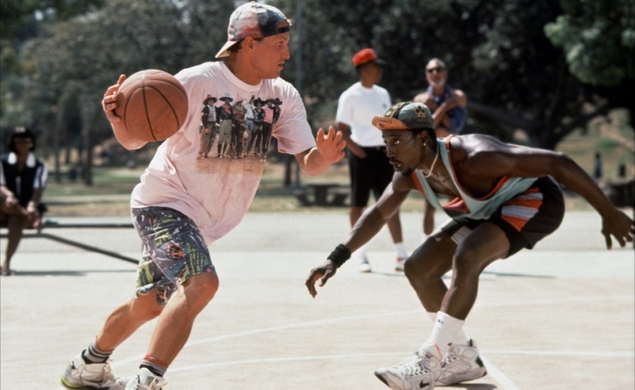 When we sat down at our weekly editorial meeting to discuss future Movie Of The Week candidates, I proposed, not for the first time, Ron Shelton’s White Men Can’t Jump, the best movie ever made about the game of basketball. (Just as Shelton’s Bull Durham is the best baseball movie and Shelton’s Tin Cup is the best golf movie.) Things got contentious. Here’s how it went down:

And with that, the court was cleared: White Men Can’t Jump is our Movie Of The Week, picking and rolling off the 2015 NBA championship series. But the great thing about this and all Shelton sports movies is that he cares more about has-been and never-was athletes than the guys who rose to sporting glory. The Ron Shelton hero is often talented—if, in the case of Kevin Costner’s minor-leaguer in Bull Durham, not quite talented enough—but have some Achilles’ heel that’s holding them back. White Men Can’t Jump is a mismatched buddy comedy focusing on two self-destructive streetball hustlers, played by Wesley Snipes and Woody Harrelson, who have the moves to conquer the L.A. scene, but the fatal instinct to sabotage each other and themselves. Shelton fills the movie with hilarious trash talk—“Yo Mamma” jokes, psyche-outs, chest-thumping braggadocio—and a great feel for the streetball con game. But he also fleshes out the tenuous relationship between these two men and the even more volatile relationship between Harrelson and his wife (a terrific Rosie Perez), who nurses dreams of appearing on Jeopardy!. (Perez’s pronunciation of Mount Vesuvius ranks alongside the “Fight The Power” montage in Do The Right Thing as a career highlight.)

Next week, The Dissolve is goin’ Sizzler with my Keynote on “The Shelton Touch” in White Men Can’t Jump on Tuesday, a Forum discussion between Noel Murray and Tim Grierson on Wednesday, and a basketball “By The Numbers” feature on Thursday that offers a statistical breakdown of hoops movies that’ll put Nate Silver out of business. (Provided that our percentages add up to 100, which they frequently don’t.)