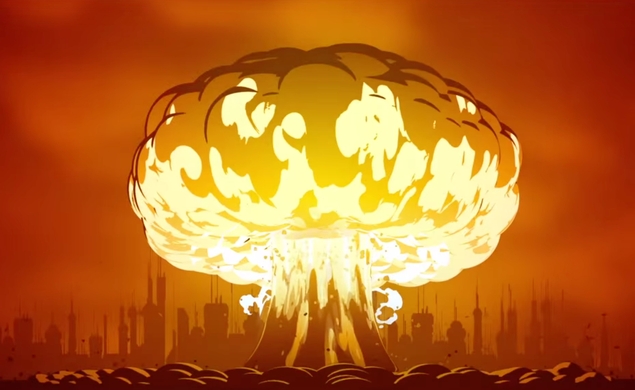 Back in April, Tomorrowland co-writer/director Brad Bird tweeted out a link to an unlisted (and still surprisingly little-seen) bonus for the movie: a three-and-a-half-minute animated sequence, created by Bird’s buddies at Pixar in the heavily Art Deco-inspired style used for the credits sequence at the end of Bird’s Pixar movie The Incredibles. The sequence was meant as an intro to the secret brain trust that built Tomorrowland, and was meant to appear in the movie as part of the introduction on the ride young Frank uses to infiltrate the futurist enclave. But Bird ultimately cut the scene from the film, deeming it to be unnecessary backstory that slowed down the narrative. He has a point—this clip is largely redundant with the exposition that remains in the film, about the necessity of embracing the future rather than fearing it, and about mankind’s propensity for doom. There’s a lot of stating the obvious in this clip.

It’s mighty pretty and stylish, though. And while it raises a question or two on its own (notorious rivals Thomas Edison and Nikola Tesla working together? I want that film more than I wanted this one), it also helps clear up a couple of the many baffling mysteries hanging over the film, like what the Tomorrowland plan was in the first place (a big public reveal after 20 years, which got derailed) and why (spoiler!) the Eiffel Tower is a rocket ship. I mean, the trailer doesn’t explain it in detail, but the site of the brain-bank’s founding, and the inclusion of engineer Gustave Eiffel in the original trust, all suggest it was built that way in the first place, rather than retrofitted at some random later point for some random reason.

At any rate, the sequence isn’t necessary for the movie, or vice versa; it’s a manifesto and history lesson rather than a story segment, so spoilers are pretty much nonexistent. For those who didn’t watch the clip when Bird first put it out, now’s the time. Unless you’re waiting for a better future than this to arrive first.