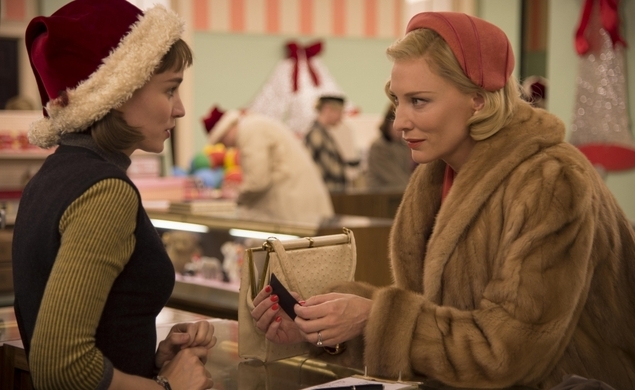 Over at Cannes, where everybody is having a much cooler day than we are, Todd Haynes is running the game with his latest film, Carol, an adaptation of Patricia Highsmith’s 1952 novel The Price Of Salt starring Cate Blanchett and Rooney Mara as women who fall in love and have to deal with the fallout. IndieWire called the film “a love story that starts at a trickle, swells gradually to a torrent, and finally bursts the banks of your heart,” while Variety wrote that the film is “exquisitely drawn, [a] deeply felt love story that teases out every shadow and nuance of its characters’ inner lives with supreme intelligence, breathtaking poise and filmmaking craft of the most sophisticated yet accessible order.”

Our own Mike D’Angelo wrote, “His visual style, in concert with Carter Burwell’s plangent score, does much of the emotional heavy lifting, allowing Mara and Blanchett to strategically underplay their characters’ ardor; it’s been a long time since the movies have seen a romantic fuse burn quite this slowly and steadily. ” In other words, Carol is already a festival favorite, a likely candidate for the Palme d’Or, and is even garnering Oscar buzz already, which, like, c’mon film industry, we JUST finished writing about the Oscars, can we live?

So it follows that Haynes, who is definitely still at Cannes, drinking champagne and lighting $100 bills on fire, is already lining up several high-profile projects. IndieWire reports that Haynes is working on a “limited TV series” based on The Source Family, a documentary about a cult living in California in the 1970s. Haynes, confirming the news, gave a canned quote that sounds like it was handed down from the leaders of the cult we call “cable television”: “The cable world is offering directors a new rage of opportunities,” he said. “There's a healthy sense of competition within cable and streaming entities now, they're actively looking for problematic subject matter and characters who are not just lovable. That's encouraging.”

On the film front, Haynes has signed on to direct Wonderstruck, an adaptation of Brian Selznick’s award-winning novel. The book tells a story split between two separate time periods, one of which is conveyed using words (imagine!), the other using only pictures. Here’s the synopsis:

“Ben and Rose secretly wish their lives were different. Ben longs for the father he has never known. Rose dreams of a mysterious actress whose life she chronicles in a scrapbook. When Ben discovers a puzzling clue in his mother's room and Rose reads an enticing headline in the newspaper, both children set out alone on desperate quests to find what they are missing.

Set fifty years apart, these two independent stories--Ben's told in words, Rose's in pictures--weave back and forth with mesmerizing symmetry. How they unfold and ultimately intertwine will surprise you, challenge you, and leave you breathless with wonder. Rich, complex, affecting, and beautiful--with over 460 pages of original artwork--Wonderstruck is a stunning achievement from a uniquely gifted artist and visionary.”

It will be interesting to see how Haynes pulls this one off. Will half of the film be silent? Will the other half just be a black screen? Or will he merge the two together—words and pictures!—and create an art form the likes of which the world has never seen?