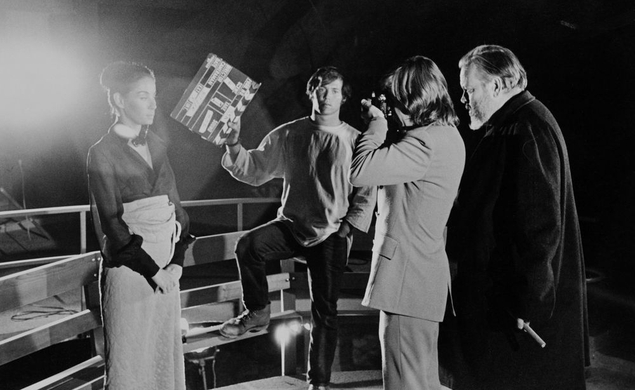 When Orson Welles died in 1985, he left behind a multitude of projects in various states of completion. It’s easy to daydream about what would have happened if Welles had, for instance, gone through with his POV adaptation of Heart Of Darkness instead of Citizen Kane. Or if he’d completed The Deep, a thriller based on the same source material as Philip Noyce’s Dead Calm that Welles reportedly got within one scene of finishing in the ’60s. Or Don Quixote. Or The Merchant Of Venice. Or on and on and on. Now one film looks like it might see the finish line: The Other Side Of The Wind.

The story of a director (John Huston) trying to make a comeback, The Other Side Of The Wind was shot between 1970 and 1976, with Welles working sporadically in his rented home under the constant threat of losing his money and his stars. Though footage of the film has surfaced over the years, most prominently on the F For Fake DVD and Blu-ray, it’s never come close to being assembled into a final version. That the elements of The Other Side Of The Wind were in tucked away in a Paris warehouse and an object of dispute from various parties made it seem like it never would be.

Last night, on what would have been Welles’ 100th birthday, The Hollywood Reporter broke the story that the disputes had been resolved and that the five-year effort of producer Filip Jan Rymsza had paid off. Having obtained the elements of the film, including a “pristine” negative, Rymsza and producers Jens Koethner Kaul and Frank Marshall—the latter of whom worked as a PA on Wind—are trying to piece a finished cut together based on Welles’ extensive notes. To that end, they’re trying to raise $2 million via an Indiegogo campaign. The project is working toward a January 2016 release.

It would be an unlikely (but welcome) ending to a strange story that’s the subject of a recent book, Josh Karp’s Orson Welles’s Last Movie: The Making Of The Other Side Of The Wind, which is currently sitting at the top of The Dissolve’s nightstand. (Karp also recently condensed the story into an article for Vanity Fair). Will it be a last masterpiece to bookend a career that began with Citizen Kane? A bizarre patchwork that betrays its rag-tag origins? Either way, it will certainly be something to see.