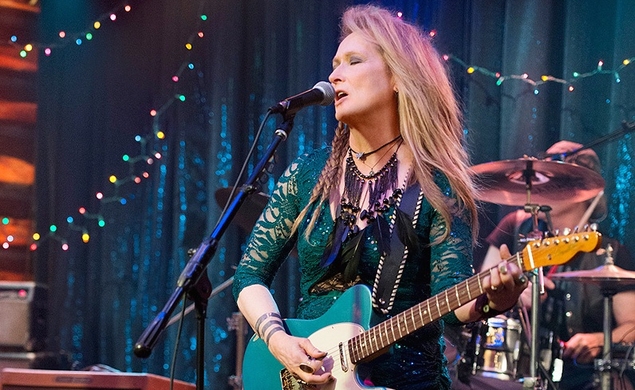 Few things in this world are genuinely beyond debate, but the likely superiority of a film that stars Meryl Streep as a cover-band singer who shirks all manner of grown-up responsibilities in order to rock out in scuzzy bars (alongside Rick Springfield, naturally) and sing Bob Seger songs is one of them.

Jonathan Demme’s Ricki And The Flash sounds excellent, but what the film’s first trailer supposes is, well, maybe there’s some stuff here you didn’t realize would be so excellent and essential until you saw it with your own eyes, like Meryl Streep and Rick Springfield making out in a twin-sized bed, or Meryl Streep blithely showing off a giant American flag back tattoo, or Audra McDonald ripping Meryl Streep a new one, or even Mamie Gummer looking so genuinely and purposely horrible and broken-hearted that you want nothing more than to hug her through the screen. Meryl Streep, Meryl Streep, Meryl Streep, etc.

The Diablo Cody-penned feature centers on Streep’s Ricki Rendazzo, the long-time lead singer of the eponymous Flash, who has abandoned just about everything else in her life—husband, kids, “dressing her age”—in order to rock out on the road. It looks like a pretty excellent life (again, making out with Rick Springfield in a twin-sized bed), but when heartbreak strikes one of her own children (Gummer, Streep’s real-life daughter), she’s called back to “real life” to do some mom-ing.

Turns out, when you leave your husband and kids in order to sing cover songs in sticky bars, they don’t take too kindly to it! As Ricki grapples with her own spawn’s tremendous pain, she’s also forced to address her part in it and maybe—just maybe!—grow up a little on the way.

This first trailer hits all the right notes, but it does seem to suffer from too-much-itis, and while we’re hopeful the final film will pack a few surprises, this trailer does seem to lay out the bulk of the story in the minimum of time.

It may be imprudent to declare your love for a movie that has not even hit theaters yet, but let’s throw caution to the wind: I love Ricki And The Flash.