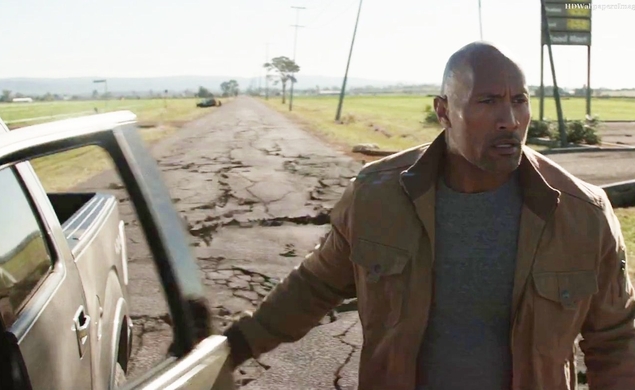 In the forthcoming San Andreas, The Rock, The Person takes on his faultiest foe yet—The Rock, The Earth—as it threatens to take down millions via an earthquake of epic proportions. Previous trailers for the film have lingered languidly on shots of California cracking open at the seams, of panicked herds of people being crushed by falling debris, of Carla Gugino waking up in a cloud of dust and jumping improbably from a burning building into The Rock’s cute little helicopter—all set to the bleak sounds of a relentlessly dour “California Dreamin” cover.

But in the wake of last month’s devastating Nepal earthquake, The Guardian reported that Warner Bros. was re-evaluating its marketing campaign for San Andreas. According to a studio rep, after thousands were killed in Nepal, Warner Bros. wanted to ensure its future ads were “sensitive to people affected by the tragedy.”

Enter the latest trailer, which dropped today and is rife with even more shots of Cali collapsing in on itself, buildings toppling onto people, cruise ships toppling into buildings, and tsunami waves trapping people in underwater prisons—all set to the sounds of The Rock breathing very heavily in his cute little helicopter (and that goddamn The Mamas & The Papas cover again).

But! At the end of the trailer, a title card pops up that reads: “Disaster can strike at any moment. Learn more. Help others. Be prepared.” It directs viewers to PrepareAndHelp.com, a website that… directs to other websites (albeit helpful ones, like the American Red Cross and Ready.gov, which has info and preparedness tips for earthquakes and other natural disasters).

Does that mean this new trailer is “sensitive”? Well, not 40 seconds before compelling us to “be prepared,” it features a shot of scientist Paul Giamatti saying, “We can’t stop it, we can’t prepare for it. It will be a global event.” So.

This trailer does seem to shift its focus slightly to The Rock’s heroism—Kalinda from The Good Wife cheerfully notes that he’s documented “more than 600 rescues,” implying that all is not lost and he’ll be able to save a significant number of Californians from their state’s hungry, gaping maw. The spot also fleshes out The Rock’s relationships with his family, namely, the semi-contentious state of affairs with his ex-wife Emma (Gugino), whom he apologizes to in the opening scene for “how I acted yesterday,” then saves from the aforementioned flaming building.

It looks like that flaming building might be just what The Rock and Emma needed to rekindle the flames of their love. Will the cracked earth heal their cracked hearts? Will the ocean between them disappear as the oceans between our planet’s continents overflow and drown millions? Will the active faults rendering the Earth obsolete make them forget their own active faults?

Sorry, that was insensitive.