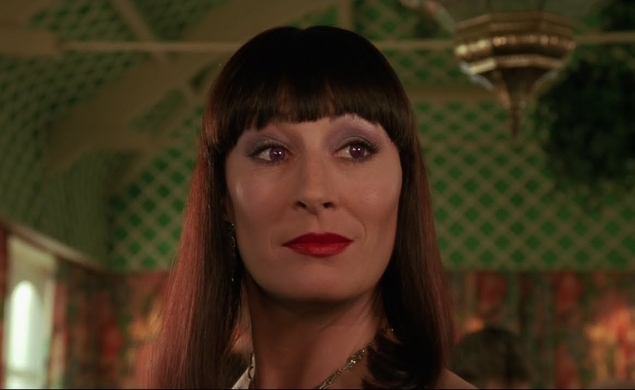 Though Nicolas Roeg directed many great films in the 1970s—including Walkabout, Don’t Look Now, and The Man Who Fell To Earth, just to name a few—he was not exactly on a roll heading into The Witches, his 1990 adaptation of the Roald Dahl book. Castaway, his segment in the abysmal anthology film Aria, and Track 29 may have their defenders, particularly the latter, but he was an unlikely choice for a Warner Brothers-distributed children’s film from Jim Henson’s production house. But the choice turned out to be an inspired one: Though Roeg sacrifices some of himself in service of a big production, his baroque sensibility and willingness to go to dark places is perfect for this particular Dahl, even if the author wound up hating the altered ending. It’s also an ideal vehicle for Anjelica Huston, who plays her wicked imperiousness to the hilt as Miss Eva Ernst, a Grand High Witch who heads up a secret convention with other witches staying in a large countryside hotel. Jasen Fisher is less impressive as the little orphan boy who discovers the convention and tries to put a stop to it, but he’s eventually turned into a mouse and Henson’s cute/grotesque creature effects start to take center stage. The Witches is far from the crowning jewel of Roeg’s filmography—the ending is compromised—but he and Huston take it to much scarier and funnier places than more timid children’s films are willing to go. The Witches airs on Saturday at 1:45 p.m. ET on HBO Family.