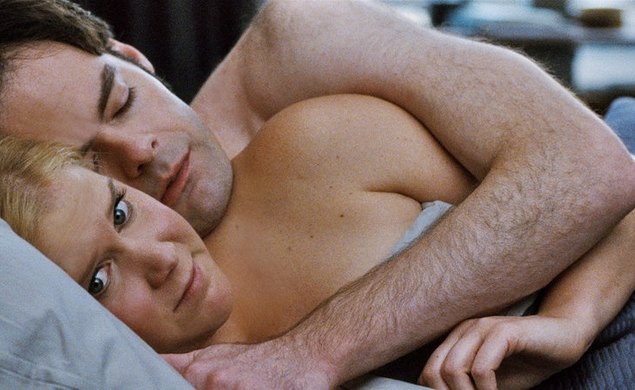 The New York Times’ Julie Bloom looks at the movies seeking laughs with sex scenes:
“The sex comedy has also become a framework for challenging the comedic form, and writers and actors, some with backgrounds in standup, are clearly pushing the boundaries of taste by upending social norms — whether it’s a straight man’s one-night stand with another man (The D Train), absurd fetishes (The Little Death), female promiscuity (Trainwreck, Sleeping With Other People), or raunchy language and graphic physicality (The Overnight, The Bronze). Here, the stars and filmmakers from those films talk about what embarrassed them, what might embarrass audiences and what’s so funny about sex. These are excerpts from the conversations.”

ScreenCrush’s Matt Singer abandons sleep, reason and sanity to write about a 27-hour Marvel Movie Marathon:
“Odin help me. By the time you read this, I will be on my way to “The Ultimate Marvel Marathon.” It’s 11 films back to back to back; all the official entries in the Marvel Cinematic Universe, from 2008’s Iron Man to this week’s Avengers: Age of Ultron. By the time the final credits roll, I will have sat through — and hopefully written about — approximately 27 hours of superhero movies.

There won’t be many surprises. I’ve already seen every movie in this marathon at least once, and I’ve seen a couple upwards of four or five times. In fact, I attended the previous “Ultimate Marvel Marathon” before the release of the first Avengers movie. That was actually a lot of fun (except for the woman I sat next to who repeatedly took pictures of the screen and posted them on Facebook), but it was also only about 14 hours. At more than double that, this Ultimate Marvel Marathon is pushing the limits of mental and buttock-ular endurance. By any measure, this is a titanically stupid idea.”

The Village Voice’s Stephanie Zacharek on why Avengers: Age Of Ultron fills her with despair:
“Despite its supernatural elements, Buffy showcased Whedon's gift for finding high drama within the parameters of the mundane — he knew it didn’t need finding there, because that’s simply where it lives. Maybe that should make Whedon a natural for bringing a group of much-beloved Marvel comic-book characters to the big screen, where he’d have a wider frame to explore the glories and vicissitudes of friendship and loyalty, as well as the everyday stress of being charged with saving the world. The Avengers movies give Whedon a bigger palette, along with that bigger screen, to work on. But with their valley-of-the-giants scale of visual extravagance, their adherence to the slice-and-dice school of editing that’s now a requirement for any action movie that aspires to be a hit, and their staid approach to teamwork, loyalty, and life-and-death struggles, they have also crushed and flattened the texture of everything that made Whedon’s work and vision amazing in the first place. The Avengers, those paragons of flawed individuality who find their great strength in working together, have made Joss Whedon just like everybody else.”

Little White Lies’ David Ehrlich thinks Not Another Teen Movie is a masterpiece:
“In a recent interview with the Wrap, Evans was asked to reflect on Not Another Teen Movie, the 2001 comedy that provided his big break. Self-deprecating but careful not to sound ungrateful, Evans laughed at the thought of his first leading role: ‘The movie had me stick a banana in my ass, it wasn’t exactly some highbrow art.’ Both parts of that statement are at least partially false. In the scene to which he refers, a gender-swapped parody of Ali Larter’s iconic ‘whipped cream bikini’ from Varsity Blues, the banana appears to be affixed to his ass, not lodged in it. Also — and more importantly — Not Another Teen Movie may not be highbrow, but it is most definitely art. Stop lying to us, Chris. Stop lying… to yourself. Not Another Teen Movie is a fucking masterpiece.”