Our next Movie Of The Week: Little Shop Of Horrors 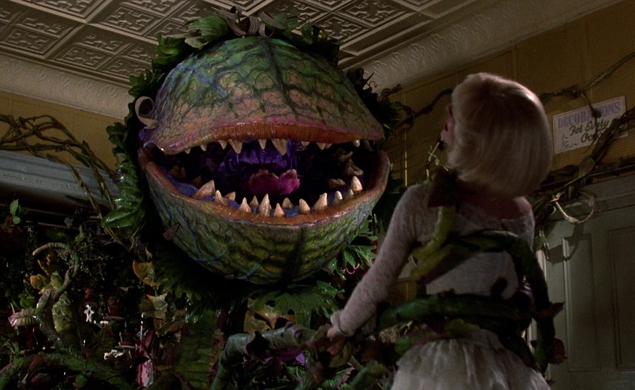 As pointed out a few months back by Dissolve contributor Andrew Lapin, the movie musical is currently in a state of flux, with the genre struggling to find itself amid the competing demands of modern viewer sensibilities, cinematic technological advancements, and a tentpole-fixated studio system. We could spend days arguing what the last great non-animated movie musical was—and please, feel free to do so in the comments—but next week, The Dissolve will highlight one of the contenders for that title when we take on Frank Oz’s Little Shop Of Horrors for Movie Of The Week. Adapted from a 1982 stage musical that was adapted from a 1960 Roger Corman comedy-horror film, Oz’s 1986 adaptation represents a perfect blend of stage and screen. It marries B-movie conventions to the musical-theater stylings of Alan Menken and Howard Ashman to the practical-effect innovation of Oz and his puppeteer compatriots, including Brian Henson, who brought new life to carnivorous alien plantform Audrey II. It’s one of those movies that exists in that magical place between the stage and the screen, utilizing the conventions of each to create something new, exciting, and unforgettable. Centering on the Faustian bargain made between dweeby flower-shop employee Seymour Krelborn (Rick Moranis) and a strange plant he discovers following a total eclipse of the sun, Little Shop is a strange little beastie of a story, full of legitimately disturbing ideas—sadistic dentist, shudder—filtered through Broadway conventions, buoyed on Ashman and Menken’s unbeatable songs and brilliant performances from Moranis, Ellen Greene as his love interest Audrey (I), and The Four Tops’ Levi Stubbs as the voice of Seymour’s evil plant. (Not to mention the comedic stylings of Steve Martin and Bill Murray, turning in one of the great one-scene-wonder performances of all time.)

Our Little Shop Of Horrors discussion will kick off on Tuesday with my Keynote essay on the film as the platonic ideal of the movie musical, with an accompanying Forum discussion. Then on Thursday, Darryn King will take a closer look at Little Shop’s famously excised original ending, which Oz had to replace when it went over horribly with test audiences. (Silly test audiences. It’s such a great ending.) We hope you’ll join us next week, down on Skid Row.