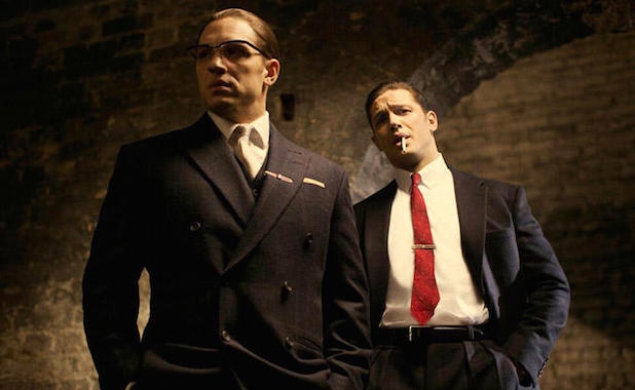 Tom Hardy playing twins could be confusing—any single person playing twins could be confusing, just look at Lindsay Lohan in The Parent Trap, or Hayley Mills, um, also in The Parent Trap—but the star’s new true-life crime drama makes differentiating between brothers Ronald and Reginald Kray dead easy: One of them wears glasses, the other likes to don a hat from time to time. Fantastic!

The Kray twins were notorious gangsters in the 1950s and ’60s, the kind that just sort of ran wild around London and looked pretty cool while doing it. Their exploits have been covered before in Peter Medak’s solid 1990 film The Krays—starring Martin and Gary Kemp from Spandau Ballet, who just happen to be appearing in a doumentary we reviewed this week—and this first trailer, set to the class-A warbling of Roy Orbison’s “Running Scared,” plays up their violent nature and slick sartorially choices. If anything, it looks like the film will mostly be about Hardy and Hardy running people over, standing around in a menacing fashion, and oh, what’s that, maybe even fighting over a girl (Emily Browning).