Superheroes looks at the strange sub-culture of self-declared avengers 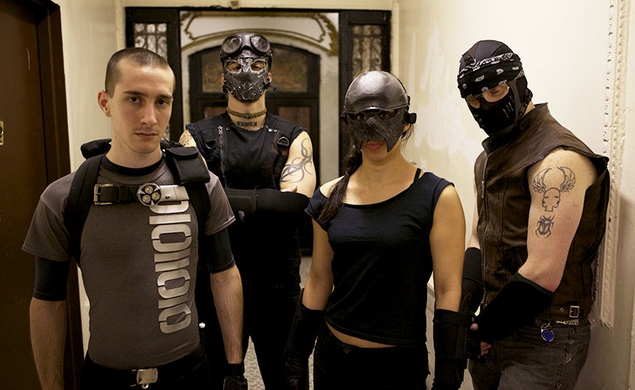 Before he made a gazillion dollars directing the movie with the space raccoon who wears people clothes, cult filmmaker James Gunn made a deeply personal, brazenly non-commercial little 2010 independent film called Super, starring Rainn Wilson as a distraught man who becomes a vigilante after losing his wife, and Ellen Page as his bloodthirsty, overly enthusiastic sidekick. Super asked, “What it would be like if a pathetic sad-sack, beaten down by life and fate, decided to fight crime by beating evildoers—and the merely unpleasant—to death with a wrench?”

Superheroes suggests a documentary version of Super, although thankfully none of the self-styled real-life superheroes are anywhere near as psychotic as the protagonist of Super, who belongs in jail for mass murder. If these eccentrics are a danger to anyone, it’s themselves. They’re a well-meaning lot, even if they seem more than a bit ridiculous.

Directed by Mike Barnett, the film documents characters like the pot-bellied, beer-swilling “Master Legend,” a dumpy middle-aged man who looks like he’s eternally cosplaying an off-brand version of The Tin Man. Master Legend seems as interested in hitting on college girls in bars as he is in putting away evildoers. He also seems to be something of an alpha-weirdo among this pack, and it’s touching how deeply his equally odd peers revere him.

The homemade superheroes here share a number of features, most notably difficult childhoods during which they were bullied and abused by classmates. This deep psychic scar seems to have left them with a need to make the world a kinder, more just place, even if it means promenading about in public looking like lunatics. Like Batman, they want their costumes to inspire. Instead, they provoke ridicule rather than awe, both from the public and their friends and families.

The filmmakers are sympathetic toward their subjects, but they can’t help needling them a little. One superhero, for example, talks about how his life isn’t that different from anyone else’s in that he works and then he comes home to his girlfriend. Asked about his girlfriend, the would-be superhero specifies that he was merely speaking rhetorically. The film is littered with moments that suggest a Christopher Guest-like satire of communal self-delusion, as when a subject who calls himself Mr. Xtreme, the head of the Xtreme Justice League, reluctantly concedes that as of the filming, he is the only member of his Xtreme Justice League.

The film talks to psychologists, Stan Lee, and law-enforcement officials, all of whom agree that while the impulse to fight crime as a common citizen may be a noble one, it can also lead to injuries, death, or simply wasting a whole lot of time. And, honestly, the good things that these self-styled superheroes do, like organizing food and clothing drives and helping the homeless, are enterprises anyone with a little civic spirit can pursue without feeling the need to give themselves ridiculous names and silly costumes.

The subjects here seem fundamentally harmless. Remove the larger-than-life comic-book mythology and what you’re left with is essentially a nationwide Neighborhood Watch group that looks like it escaped Comic-Con. But as the Trayvon Martin case tragically proved, terrible things can happen when ordinary people decide to take the law into their own hands. Superheroes suggests that the real heroes are not the weirdos who put on homemade costumes and pretend to be superheroes, but the legitimate lawmen who grudgingly tolerate their delusions of grandeur with a patience that borders on superhuman.